0
SHARES
0
VIEWS
Share on FacebookShare on Twitter
Recently two training injuries involving police officers occurred almost back-to-back, one in Ohio and another in California. During both occasions, firearms that were thought to be free of live ammunition were not. Fortunately the guns were not pointed directly at anyone, but the ricochets and indirect fire caused several injuries. This reinforces the two firearms safety rules. One, treat all guns as if they are loaded, all the time; and two, never point a gun at anything you are not willing to destroy. 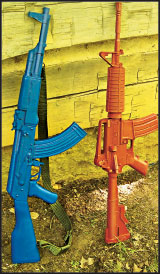 Basic marksmanship training is conducted on the square range where the vast majority of officers are competent and safe in that environment. However, if you are going to use a firearm in a defensive manner you need more than simple marksmanship training, you need to have gun-handling skills as well.