0
SHARES
13
VIEWS
Share on FacebookShare on Twitter
GAS Match attendees are greeted by the iconic and ubiquitous Raven logo on the entranceway arch upon arrival.Photo Courtesy Gunsite

Certainly no stranger to firearms competitions, this was my first time attending Gunsite Academy’s GAS—Gunsite Alumni Shoot. Even though this is a competition, the environment is different. This is all about fun, camaraderie, and a family atmosphere. That is just not something you often see in competitive matches—even local ones. Often the competitive side of things tends to take over and the rest is a side note. On the other hand, matches that are all about fun with absolutely no practical side are of no real interest to me either. There really needs to be a balance, and as it turned out there was no disappointment here. It was truly some of the most fun you could ever have at a shooting competition.

Alumni Match
This match is a Gunsite tradition and has been going on since the late 1970’s. Jeff Cooper founded it as a, “Social event only slightly interrupted by gunfire.” It is as much a customer appreciation day as a competition. In order to attend the match you need to have completed at least a 3-day class at Gunsite. There is as much food as there is shooting, and the primary goal is enjoyment not necessarily winning. It attracts shooters from all over the world—one shooter from Spain was not only there for the match, but attended the AK-47 class with me the following week. 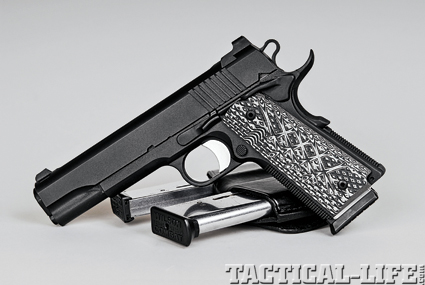 Guncrafter’s “Pistol With No Name” was the author’s chosen pistol during the GAS Match. He came away very impressed with it. Martin Hing Photo

This is truly a family event. Husband and wife teams were prevalent and entire families were the norm. Families like the Siverts have been coming there for years, and winning often. I even bumped into an old acquaintance of mine who had brought his son with him to shoot as well. Shooting with them throughout the match was a blast.