Handguns are not the best defensive weapons. If we know a fight is coming, a gun with greater power is a better choice. Unfortunately we can’t carry long guns around with us on a daily basis. We carry handguns because they are portable and concealable, which is not necessarily efficient. Thus, the most powerful handgun that we will have on our person when we need it is the best choice for defense. This explains the popularity of the compact .45ACP.

However, it may not be the best choice for all people. A small gun shooting a large, heavy bullet can be difficult to control unless you are both a practiced and experienced shooter. Such a gun requires a certain level of commitment on the part of the end user. If you are such a person, then the new Heckler & Koch HK45 Compact .45ACP might be the gun for you.
The early 1990s brought us the Universal Self-loading Pistol (USP) from the folks at HK. These hammer-fired handguns proved to be both robust and reliable and they became quite popular around the globe. Not a company to sit back and rest on its laurels, HK updated this line as years progressed, which resulted in such guns as the P2000, P30, full-size HK45 and now, the new compact HK45C .45ACP.

These guns have a different look from the blocky USP; a substantial amount of material has been removed from the slide. Interchangeable grips have also been added to better fit a wider range of hands. Like all firearms from HK, these guns can be counted on in a life-threatening situation. In a world of compromise, some don’t. Yes, HK firearms cost more, but how much you pay for a gun to defend your life is up to you. Would you compromise?

Gun Details
Developed from the start to be a defensive handgun, the HK45 Compact will easily fit the requirements for a concealed carry handgun. With an overall length of 7.2 inches, height of 5.06 inches and a width of 1.14 inches, this gun is a true compact but not a sub-compact. Like the USP, the HK45C can be purchased with any of 10 trigger systems, but this gun came with (at my request) the LEM (Law Enforcement Modification) trigger that offers a short length, hammer-fired, double-action-only (DAO) mechanism that’s easy to train with and shoot.

The LEM is my preferred action due to its simplicity and ease of use. Other variants offer decock and safety levers for both right- and left-hand shooters. Since the HK45C comes standard with an enlarged, contoured, ambidextrous magazine release as well as slide lock levers on both sides of the gun, the LEM makes this a true “everyman’s” pistol.

To offer the power of the .45 cartridge in a compact as well as controllable package, HK integrated a very effective recoil reduction system into the pistol’s design. This system can potentially reduce as much as 30 percent of the gun’s felt recoil, an important feature for rapid follow-up shots! While none of us likes to think that we will miss, it can happen, especially during a gunfight. Helping shooters get back on target fast is a desirable feature.

Both the HK45C and its big brother, the HK45 are rated for +P ammo and offer a service life of at least 20,000 rounds. Both pistols also have polygonal rifling in the barrel as well as a rubber O-ring at the muzzle for increased slide-to-barrel lock, which increases accuracy, velocity and service life. For those agencies or individuals that have special needs, a threaded barrel can be added for the addition of a suppressor.

A crucial feature on any combat handgun is high visibility sights. The HK45C LEM is equipped with a set of swept back, Novak-style three-dot sights that are filled with Luminova material. Luminova is a chemical compound that glows in the dark once it has been introduced to a light source for a few seconds. The initial glow is four times as bright as tritium, making them very easy to see in all light levels.

As mentioned earlier, the grip has multiple backstraps built into a thin grip frame that has fine stippling on both the front and backstraps. This rough texture does a great job of catching the hand, especially when the hands are sweaty or, heaven forbid, bloody. The frame is manufactured from a high strength polymer that was originally created by HK engineers for the VP70Z and the P9S pistols. While designing their pistol for the Mark 23 SOCOM pistol project, they made the formula even stronger and now offer the strongest polymer frame in the industry.

The frame has a Picatinny rail incorporated into the dust cover to receive white lights and laser sights, a feature that is becoming more popular with those who face threats in reduced or inconsistent light environments. A gun-mounted light allows one to wrap both hands around the pistol grip, reload or clear malfunctions, which certainly enhances not only accuracy but efficiency as well.

The slide of the HK45C is certainly sleeker and more concealable than the USP Compact. Rear and forward cocking serrations are cut into the slide so that a solid grip can be obtained. Some argue the forward serrations are unnecessary and that the forward “press-check” is unsafe. To each his own, I guess, but I have been performing this action on my pistols for over three decades and my hand has never gone forward of the muzzle.

Range Time
I started out by testing the gun’s accuracy with various ammo styles. Since this is a defensive/combative firearm, I chose ammo that I know is a good choice for this purpose based on testing and street results.

I don’t care much for bench resting a combat handgun. Working the trigger is part of the process, especially with a fighting handgun, so I also like to test the gun from an unsupported firing position as well. Being able to separate one’s trigger finger from the rest of their hand is the hardest part of handgun shooting and many people (myself included) spend their entire lives trying to master the technique. A short and smooth trigger action makes this much easier and the LEM trigger from HK is just such a trigger.

I carried the HK USP40 Compact while I was assigned to Narcotics and this gun had the LEM trigger. I really took to that gun and it was through the LEM trigger that I felt that I had really learned that elusive concept of trigger control. The LEM trigger on my test gun offered a first trigger press of 6.5 pounds with subsequent triggers breaking right at 4.5 pounds. The reset distance of the LEM was just over 0.25 of an inch, which made fast follow-up shots much easier. The LEM also eliminates the need for a decocking lever on one side of the pistol or another. In addition to the very manageable trigger, the HK45 Compact also offers the enhanced reliability of a hammer-fired system.

Carry Options
Once the accuracy testing was completed, I shot the gun for several more days, off and on, and became very fond of it. I could not find a holster made for the gun at the time of the test, so I used a nylon bandage-style rig from BlackHawk and it worked just fine. In addition, I found a Greg Kramer horsehide inside-the-waistband (IWB) holster also fit the HK45C. For those of you who have not tried a Kramer holster, you are really missing out on something special. Not only is horsehide more durable than cowhide, it also “grabs” the gun less on the draw. Once the holster is broken in, the gun breaks cleanly from a horsehide holster with less drag. I have been focusing on Kydex for the last few years, but using this Kramer rig again made me realize that a call to Greg Kramer is long overdue.

Final Notes
I am glad to report that I had no malfunctions at all with the test gun. It fed everything I put through it and was a real pleasure to shoot. Would I buy this gun? You bet! If you are looking for a compact .45 with a short, but continuous trigger with no safeties to manipulate, this is your gun. Check it out quickly, as I think these will be popular and hard to get. 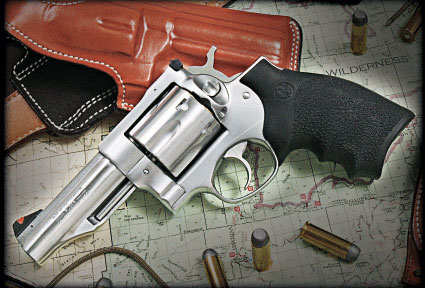 The Ruger Redhawk .45 LCP revolver is a rugged and reliable big bore now...