0
SHARES
178
VIEWS
Share on FacebookShare on Twitter
Small, sleek and light, the Hellcat .380 ACP double-action-only is well-suited to fill the personal security needs of a wide range of citizens.

Palm-sized .380 pistols have been among the hottest items in the gun community for several years. The demand started as an increasing number states made the right move and allowed citizens to carry concealed for their own protection. Furthermore, an increasing number of states are including “Castle Doctrine” laws on their books, which mean that citizens no longer must retreat within their own homes. Make no mistake, such laws are not a “license to kill” just because an offender is on your property, but they do offer the option of self-defense. Of course an armed response is only as good as the gun and the person holding it, and that gun should be selected carefully.

When selecting a personal security sidearm, it is wise to give due consideration as to what exactly you want from the gun. Will it be used for daily carry? If so, size and weight will be a consideration. If it is going to be for home protection alone, then size and weight is less important as the gun will probably reside in a stationary location. Many people have decided their carry and home defense gun will be one in the same, which tends to lead them to small, pocket-sized guns—thereby bringing us back around to the palm-sized .380 pistol. 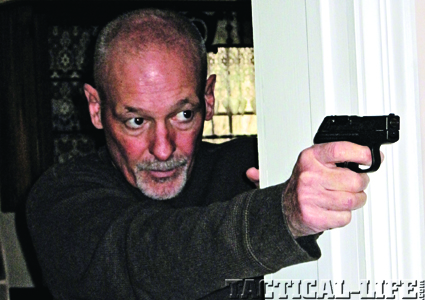 While some will opt for a larger pistol, a daily carry gun can do double duty as the home protection handgun.

With this in mind, the U.S.-made Hellcat from I.O. Inc. is a polymer-framed double-action-only pocket pistol that is small in size but robust in feel. Designed in the same vein as the Kel-Tec or Ruger LCP, my test gun came with one magazine and a zippered carrying case and is priced under $250—placing it right in the category of gun many folks are seeking.