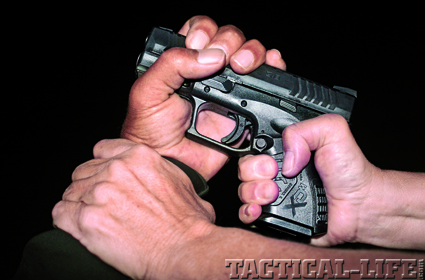 Our country has a long and conflicting history of “people taking the law into their own hands.” In California, before there was organized law enforcement, communities evolved their own “vigilance committees” to deal with violent criminal gangs that they felt could be dealt with in no other way. It was from these “vigilance committees,” predating organized law enforcement, that the term vigilante was born. Sometimes, they brought law and order to their communities. But, sometimes, they became their own kind of “gangs.”

Remember the old saying, “One man’s freedom fighter is another man’s terrorist.” In the same sense, one man’s “vigilance committee” is another man’s “lynch mob.” One is good, one is bad, and which is which depends on whose party is currently in power and whose morals are currently in vogue.

By pursuing a threat and potentially employing deadly force, you are at risk of putting yourself into legal and physical danger.

Let’s look at another very old concept, “citizen’s arrest.” It was born in the ancient English Common Law, in a time long before Sir Robert Peel established what would become the London Metropolitan Police of today, which in many ways was the role model for the law enforcement establishment of the Western world, and of the United States. Citizen’s arrest dates back to a time when there was no community police department as we know it now. It was understood that if a criminal did an evil deed, the rest of the citizens who saw it happen were duty-bound to raise a “hue and cry.” That is, they were expected to shout “Stop, thief,” and chase the malefactor…lay hands upon him and restrain him…and hold him in custody somehow until the next time a magistrate of the King came through the Shire to dispense the justice of the land. It was the best they could do at the time. But, as times change and evolve, methods of due process and public perception change and evolve, too.

Now, in the early 21st century, we find an interesting dichotomy. If a criminal does a bad thing and a bunch of witnesses—or perhaps a lone eyewitness—should chase and capture him, and do so without killing him, the local newspapers will say, “Heroic Citizen Captures Mugger!”

However, if the suspect turns on the pursuer and violently attacks him, and the citizen pursuer has to hurt him or even kill him, the headline will very likely become “Vigilante Charged in Murder of Fleeing Thief.” Don’t blame me, folks. I didn’t make society what it is. But if you doubt the above assessment, do some research and see for yourself.

Case One occurred recently in the Northwestern United States. A man reported a burglary to the police. Frustrated that he had been ripped off, the man went looking for the burglar (after the police had left) taking a pistol with him. He found the guy. He stopped his car, jumped out, and ordered the man to halt. When the man lunged at him, he raised his pistol and pulled the trigger. The shot proved fatal.

The suspect was hit behind lateral midline by the fatal shot. Any trained professional would have at least considered the possibility that when the man lunged at the homeowner as if to disarm him and kill him with his own weapon, the man spun away before the shooter could stop pulling the trigger. I wasn’t there for the trial, but the bottom line is, the homeowner was tried for the shooting in criminal court, and convicted.

The collective assessment of those on the ground where it happened who followed the case is this: The jury perceived the homeowner to have gone looking for trouble, found it, and at the first opportunity vengefully killed the man who had stolen from him.

Do you think that’s justice? I don’t, necessarily. But what you and I think doesn’t matter. What the jury thinks is what matters.

Case Two occurred in the Southwest. Homeowner faces off with dangerous thug on his own property. Thug flees.

Homeowner follows and catches the guy. The man he’s trying to capture at gunpoint under the citizen’s arrest principle turns on him and tries to disarm and kill him. Homeowner shoots him dead. Citizen is convicted of manslaughter. Jury’s perceived rationale: the homeowner “went looking for trouble” and created the situation in which he wound up shooting the deceased.

Think that’s unfair? Me too. But you and I weren’t the jury. The people who did constitute the jury came in with the guilty verdict.

Case Three went down in the Deep South, where some think “pro-gun sentiment” and “pro-self-defense sentiment” among the majority of the public make it okay for good guys to shoot bad guys at will. Not hardly—the homeowner heard his wife screaming that someone was breaking into their home, and he grabbed his gun to go to her aid. Throwing open the front door, he saw a stranger with an object in his hand, and screamed at him to freeze. Instead, the man came toward him in the dim light, the object still in his hand, and in fear for his and his family’s lives, the homeowner fired.

His bullet killed a foreign exchange student who had been invited to a costume party, and had come to the wrong address. The object in his hand was a camera, not a weapon. The husband and father who fired the shot in that mistaken-identity situation was cleared on manslaughter charges in criminal court, but was absolutely hammered by a judgment against him in civil court. Those involved in the case seemed to agree that if he had stayed inside his house and protected his wife and kids he would have been fine, but that his opening the door and engaging a man outside created a perception that he had “gone looking for trouble.” 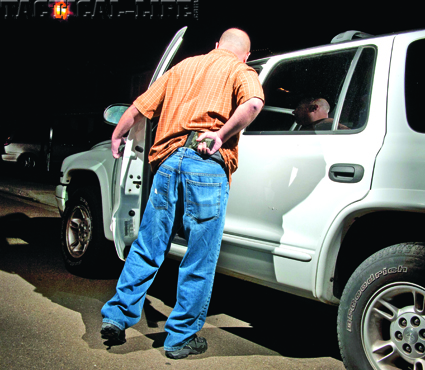 Many years ago in the South, I was retained as an expert witness in Case Four. The police officer who was the defendant was part of a task force issued warrants to serve on people the judge who signed the warrants determined needed to undergo search of their homes pursuant to possible arrest. The officer made entry. Suddenly, a man rushed at him and grabbed the officer’s Sig Sauer pistol, obviously attempting to disarm the uniformed and clearly identifiable police officer. In the course of the struggle for the gun the pistol discharged, sending a 115-grain Federal jacketed hollowpoint bullet into the body of the man who grabbed the gun, killing him outright.

It turned out that the warrant had been issued for the wrong address, and the dead man was not the criminal suspect the police were looking for. The officer was tried for manslaughter… and he was acquitted.

My take on it was this—the officer was acting in the performance of his duties, and in good faith. The jury recognized this, and recognized that while the officer was “looking for trouble,” the very job description of a police officer is “looking for trouble.” The screw-up on addresses was the fault of someone else, not the officer assigned to serve the warrant. I felt then and feel now that while a terrible mistake was made within the totality of the criminal justice system in Case Four, the officer who was holding the gun when the fatal shot discharged was not the person at fault.

I think this is worth saying one more time, though it has been said already: I don’t necessarily think it’s wrong for a private citizen to have the courage to deal with violent criminals… but it’s not about what I think, it’s about what the criminal justice system calls “the triers of the facts” think.

But if you do not have to go looking for trouble, the collective lesson in this time and place is… don’t go looking for it in any way, shape, or form. 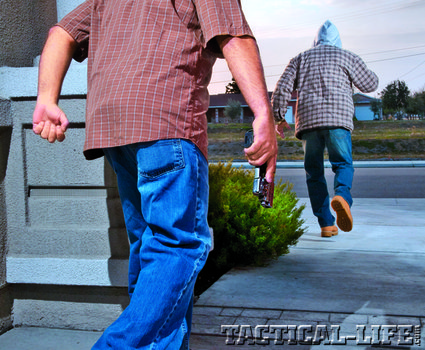 Chasing the robber from your home or place of business seems instinctive but may not be wise—especially with a gun in your hand!

In Case One, if I were a private citizen as opposed to being an assigned police officer, I would not have gone looking for the perpetrator. If you find the perp, the nature of the confrontation will be unpredictable, and it may turn out as ugly for you as it did for the understandably outraged citizen in this actual case. I don’t think anything the burglar took would have cost as much as what the homeowner lost in emotional devastation and legal fees before the verdict against him was rendered, let alone what it cost him after he was convicted for having been seen as “the guy who went looking for trouble.”

In Case Two, if I were the citizen who had been threatened with deadly retribution by the man who fled from me, I would not have pursued. 39 years of working within the criminal justice system has taught me that the aggressor is seen as “The Bad Guy.” Cops chase criminals; it’s their job to do so. This is simply not the case for private citizens. The hypocrisy of our society is that if it turns out well you’ll be a hero, but if someone is killed or crippled you’ll be seen by society as the “vigilante.”

In Case Three, I would do my very best to overcome instinct and not chase the threat, but instead lock my doors to keep the threat outside once I knew my mate and cubs were safely inside. If the intruders break in, the sympathy of the jury lies with the defenders. Once you go outside the safe fortress, you’re seen as the aggressor.

In Case Four, as a police officer I would have had to do what the officer did in that case, and serve the warrant I was duty-bound to serve. The reason is that, if you think about it, “looking for trouble” is the very definition of a policeman’s job description! The unfortunate confluence of circumstances that turned a routine warrant service into tragedy in Case Four was not the involved officer’s fault, and the jury ultimately understood that.

In America in the year 2012, if you are mandated by society as an officer sworn to uphold the laws of that society, you’ll do what you have to do… and, as in Case Four, you may still be accused of wrongdoing and go through a devastating personal and family nightmare. 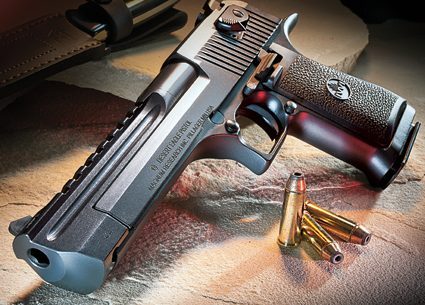 The Mark XIX Desert Eagle .44 Mag is an Israeli-produced powerhouse that sets the... 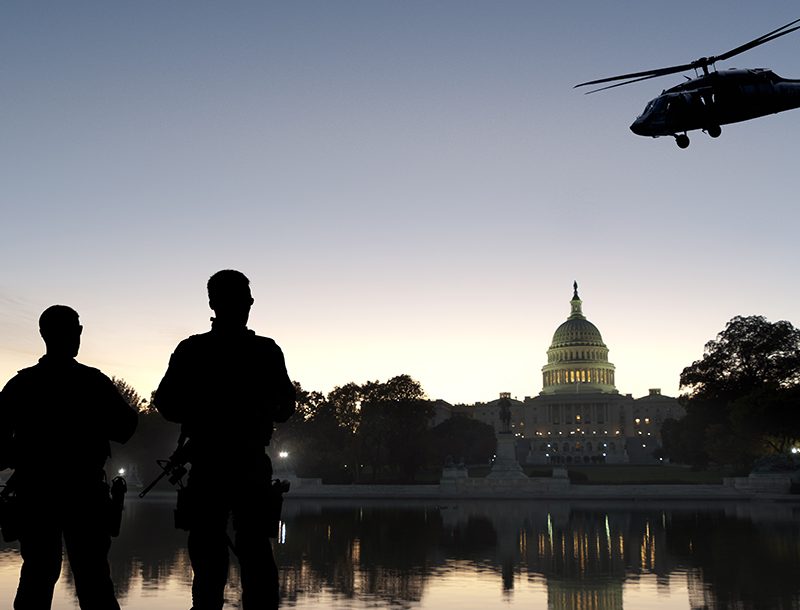