by Jorge Amselle
in Combat Handguns
0

45
SHARES
114
VIEWS
Share on FacebookShare on Twitter
It may look like it is built for Hollywood, but every custom built feature on this pistol is designed to increase performance downrange.

Like most gun owners I shoot because it’s fun, and also because I take my personal protection seriously. Unfortunately most of us don’t have the time or resources to engage in significant amounts of training. Going to the range on a regular basis certainly helps but can get tedious. Shooting competitions, however, offer real challenges, training, and fun for anyone.

Whenever you have any manner of competition you will invariably have those who seek to be the best at it and when it comes to shooting lots of practice and outstanding equipment makes all the difference. One company that excels at making sure competition guns perform is SJC Guns (or S&J Customs), co-owned by John Nagel and Steave Breeding. 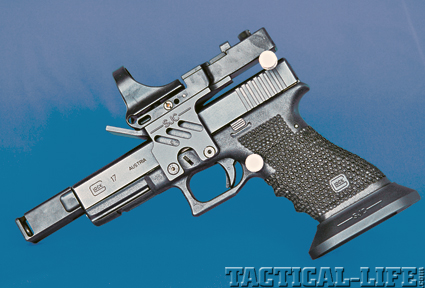 Built by competitors for competitors, SJC adds match-grade parts and custom touches designed by the owners themselves.

SJC focuses solely on enhancing the Glock pistol for high-speed shooting and its guns have helped several world-class shooters win national championships. In fact, SJC built the first Glock to be used to win the open/race gun category in a world title in 2006, the Winchester World Challenge, which Dave Sevigny won. Sevigny also went on to use an SJC gun to win the 2010 Steel Master title at the World Speed Shooting Championship, and in 2009 Jessie Abbate shot an SJC to win Ladies Steel Master at the Steel Challenge. Dozens of world championships have been won with SJC guns. 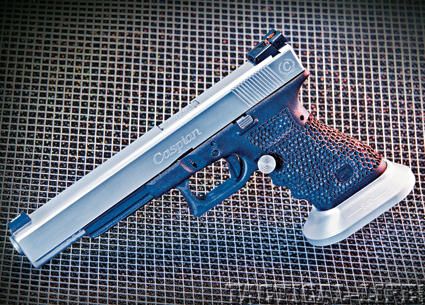