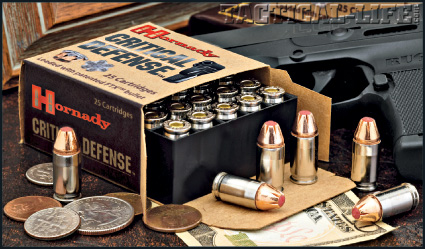 There have been numerous attempts to quantify the performance of defensive handgun ammunition. Among the more credible studies, were the tests conducted by the FBI Firearms Training Unit. Initiated in 1989, the FBI ammunition testing protocol consisted of a series of performance-oriented tests to assess a bullet’s performance standards.

Ammunition was fired into 10 percent ordnance gelatin, a tissue stimulant that replicates the density of muscle tissue. In addition to bare gelatin testing, rounds were also fired through common obstacles in police action shootings, such as heavy clothing, glass, sheet metal and wallboard. Recovered bullets were weighed and measured, and depth of penetration noted. An assessment as to a bullet’s ability to inflict a wound after defeating intervening obstacles was generated.

They provided a uniform, standard protocol for ammunition testing, and many manufacturers now have improved ammunition that can defeat common obstacles that still reliably expand after striking a threat. The FBI test protocol got us where we need to be today, particularly in the development for law enforcement ammunition.

There have been numerous attempts to quantify the performance of defensive handgun ammunition. Among…