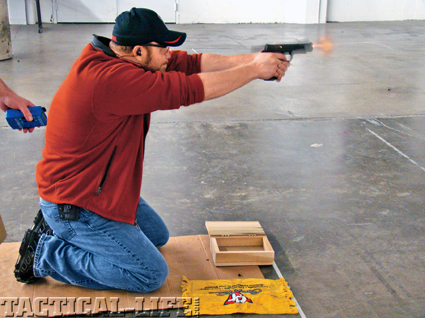 Just getting to the World Championship in IDPA obviously takes a tremendous amount of dedication—and most importantly, practice!

“World Champion.” Fewer words have more meaning to any athlete, who will strive for years for that one moment to be at the top of their sport—to reach the pinnacle and stand as unquestioned champion and master of their field. Until 2011, the International Defensive Pistol Association (IDPA), had never crowned a World Champion. That all changed in the pouring rain of Frostproof, Florida.

IDPA’s Growth
My experience with the International Defensive Pistol Association began back in 2008 in a small town named Atlanta…Indiana. The Atlanta Conservation Club was holding their monthly IDPA match, and I was fresh off getting an Indiana carry permit, so I figured “let’s do this!” Needless to say, I showed up with a bad gun for the game in a terrible holster, and I got stomped. But I also got hooked, and soon thereafter I had picked up my first 1911, which I still have, and shot my first state championship match… where I also got stomped, but learned alot.

Somewhere between that time and September of 2011, I got better. I kept shooting, kept practicing, and last year I became one of only 13 people that have achieved the rank of Master class in all five of IDPA’s division. IDPA divides shooters at matches up based on two criteria—division and classification. Your division is based on what gun you shoot, and the five divisions break down like this: 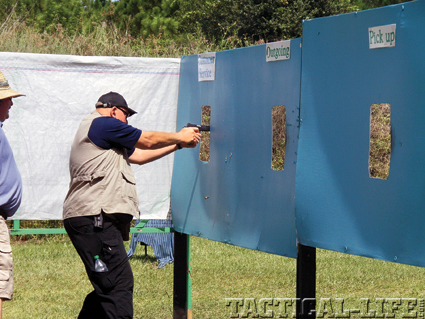 In the first ever IDPA World Championship, competitors needed all their skill to navigate the tough courses of fire.

IDPA further breaks shooters into groups based on classification. Your class is determined by shooting the IDPA Classifier, a 90-round match consisting of all the fundamentals of IDPA. The ranks in IDPA are then determined by your score on the classifier. You can qualify in any of the following ranks: 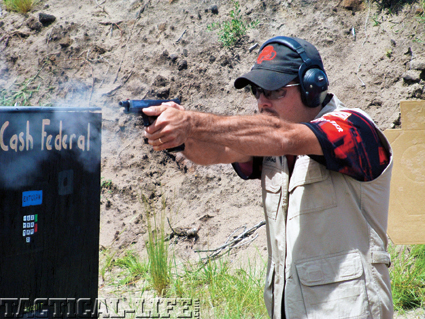 Stock Service Pistol Champion Bob Vogel shows his winning form on the final stage of the match, utilizing his extensive skills with a handgun to win out in the end.

2011 Championship
With shooters from all over the world divided into their appropriate classes and divisions, the inaugural World Championship at Frostproof, Florida got underway with the safety officers shooting the match on Wednesday and Thursday. To say they dealt with inclement weather is a bit of an understatement, as Florida dropped plenty of rain on the shooters over the course of the match; but not even pouring rain could stop this great match. My squad showed up on Friday morning at Bay 1, Stage 1 to get things started. We were in for a wild ride.

IDPA and the volunteers that ran the match really outdid themselves with stage design; the IDPA World Championship featured more moving targets than I’d ever seen in a single match. There were swingers, turners, swinging no shoots, and one stage where every single target moved in some way. The designers didn’t neglect the classic “speed shoot” stages either, there were just enough “stand and deliver” stages to create a balance of complex scenarios and “hoser” stages.

My match started rough—Stage 1 had two moving targets that for some reason I decided to stare at for what felt like an eternity before I got any rounds on them. That trend repeated through the “front nine” of the match, where moving targets would freeze me in hesitation. I managed to keep from losing too much ground by rocking the speed shoots, but hesitation and trepidation definitely impacted my performance on day one. By the time Day Two rolled around, I had slipped enough that a top ten finish was out of reach. And because of that, something crazy happened—I shot like a champ. With the match out of reach, on day two I uncorked one of the best shooting days of my life. Swingers, turners, and a clay pigeon were no problem as I shot fast, accurately and generally had a great day. It wasn’t enough to get me back in the top ten, but it was enough to lock up a category championship. 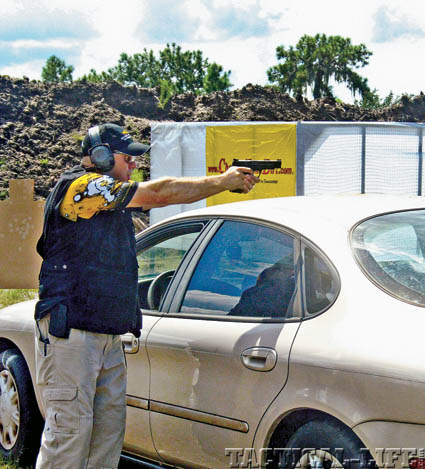 Competitor uses his Smith & Wesson M&P Pro to battle through a stage in the SSP division, which turned out to be a roller coaster match.

Top Shooters
IDPA recognizes several special categories as well as the standard divisions, with world titles being awarded to the best woman shooter (High Lady), several titles for international shooters, High Military Veteran, Most Accurate, and of course the High Press award going to the member of the firearms media with the best score. Winning High Press was a tremendous honor for me.

While I was riding the roller coaster of match performance, Bob Vogel was putting on a clinic on how to win a world title. Bob posted the best time outright on 15 out of 22 stages while dropping the second fewest number of points of any shooter at the match. Bob would dominate Stock Service Pistol and the entire field, taking the Stock Service Pistol title by over 40 seconds. The top three shooters in SSP finished like this:

In IDPA’s original flagship division, Custom Defensive Pistol, Glenn Shelby and David Olhasso battled back and forth for much of the match, with Glenn pulling out to a lead in the late stages and taking home at CDP World title. CDP is a tough division, requiring more reloads due to the lower magazine capacity, but Glenn and David both posted times that were better overall than many shooters in ESP and SSP.
Enhanced Service Pistol was the only division without a Distinguished Master, but that didn’t stop James McGinty from putting on a great match. James shot like he forgot his name wasn’t “Vogel,” taking ESP by nearly 30 seconds. Morgan Allen and Greg Martin battled it out for Second Place, with Morgan taking it by just over three seconds.

However, the best battles of the match were in the revolver divisions. Enhanced Service Revolver has long been ruled by none other than Jerry Miculek, and this year was no different. However, Cliff Walsh, who is the only shooter to beat Jerry at the USPSA Revolver Nationals in recent memory, gave him a run for his money. Jerry and Cliff swapped stage wins back and forth over two days, with each shooter having their time in the lead. After the dust had settled, Jerry Miculek emerged with the first Enhanced Service Revolver World Championship—another trophy to add to his storied career in the shooting sports.

My favorite division is Stock Service Revolver; there’s something delightfully old-school about this division with its six-shoot revolvers fed from speedloaders. SSR was a battle of two Distinguished Masters–Craig Buckland and Josh Lentz. You couldn’t write a better script about this match up; Craig is a veteran shooter having been around the sport for years, and Josh is the up and comer. Just like in ESR, Craig and Josh went back and forth. As the match progressed, Craig built a lead which he was able to maintain through the end. After an impressive competition season, Craig took home the Stock Service
Revolver world title.

Looking Ahead
After four days, 387 shooters completed the match. Each shooter fired around 300 rounds; in that weekend at Frostproof around 110,000 rounds of ammo went downrange. People made new friends, caught up with old friends, honed valuable skills, swapped stories—but most importantly we got out there and shot. Regardless of individual skill level, people from all over the world shot a match in Florida in September because they love the shooting sports, and I can’t think of a better reason than that to do what we do. Thank you to IDPA for a great match, and I’ll be back in 2012 for more. For more information, call the International Defensive Pistol Association at 870-545-3886 or visit idpa.com. l 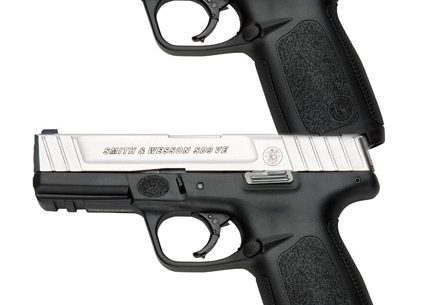