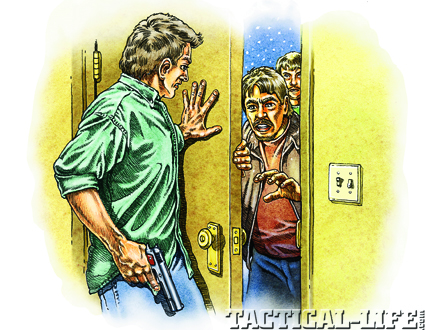 It was a chilly February night, and being too wired to sleep from my swing shift at the warehouse, I decided to do my taxes. As I flipped through the schedules, I could hear grainy snow rattling onto the swimming pool cover at my apartment complex. I could also hear the crunch of snow underfoot and muffled voices.

The knocks at my door were tentative at first, then insistent. As I reached into my unlocked file cabinet drawer, the knocks became arrogant. I popped a full magazine of .45 hardball into my Series 70 Colt 1911, racked the slide and set the safety. At this point the knocks were now more like pounding. I tucked my Colt behind my heavy leather belt at 8 o’clock and stuck another full magazine in my left hip pocket. Before I opened the door, I anchored the sole of my left workboot into the carpet.

The three of them were bunched up, snow dusting their designer leather jackets and their pointy-toed cowboy boots. The middle one held a bloody white hanky to his nose. They were all lean, and about 5.5 feet tall.
“Sir, my friend, he’s hurt,” the lead one began. “Can we use your telephone?”

I shrugged my right shoulder toward a patch of light on the north side of the pool. “There’s a phone in the laundry room,” I told them. “It’s at the north end of the pool. The light’s on, and it’s open all night.”
“But we have no money,” the lead guy whined.

“I’ll give you some quarters.”

The lead guy then tried to ram the door open, but his cowboy boots couldn’t get any traction on the snowy sidewalk. Because I stood six feet and weighed 220 pounds, mostly muscle, he was no match for me. As the other two joined his ramming effort, I swung my .45 up to the lead guy’s chest level. His eyes widened and he gasped.

Then they all instantly realized that one hardball slug would end all their careers and they turned in unison, bolting for the courtyard gate, running like track stars and kicking up snow, and I heard an engine rev up, the slam of car doors, shouts, the whirr of tires on snow, then a chirp of rubber on asphalt.

That night I slept with my .45 in my Tanker holster.

A few days later, one of the local cops in a diner recognized me, and I joined him at the counter. “Y’know, that apartment complex where you live has a reputation for being a residence for high-rolling drug brokers,” he said.
“‘Brokers?’” I asked. “You mean ‘dealers’?”

“Naw…Brokers. They never touch anything. They just make the deals. But they have a lot of cash on hand. So when did you move in there?”

I had been having a tough day and decided to go for a walk, to further clear my head, before driving home.

Now, my wife and I frequently went for evening strolls in that part of town, but on the particular night in question, I chose to begin my walk in the opposite direction than we usually went, and to walk up a less familiar street.

Most of the houses that night had no outside lights on. So it was easy for me to see the large, calm-looking dog, sitting on the raised, lighted, side porch of a house, a few yards in front of me, and off to my left. I watched the animal closely for a few seconds, as I continued walking toward his house, and determined that he was probably no threat.

Yet even as I put my main focus elsewhere, I unconsciously put my hand inside my right jacket pocket, to re-adjust the huge can of bear spray that was hidden there. And thank God that I did, because it was at that very moment, just as I was coming abreast of the house, that I glimpsed a dark blur out of the corner of my eye, zipping toward me at ground level. I simultaneously glimpsed a flash of the now empty porch!
Instinctively I whirled to my left, facing the threat, the bear spray already out of my pocket, my thumb snapping off the safety and pressing the trigger.

I saw the blast of spray arcing toward the blur like a pale horizontal rainbow. I heard the long, reptilian hiss of the pressurized release, and felt the gentle push-back of the nozzle in my hand.

By the time the spray hit the blur, the blur was close enough to me that I could see it was. The very same dog that had previously been sitting so peacefully on the porch! And actually, I never really saw the spray, itself, contact the dog. What I did see was my line of spray, arcing from my right to my left, toward the dog’s face, at which point, the on-rushing animal instantly executed a sharp, ninety-degree pivot to his right, and continued running back in the direction from which he’d come, until he was all the way back up the steps, and sitting silently on his porch landing, with his mouth clamped shut, and a stupid look on his face.
I picked up the pace of my walking as I continued on past the house, hoping that would be the end of it. But a few seconds later, I heard what sounded like the porch door of that house opening.

Obviously somebody was coming out to see what had happened, and or to check on their dog. And since I knew how foolish some dog owners could act, when anyone dared to protect themselves from being mauled, by their bloodthirsty, illegally unsecured animals, I figured the more distance I could put between me and that house the better. I didn’t want any more trouble of any kind that night. So, just to be on the safe side, I took to glancing behind me every few paces, from that point on.

Thankfully, after another few minutes, I was almost at the end of that street. Just two blocks left to go. Then I could quickly get out of that whole crazy neighborhood! And that was when I saw it.
At first, it was just a dark spot of movement, quite a distance behind me, located roughly in the middle of the street. But each time I glanced back, it looked taller, more vertical, and more defined; untill finally I could see that it was a human being.

He was too far away for me to make out any features. But I could see that he was wearing a hooded sweater and had both his hands hidden inside his sweater’s pockets. And he was moving rapidly, with silent determination and intent. Like someone on a mission.

I started to get that danger feeling in my gut. The one that warns you when a threat situation is starting to escalate. Maybe he was coming for me, and maybe he wasn’t. Maybe I was just being paranoid. But I sure didn’t like the vibes I was getting off him. So I picked up my pace, determined to make the end of the street before he caught up.

The man had already halved the distance between us and was closing fast! There was no more doubt that he was headed straight for me, and that he was accelerating, and that I’d never make it out in time. I’d have to do something, and fast.

I certainly didn’t want to end up in the legal, moral, and ethical position of being involved in a violent encounter. But even less appealing than that, was the idea of ending up in the fatal position of being six feet under, after being hacked, carved and shot up by some thug, late at night, on the wrong side of town. So I wasn’t about to let that threat close on me.

And I wasn’t about to break into a run, either. I figured that at best, running, in a situation like that, would only trigger greater predatory action on the part of my would-be-assailant; and at worst, it would get me shot in the back. And I had no doubt that he was armed. Because on a dark street like that, in that part of town, at that time of night, no man in his right mind would dare charge up on another man, whom he didn’t even know and had never seen before, unless he felt he had some sort of serious back-up. Furthermore, I’d already demonstrated my willingness and ability to defend myself from animal attack, at the very least. Therefore, he couldn’t possibly be thinking of me as a “soft” target.

So as I hurried from the left to the right side of the street, crossing my pursuer’s trajectory, just a few yards in front of him, I reached inside my jacket and drew my pistol. Even under the stress of the moment I noted how natural and effortless it was to secure a correct one-handed combat grip on the gun.

I held the weapon muzzle-down, in my right hand, close to my thigh, keeping my extended right arm close to my body. I wanted to avoid needlessly flashing any possible onlookers, and possibly exacerbating the situation.

I glanced toward my pursuer and saw that he was still coming. I felt myself straining like sprinter, desperate to make it across the finish line ahead of my opponent.

And somehow, in those final moments, the impossible did happen. Somehow I managed to break out onto the cross street before my pursuer made it to the end of that last, fateful block. But I knew I wouldn’t feel truly safe again until I was totally clear of the area. So I slipped my gun just inside my waistband, at the front of my pants, and zipped up the lower part of my jacket to cover it. I wanted instant access to it if need be.

In the end, I made it safely back home that night. And I learned three valuable lessons from that evening’s adventures. One: Never walk alone at night in an unfamiliar place that looks and feels dangerous, if you can avoid it. Two: If you do happen to go out walking by yourself, be aware that you’re more likely than usual to look like a prime target to both man and beast. And Three: in most situations, if you stay alert and stay aware of your surroundings you’ll be able to keep enough distance between you and even an aggressive threat to allow you execute a full, effective retreat if things start to escalate. 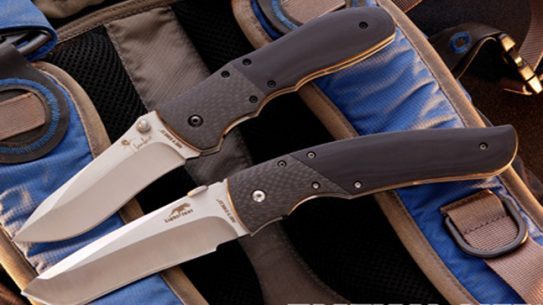 Meyerco’s Lightfoot & Lambert knives are perfectly comfortable at home, in the woods, or...