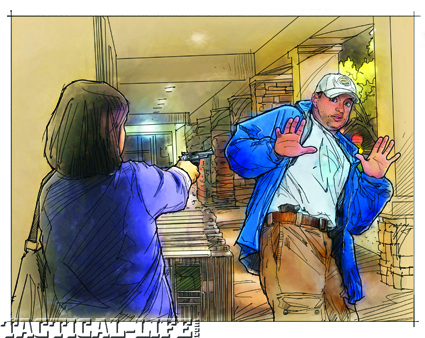 MAGNUM ADJUSTMENT
I am a chiropractor in a small southern town, in a practice with my husband and father. In the course of a day we see many patients from all walks of life, good and bad. My father, who has seemingly been around forever, always told me, “Don’t tell anyone your business.” It is not anyone’s business when you are home or out of town, the less people know about your personal life the better off you will be.

My husband and I are both avid hunters and licensed to carry concealed weapons. We hunt all over the world, my husband also works in Tanzania, so the patients are used to him being gone for weeks at a time.

Evidently the wrong person heard about my husband being away and decided to start stalking me. It took a few days to realize that someone was following me. No one ever believes that a complete stranger would suddenly target him or her but it was happening to me. Every time I got in my car the same truck would pull out and follow me from my office. Once I knew I was being followed my attitude changed from one of the hunted to the hunter. Maybe it was my experience hunting dangerous game in Africa, but instead of being frightened I was angry. Who was this person to think he would scare me? I had no idea what he was up to but it didn’t feel good.

Normally I carry an S&W Airweight .38 Special with Crimson Trace Lasergrips loaded with 158-grain +P hollowpoints in an inside the waistband holster. When I knew this person was following me I traded the .38 for a larger S&W M19 .357 Mag loaded with Glaser Safety slugs. I carried it in a strong side hip holster.

The days went on with my husband gone and sometimes I would see this truck following me and sometimes not. He would be gone for a day or two and then show up again. I had seen the truck enough to recognize his face. I spoke to several police officers, who were patients of mine and they said what we all knew. There was no law against driving behind someone and if the guy didn’t do anything there was nothing they could do about it. They did think that carrying the handgun was a good idea though. They couldn’t do anything until the stalker did something, but by then I was afraid it might be too late.

I continued to be vigilant. I don’t know if it was a coincidence or it was planned, but the night before my husband came home I ran into him. When I say ran into him, I mean just that. I walked out of the local supermarket turned the corner and bumped into him or I should say he bumped into me. I took a quick step back and drew the S&W. I pointed it as his chest from about three feet away and said, “You SOB! I don’t know what you want but you better stay away from me!” He raised his hands as he was backing up and I could see the butt of a revolver stuck in his waistband. He was talking a mile a minute as he backing up and putting as much distance between us as he could. After a couple of steps he turned and ran.

I called one of my police officer friends and reported the incident to him and he said what I did was fine under the circumstances and he didn’t think I would have any more trouble. I haven’t seen the truck or the stalker since.
—VN, TN

DEADLY FRIEND
I tried to imagine the worst thing that could possibly happen… Steve (name changed of course) would show up at my house, late at night, unannounced, and he would be high on meth. Unfortunately my nightmare came true, and when it did, I happened to be babysitting my three nieces.

Steve was a family friend and we had a cordial relationship. I knew he had a drug problem, but I never saw him high.

One night, my brother dropped his three daughters at my house and went out for the evening. Soon, we were all watching a movie and eating popcorn, just as happy as could be. Suddenly, there was a knock on the door, and I was shocked to see that it was Steve. He begged me to let him come in, and I did. I could see that he was extremely agitated. He told me a bizarre, elaborate story about how the FBI was after him and he needed a place to hide. To my horror, I realized he was high on meth.

I wanted to get Steve away from the children, and I was able to talk him into going outside. I tried to calm him down and get him to leave. He finally walked away and got in his car. I felt like I had dodged a train wreck.

I went back into the house and went to the bedroom. Suddenly, I heard shouting. I looked out of the bedroom just in time to see my wife go out the front door with Steve. She was out there alone with him!

I reached up in the closet, got my revolver, and stepped outside. Steve was yelling like an insane person and my wife was trying to convince him to leave. I told her to go inside call the police. “Steve, get out of here. Go.” Nobody knew I had a gun in my pocket.

My wife went in the house and left me alone with Steve. He looked at me with disgust in his eyes and said, “I’m going to kill you.” Then he ran dead at me. I had never before done a quick draw shot, but my many hours of effort at the range must have paid off, and I got lucky. I pulled my gun out of my pocket and fired one shot, center mass. Steve fell like a sack of wet concrete.

As you can imagine, I learned a lot of hard lessons that terrible night. However, if I could give just one piece of advice, it would be this: if you own a gun, you do not know where you will need to use it. Get a CCW whether you plan to carry or not, and be diligent in practicing your carry skills.
—GC, CO

MASKED BANDIT
I was headed back to my office one afternoon. I needed to pick up my laptop before heading out of town. About 50 yards from making a right turn into the parking lot I saw this brown SUV coming around the turn. He was moving at a high rate of speed and I could see a clear 5 inches of daylight under the driver’s side tires! I just knew that he was going to roll over…but he didn’t. He over corrected and came into my lane…I braced for the impact. The SUV came down the passenger side of my truck and shredded the entire passenger side.

After the impact I was in the process of getting out of my truck. I opened the door and placed my left foot on the ground, turning to look toward the vehicle that struck me, which was about 75 feet away. As I looked in that direction I noticed the driver, he had on a dark green zip-up jumpsuit, black boots and gloves, and a black ski mask with sunglasses.

“What the hell is this,” I thought. “Its either a bank robber or a terrorist,” I figured. Keeping my cool I reached in my console for the .40 caliber Glock that I carry. This did not look good for the home team and I was not going to go out with out a fight.

By this time we were fully out of our vehicles. The masked man looked toward me and shoved his right hand into his pocket and started toward me. I had my Glock in my right hand held down at my side. Holding my left hand up in a stop motion I shouted, “Stop, that’s far enough!” He kept coming. I repeated the command, “Halt,” it did no good. The third time I got in a two-handed firing stance, the one that I use at the range. The masked man was about 25 feet away by now, still had his hand in his pocket. I shouted, “Freeze! Your next step will be your last!” He stopped!

I was doing my best to remain calm, but here I was on a busy road, traffic stopped, pointing a gun at a masked man. I shouted, “Remove your hand from your pocket slowly.” He complied. If he would have pulled out a weapon at this point I was prepared to shoot. “Now with your left hand slowly take off that mask,” I commanded. His reply was, “No, I will not.”

About this time came the police. What a relief. I lowered my pistol and produced my driver’s license, insurance card and most importantly my permit to carry a pistol. The officers also asked the masked man to remove the mask, and again he refused. That was until they assured him that he could do this the easy way or the hard way, but either way he was going to remove the mask. He removed it.

The officers raked him over the coals trying to find something to book him on— there was nothing he was wanted for. As it turned out he was just a 28-year-old trying to play badass. One of the officers told the man, who at this time was without his mask, “You are damn lucky that this man didn’t shoot you!” That same officer told me that I did the right thing and was within my rights to protect myself.
—BB, internet 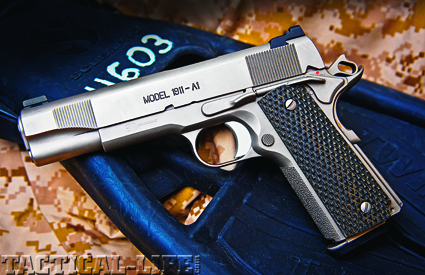 MAGNUM ADJUSTMENT I am a chiropractor in a small southern town, in a practice…