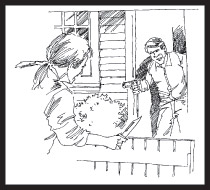 I was recovering from a triple bypass in mid-winter, staring out the front window at my next-door neighbor’s tenant. He was flat on the sidewalk with two of the city’s finest sitting on him. Seems he had an altercation with a cousin over a televised basketball game and thrown him out of a first floor bay window. I’d never had a cross word with him, but drugs and beer do funny things to folks.Couple of months later, back at work a couple of weeks, I was downstairs closing my tenant’s kitchen window at his request. I looked between the houses into the backyard and saw this same joker waving a huge knife at my wife and dog (a 125-pound male black lab). Samson was growling and my wife was trying to talk to the neighbor’s tenant, who was muttering something unintelligible. Something about turning my pooch into chop meat. (Colette didn’t tell me until a few years later that he had promised to cut the dog’s heart out).

It was plain to see you couldn’t talk to him so I sent my dog upstairs, took my wife by the shoulders and just guided her back up the stairs. He just stood there mumbling.

We’d been fairly good neighbors for two years, so I thought it worthwhile to see what was up with him. But first I put my Ruger P90 into my jacket pocket. I went back into the yard (three lots wide with no fence) and found him just outside the yard’s gate on his side, just staring.

I told him I’d have to talk to his landlord about his actions and flat out asked him if he’d been doing drugs. He replied, “Yeah, I been doing some ‑‑‑t,” with that he hopped over the gate, pulled the knife out of his pocket and came after me, running across the yard!

At the halfway mark, I drew the .45 out of my jacket pocket (thank god it didn’t snag), pointed it at his chest and told him to freeze. He stopped about 25 feet away, his eyes fixed on the muzzle, cursing me, but he did stop!

That gave me the opportunity to back up the stairs, still pointing my pistol at him. I went in and immediately called 911. Two police showed up at my door, a smallish gal and a very large muscular guy. We told them our story and the two of them went next door to talk to the neighbor. They knocked at the door.

The neighbor answered the door, saw the two police officers and immediately swung a roundhouse right at the lady cop. She ducked, and he missed. He then launched a kick at the male cop’s groin. He dodged the kick, caught him by the shoulder, spun him around and slapped the cuffs on him. No movie cop ever did it better. Damnest thing I ever saw! But the grief wasn’t over yet.

Two days later, I saw the druggie next door standing out by his car. His face looked like a pizza with lots of lumps. I asked my best friend, Rick, about that. Rick was a police officer and he just grinned. I asked him what was so funny about Mr. Pizza Face, and Rick told me they had given him an attitude adjustment.

Later, at the arraignment, the arresting officer told me that our boy had a six-page rap sheet and I should have pulled the trigger. The pizza face happened because he wouldn’t quit fighting.
I never heard from Pizza Face again. Was it something the police said, or was it staring at the business end of the Ruger?

I learned that showing your assailant early on that you are armed can save you bloodshed and perhaps a few .45 hollowpoints.
—TB, IL

I was recovering from a triple bypass in mid-winter, staring out the front window…