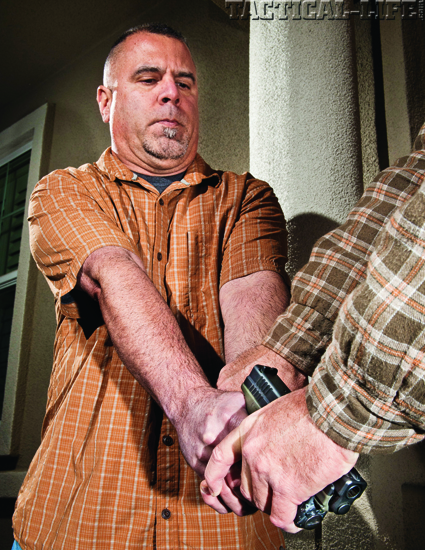 A struggle for the gun greatly increases the chances of an unintended discharge. Alfredo Rico Photo

“A good shoot is a good shoot,” or so the saying goes on the gun-oriented Internet. If they’d just change “is” to “should be,” I could agree with them. Unfortunately, I’ve seen too much courtroom reality over the decades to buy into such wishful thinking.

It’s a rule in the courtroom that there’s no such thing as a “justifiable accident.” Determination of fault for an “accident” can rise no higher than “excusable” in the best hopes of the defendant. If the judge in a bench trial or the jurors in a jury trial become convinced that you acted negligently, the result can go as high as a manslaughter conviction in a criminal court, or even a high-dollar judgment against you in a civil lawsuit. In the state where I live, a manslaughter conviction can bring a prison sentence as long as twenty years. For a judgment in a civil suit that goes against you, the sky is the limit.

“Hey,” argues the typical responsible gun owner, “I take a great deal of pride in my good, strong safety habits. I’ve worked hard, and paid a lot of money for good training to be as safe with a gun as a human being can be. Why should I have to worry about this?” Well, I can offer two good reasons.

One is that none of us is perfect. If your defense is that you are a perfect human being incapable of making a mistake, good luck with trying to convince twelve people with common sense that you’re the first such creature in 2,000-plus years.

When I was a young police officer in firearms instructor school in the early 1970s, an unintended discharge of a firearm was called an “AD,” for “accidental discharge.” Over the years I saw the terminology morph into “ND,” for “Negligent Discharge.” I couldn’t help but notice that this change in terminology seemed to emanate from schools that were sponsored by law enforcement firearms manufacturers, who at that time were being swamped by unmeritorious lawsuits falsely alleging unsafe guns, and were therefore understandably in defensive mode.

This newly popularized definition of “negligent discharge” was, “If an unintended shot was fired, and there was no broken part in the gun and no other mechanical malfunction of the firearm, it should automatically be considered a negligent discharge.” This did a very effective job of transferring potential liability from the manufacturer to the consumer holding the gun, which has merit. However, there can always be mitigating circumstances.

Were you ever involved in an automobile accident that wasn’t caused by a mechanical failure, such as a tire blowout or a broken tie rod or brakes that didn’t work properly? By the “ND” standard, you would be automatically considered at fault. Did another driver run his perfectly operating vehicle into your perfectly operating automobile, perhaps because he drove through a red light? By this standard, you’re still at fault: you were at the controls of the machine when the bad thing happened, and there was nothing mechanically wrong with your vehicle, so by the “negligent discharge” definition, you were automatically negligent and at fault.

Analogous case in point: Case Two. Several teenagers had stolen a van, and when cornered by police, ran from the vehicle on foot. One officer caught up with one of the fleeing auto theft suspects and grabbed him by the collar with his free hand, his other hand carefully holding his duty handgun away from the suspect, with his trigger finger on the frame. The suspect flailed wildly, one hand striking the cop’s pistol hard enough to twist it in his grasp, driving the trigger against the officer’s straight thumb. The pistol discharged, and the bullet struck the young offender in the head, killing him. A wise prosecutor’s office realized it was not the officer’s fault, and exonerated him from the criminal side, but plaintiff’s counsel filed a massive lawsuit against him and his department.

The cop couldn’t holster before making contact; anyone who says he should have never tried to put a pistol in a hip holster while running at full speed. Nor can anyone say it was negligent for the officer to have his gun drawn: stealing cars and fleeing from police during felony stops are both felonies in and of themselves. Cops chasing fleeing felons have reason to believe that their suspects are dangerous, and it is standard procedure to deal with them with service weapons drawn.

Case Two ended with a resolution favorable to the wrongly accused officer. It also taught me to hold my guns with thumbs in a position that weren’t in line with the trigger. The tragic death in that case came, in my opinion, from no negligence on the part of the officer. It was, simply, an accident. Had the young man in question not been committing felonies, running from lawful police apprehension and resisting arrest, he would not have died that day.

A Google search should bring you to the work of Dr. Roger Enoka, the physiologist who more than anyone else in his field has quantified how unintended discharges of firearms occur. One causative element is interlimb response, also known as sympathetic response. This means that, because our hands tend to work together, when one hand closes tightly the other hand reflexively closes along with it. In Case Three, a young rookie cop was arresting a man who had earlier disarmed and tried to kill a brother officer. The rookie held his revolver on the suspect with one hand, and attempted to handcuff him with the other. Suddenly, “his gun went off.” As the one hand closed its fingers to secure the handcuff, the other hand sympathetically tightened, and the index finger pulled the trigger. The bullet in the back of the surrendered suspect proved fatal. 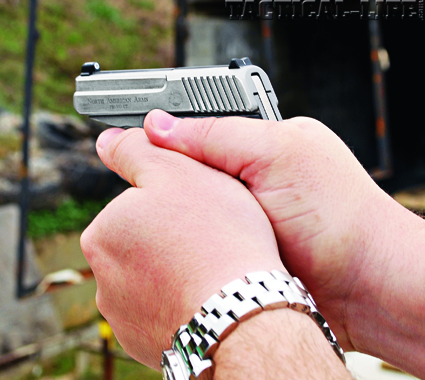 Even with firm double-action pulls as on this NAA Guardian, the finger should only be in the triggerguard when intentionally firing. Rob Garrett photo

The young cop was charged with manslaughter, on the theory that he had recklessly, negligently held a cocked gun on a man with his finger on the trigger while trying to handcuff him. By the “ND” standard—and, frankly, by my own standards, today—that would be negligent indeed, at least on the surface. Consider, however, that in such cases the standard yardstick of judgment is the doctrine of the reasonable man: what would a reasonable, prudent person have done, in the same situation, knowing what the defendant knew?

This case went down in the early 1990s. It was not yet the universal standard to keep one’s finger off the trigger when holding suspects at gunpoint. “What would a reasonable, prudent person have done?” Well, what they were trained and ordered to do. Once the suspect finally became compliant, the field training officer (FTO) stayed back holding his gun on the bad guy and ordered the rookie forward to do the handcuffing.

Realizing that the situation put him in his FTO’s line of fire and knowing that if the suspect attacked him his partner couldn’t safely shoot that suspect, the rookie kept his own gun pointed at the man. “In the exact same situation?” Well, this was a new cop in the most dangerous situation he had ever faced at work. He was, logically, very much afraid of this suspect who had already overpowered and disarmed the last, more experienced officer who had tried to handcuff him, so it’s understandable that he would keep his gun on the guy. “Knowing what the defendant knew?” Incredibly, this young officer had been taught to “cock his gun for a critical shot,” and had not been taught to keep his finger off the trigger if he was not in the act of firing the gun.

His attorney, the brilliant Bill Fette, brought all this out in court. The jury acquitted the officer on all criminal charges. I didn’t follow what happened in civil court, but wouldn’t be surprised if the department that trained him as they did got absolutely hammered there.

Another cause of unintended discharge, Dr. Enoka determined, was postural disturbance. When we lose our balance, our body convulsively grabs for something to keep us from falling…and if a convulsively “grabbing” hand happens to get a finger on the trigger, nature takes its course. In Case Four, an officer making entry on a raid slipped when coming through a door, and as his left hand grabbed for something to stop the fall, his right hand fired his double-action pistol, killing a non-resisting suspect with a bullet through the heart. The officer was exonerated on the criminal side, but the tragic unintended shooting cost his department big bucks in civil court.

One thing 33 years as an expert witness for the courts in weapons and shooting cases has taught me is this: it’s not enough to teach “Don’t put your finger on the trigger until you’re ready to shoot.” That doesn’t go far enough. In theory, you should be “ready to shoot” when you holster the gun in the first place! It’s not enough to teach “On target, on trigger; off target, off trigger.” That will get you through for safety on the range, but not on the street. On the street, when you take a suspect at gunpoint—a far more common situation for the cop, the security professional, or the law-abiding armed citizen than having to shoot that suspect—you are on target, and the finger will tend to come back onto the trigger!

What I’ve taught for decades is, “Don’t let your finger even be in the triggerguard unless and until you are in the very act of intentionally firing the weapon!”

It’s not a “good shoot” until it has been determined so in court. Don’t give those who want to hang you a hook on which to do so. Think like a potential defendant, not a shooter. Oh, and did we mention…keep your finger on the frame instead of the trigger unless and until you are in the very act of intentionally firing the weapon! 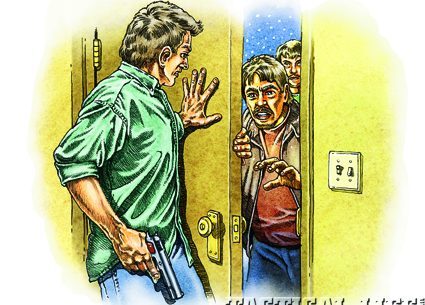 A struggle for the gun greatly increases the chances of an unintended discharge. Alfredo…