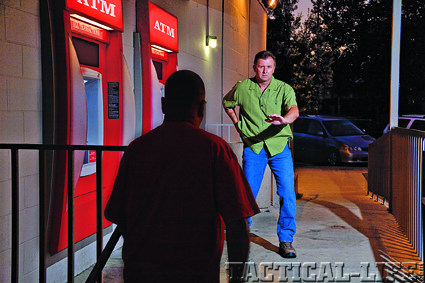 On the Internet, you find yourself inundated with advice, some from people talking about things they’ve never seen. We don’t do it that way here.

This particular corner of the magazine is devoted to managing the predictable aftermath if you ever do have to use your combat handgun for its intended purpose. The cases mentioned are real ones. The recommendations here come not from how someone thinks things should happen in the best of all worlds, nor how they might play out in Hollywood or some other fantasy land, but how things actually happen day in and day out in the real world.

With that in mind, hearken to the advice of Attorney Mitchell Lake, a Bridgeport, Connecticut lawyer who is on the referral list for the Armed Citizens Legal Defense Network (armedcitizensnetwork.org). He put the following advice together to post on firearms instructor James Yeager’s forum, getoffthex.com, and ran a copy by me beforehand. I thought he made some excellent points, and it is reprinted in part here with his permission, of coures.

Mitchell’s thrust is preparing one’s family and extended family beforehand for a crisis in which “one of our own” is forced to shoot a criminal in self-defense. He points out that there are numerous other medical or legal emergencies for which the same kind of advance planning will stand us in good stead.

Purpose of the Plan
The goal of this is to evaluate your family’s general post incident readiness in the 72 hours immediately after trouble strikes. (Assume that) you have received a phone call informing you that a loved one has just been involved in an incident:

You have minimal details (who was involved, the rough location), the police have been called, someone’s dead or seriously wounded, and your loved one is in custody at the moment. You have no other information about the incident.

Evaluate these statements as true or false in how they relate to you or your family.

-My family has a clear chain of command for post incident response. This is important because you do not want “wife” and the mother in law, who really can’t stand each other, arguing about what to do and how to do it while son is caught in limbo and nobody is able to make a decision as to what to do.)

-My family is willing to pool resources in order to help in this matter. An attorney costs this…a bondsman costs that…one person may have enough for most of the cost of one, but not the other…in addition to who decides which to go with, will they have the resources to go with that decision…

-My family has a clear understanding of who is going to take care of kids for the next 72 hours, call lawyers, and be available to run around to banks, lawyers, the jail, court and other places when needed by those running the show.

-My family has powers of attorney signed giving each other or a trusted third party access to financial and medical records, and authority to encumber property, make financial withdrawals, cash in life insurance policies and financial instruments, make medical decisions and other such important matters in the event I or another person are incarcerated (can’t cash in your 401k while in jail).

-My family have/has spoken to an attorney who is willing to respond off the clock; and I have either paid this attorney or have an understanding of how he wants to be paid for critical incident response.

-My family have/has the ability to raise approximately $5,000, or it’s equivalent in firearms, watches, stock certificates…anything of value, for an initial retainer to pay an attorney within 72 hours, or begin the process to free up such funds in a way that a lawyer can see he’s going to get money. (Average initial retainer post incident. Not too much that nobody is going to be able to get it in hand fast, but not too little that you won’t be able to at least attract an attorney’s attention. Unless money is in hand or it’s obvious that it actually is coming, don’t expect anyone to move all that fast.)

-My family have/has the ability to contact a bondsman who will have a reasonable rate.

-I know what negotiable paper my family has and how to turn it into cash quickly.

-Money makes the world go round.

If you answer true to all these statements you are a well-oiled machine.

If not, work on it. The last thing you want after (trouble strikes) is to run around wondering who’s got what paperwork, who can watch your kids as you run about confused, who is available for running to various offices, which lawyer to call (mom’s neighbor? The tax guy you met at the range?) and how you are going to pay for him, how to cash in negotiable paper… All while worrying about someone in interrogation room B. While this focuses mostly on a self-defense use of force incident, it is also applicable for most common occurrences of workplace injuries, car accidents, or other things of that nature.

Real Life Cases
Mitchell Lake’s advice above is solid. It’s the sort of thing people tend not to think about beforehand. He mentions having a “chain of command” established as to who gets to make the final decision when they have to help a family member in trouble. I remember Case One, in which the defendant had to shoot in self-defense when he was attacked in the street. When he was arrested, the family dithered so long arguing about which lawyer to pick and who would pick him, that by the time a legal team finally was in place, they didn’t have as much preparation time as they should have. The outcome was not the best.

In Case Two, the defendant was a college student attacked in the street and forced to kill in self-defense. His mother was an attorney, but one with a specialty far from what her son needed. Initially hiring a top defense lawyer who put together a superb case, she waffled based on advice from other lawyer friends, and changed horses in mid-stream. She fired the first lawyer and went with a different attorney whom she apparently liked better, but who handled the case all wrong. Her son was convicted of manslaughter.

Attorney Lake’s advice to pick an attorney beforehand is really important. Now is when you have plenty of time to check references, and make sure the attorney you’ll reach out for in an emergency is one who has done this sort of case before, has a good track record, and knows how to handle a self-defense shooting. There won’t be time to do that in the truly desperate hours after you may have been forced to kill another human being in self-defense, and may be going through the wrenching identity crisis of being treated like a murderer.

The defendant in Case Three was a police officer going through a divorce. He was having a heated discussion with his estranged wife at the marital home when his brother-in-law, standing behind the wife and to the side, suddenly raised a .38 caliber revolver toward him. Reflexively, the cop drew his Ruger .45 ACP and fired. His gunfire wounded and neutralized the brother-in-law… and struck and killed his wife as, not seeing the brother-in-law’s gun behind her, she stepped between them as the officer was shooting.

Horrified, the cop left the scene in a daze. Driving aimlessly, he called a defense lawyer he knew on his cell phone. The lawyer told him to hide the gun, turn himself in, and say nothing until the lawyer got there. The officer numbly followed his advice. When this attorney finally visited his now-jailed client a long time later, he counseled him to say nothing about hiding the gun and promised that he would tell the police where it was. It was a promise he did not keep. The prosecution made it look as if he had hidden the evidence out of guilt for an intentional act of Murder, and the jury never did learn that he had hidden the gun on advice of counsel. He was convicted of Murder. An appellate court later overturned the conviction, due largely to the egregiously unethical behavior of the attorney, but by that point, the cop had already spent years behind bars. There had been ample evidence to show that the cop was telling the truth, and a good lawyer would have gotten that evidence in front of the prosecutor so fast that this tragic, unintentional fatality—precipitated unpredictably by a third party—would probably never even have brought the involved officer to trial.

Money Issues
Attorney Lake steered you correctly there, too. If anything, initial costs could be more than the minimum he suggested. Be thinking about organizing defense funds if someone in your circle gets embroiled in this sort of expensive situation. In Case Four, a police officer in the Midwest was wrongfully accused of Aggravated Assault after a self-defense shooting. The officer’s dad was instrumental in organizing friends and family to create a fund he called “Back the Badge” to help his son fight the criminal charges. Case Four ended in an acquittal…I was proud to have testified on the officer’s behalf as an expert witness…and I still cherish a “Back the Badge” shield carved out of wood by the officer’s dad. It’s a constant reminder that Mitchell Lake is right: support of family and friends can be critical to helping you get through it if you are wrongfully accused after you were forced to shoot someone to protect yourself or others.

Don’t be a victim.