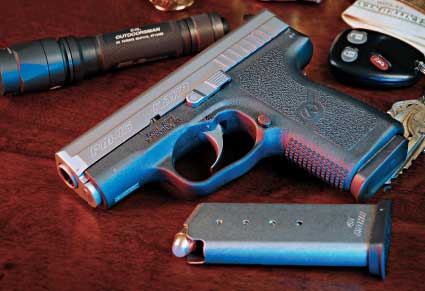 The move for individual states to issue concealed carry permits to qualified citizens has led to an unforeseen development in the firearms industry. More and more companies are offering smaller and lighter guns designed to provide the user with an easily concealable and comfortable-to-carry handgun. 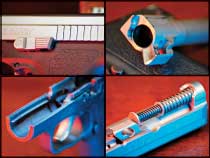 Remember, it was only a decade ago when many considered the Colt Detective Special or a customized 1911 to be the ultimate concealed carry gun. None of us would have dreamed then that 10 years later we would be packing a polymer .45 with a loaded weight of just 23 ounces.

That’s exactly what the brand-new Kahr PM45 weighs loaded with 6 rounds of CorBon 165-grain Pow’RBall bullets. Weighing less than 1.5 pounds and measuring slightly more than an inch thick, the PM45 packs 5 + 1 hard-hitting .45ACP rounds. Kahr has rewritten the standards by which we judge concealed-carry pistols!