0
SHARES
48
VIEWS
Share on FacebookShare on Twitter
The Kahr PM9 in 9mm offers concealed carry enthusiasts a potent pocket pistol. It is shown with extended seven-round magazine, and a flush-fitting six rounder is also included.

Kahr has made a name for itself with its line of striker-fired, slab-sided pistols. Ranging from all-steel to lightweight polymer-frame models, full-size to subcompacts, the line has something for just about any shooter.

One of the newest offerings is a lightweight compact 9mm pistol dubbed the PM9193N. It is a new variation of Kahr’s successful polymer pistol line, and sure to be a resounding success. The PM9193N is a compact, single-strike, DAO (double-action only) recoil-operated pistol chambered for the 9mm cartridge. Differing from other PM9 models, this Kahr has tritium insert night sights. The PM9193N also has a loaded chamber indicator and an external safety on the left side of the frame. 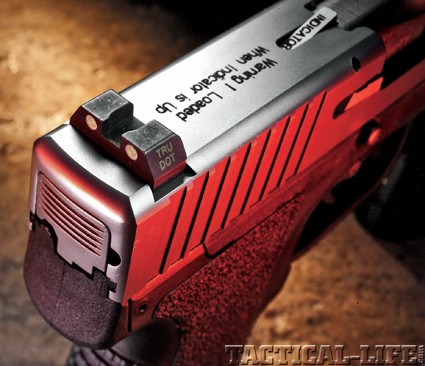 Gun Details
The Kahr action is a Browning locked-breech design featuring a striker-operated firing system with a passive firing pin safety, making it a true hammerless action. The striker is automatically held under partial tension after each round and is entirely secured by a passive striker block until the trigger is fully depressed. When the trigger is pulled, the trigger transfer bar begins to rotate a double-lobed cocking cam. This cam simultaneously begins to draw the striker to the rear, compressing the spring behind it while depressing and deactivating the firing pin block. At the end of the trigger’s travel, the lobe contacting the striker slips off the striker and releases it; the other lobe has, by this point, completely depressed the firing pin block and permitted the striker to snap forward and strike the primer. It is similar in principle to the action design of Glocks, though very different in execution. It also allows the firing pin block to be located further to the rear of the slide and therefore further from possible contamination by combustion gases and powder fouling. This system is employed on all Kahr pistols, regardless of frame material, size, or caliber. 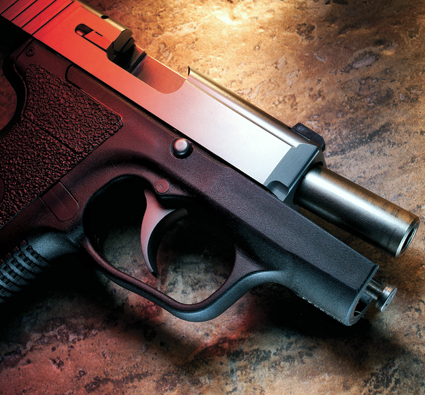 The PM9 is designed to lock open on an empty magazine. Note the tilting barrel design of the recoil-operated pistol.