0
SHARES
260
VIEWS
Share on FacebookShare on Twitter
At 13.6 ounces unloaded, the new Kel-Tec PMR-30 is a light weight dream pistol. Along with two loaded 30-round mags, this .22 Mag is ready for a long stay in the backcountry.

While lever, bolt, pump, and single-shot rifles, even revolvers, have been chambered for the .22 Mag rimfire round for many years, semi-autos were a little slower coming. For a short time AMT and Grendel both offered pistols for the round, but neither is still in production. Given I’m a longtime fan of the .22 Mag in both rifles and handguns, Kel-Tec’s introduction of the PMR-30 (Pistol, Magnum Rimfire, 30-round) in 2010 was exciting news. Actually getting my hands on a pistol took a little longer, and it was almost a year later when I finally had a chance to try the new handgun out. 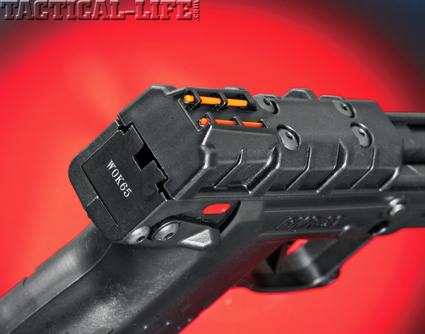 The PMR-30 offers outstanding fiber optic front and rear sights. The front sight can be drifted for windage, while the rear sight is fixed.

Gun Details
For the first couple of decades after its introduction, Winchester ammunition, in either a jacketed hollow point or a full metal jacket round, was about the only option a .22 Mag shooter had. While the choices in .22 Mag ammunition have dramatically increased, it often seemed like those trying to design a semi-auto often stayed focused on the original Winchester loading. In fact, it was very common to find a note in the box of any new semi-auto .22 Mag pistol stating “Winchester ammo only.” 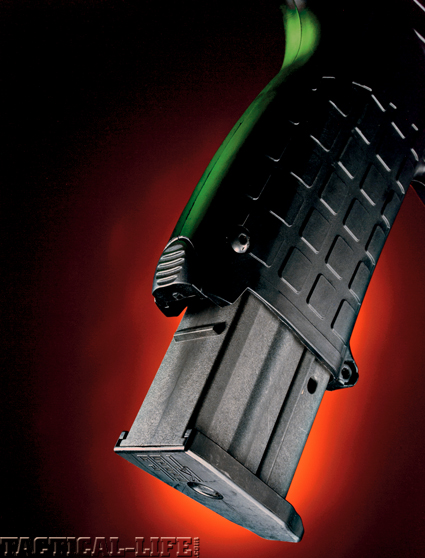 The detachable mag packs 30 rounds of .22 Mag within the comfortable grip frame.

So I considered it good news when I heard Kel-Tec’s “hybrid floating chamber” was specially designed to function with a wider range of loadings. On the other hand, I didn’t exactly know what a hybrid floating chamber was, so I asked Kel-Tec. Their explanation was as follows: “The barrel is allowed to float forward and backwards a small amount in the frame. There is no mechanical locking system in the gun itself. The locking mechanism actually comes from the cartridge case locking to the barrel during firing. If the pressure in the cartridge is high enough, the friction will cause the case to stick to the chamber of the barrel, and the barrel will recoil with the slide until the pressure drops, just like in a locked breech firearm. If the pressure is low, then the barrel stays still (or barely moves), and the slide recoils just like in a blowback firearm. This hybrid system allows for the use of a large range of various power ammunition, and does not require chamber friction reducing methods like a fluted or ported chamber seen on other .22 Mag autoloaders.”