“Crash!” The sound of an overturned shopping cart reverberates through the store. I look up and see his anger. “Honey, grab the kids!” I say to my wife as I hand her our two-year-old daughter. “What?” my wife says with a confused look on her face. “Sharon…” I look my wife square in the eyes…“Cover!” My wife instantly separates herself from me as I go after him.

He is a foul mass of sweaty, greasy hair, and graying beard, who is busy flipping over shopping carts and throwing merchandise at the customer service desk. “I’m gonna kill somebody if I don’t get what I want” he screams. I’m in civilian clothing with my Glock 21 concealed under a loose fitting shirt, my shield positioned just in front of the holster. “Sir, you’d better sit down now!” I say tersely at him. He wheels his six-foot frame in my direction and reaches for the right flank pocket of his tattered, bush jacket. I instantly close the reactionary gap that I’ve kept between us and go hands-on.

I wish that I could tell you “My training kicked in and I quickly subdued the assailant.” Horse pucky! The fact is that he caught me off guard by partially side stepping my advance, this guy knew a thing or two about defensive tactics. We locked arms and began grappling at one another.

I looked into his red rimmed eyes and he said “Come on, man, I just wanna’ get some help.” He was losing his balance as I pushed my considerable strength and height of 6’4” at him while pulling him off line to the right, away from my gun side. For some inexplicable reason I said something to him which miraculously worked “You’d better stop fightin’ I’m a cop!” He instantly unhanded me and stepped back. “If you’re a cop show me your badge!” I slowly exposed only the bottom portion of my shield. That satisfied him. I pointed to the bench to the right of the service counter, and said “Sit!” and sit he did.

Cover & Concealment
Let’s rewind for a moment. What did I do right and what did I do wrong. I used the word “Cover” with my wife, which was good. A long time ago I taught my wife the difference between concealment and cover. Concealment is something that hides you from the enemy. Cover does the same thing but with the added benefit of stopping bullets. My wife knows that if ever I say the word “Cover” to her she has but one job to complete. She is to grab our kids and separate herself from me.

The first thing that you need to do when you make yourself a “bullet magnet” is separate yourself from those you love. Now lest you think this is a Cop thing, nope. I set these protocols in motion long before I ever entered law enforcement. It only makes sense to have a plan set in place for the inevitable.

Confrontation
When in a confrontation with a potentially armed assailant, the last thing you want to do is overreact and pull your gun, thus escalating things instantly. By the same token, when the subject is brandishing a weapon, you’d better be ready to deal with the problem. The safe zone you want to keep when a subject has a weapon other than a firearm is 21 feet. If they have a club or a blade, they can get to you faster than you can clear leather from 21 feet out. In such an instance you need to have your gun in hand at the low ready.

The point is, don’t screw around when you have to pull a gun on someone. When you pull your gun, it means that a life could end, be sure it’s not yours. You must be mentally ready to take a life if you find yourself clearing leather on someone.

Reactionary Gap
Distance is your last line of defense. By keeping far enough away from the subject to see the whole picture but close enough for you to get inside the attack you will be in a better position to survive a confrontation. In the supermarket case I admit that I was wrong to go hands on like I did. Thank God that I wasn’t dead wrong. This guy could have been trained in the martial arts and could have killed me with one throat strike. Even though he didn’t go all ballistic on me, he side stepped my advance ever so slightly. He knew what he was doing.

What you want to do in this situation is use your words to challenge the subject, this buys you time for the cavalry to arrive. Keeping something between you and the subject is always a great idea. In this case I could have grabbed a couple of those shopping carts that you see to the left of the service desk filled with returns. What a perfect barrier to use, you can shove them at the subject if they go for a weapon or you can simply push back from them if they advance on you with a weapon other than a handgun. I know I keep saying “other than a handgun” I’ll get to that here shortly.

While standing behind your barrier keep your hands in a neutral position at chest level, this allows you to deflect a quick advance with a side step, a shove, and go to guns. The other big “no-no” I did was to allow this man to lure me into his space with his violence. This works whether you’re talking IEDs or errant bums at the supermarket. I stepped into his space and could have paid with my life.

Coincidentally he was enraged because the supermarket refused to cash his disability check without proper ID. They were doing the right thing, but unfortunately he didn’t see it their way. He was shredding the customer service area and making a fool of himself. I never should have gone hands-on. He hadn’t displayed a weapon of any kind and was (I realized in retrospect) making sure to not actually hit anybody. He may have been slightly crazy, but he wasn’t stupid. Long story short, he went to jail and I went home with a bruised ego. A small price to pay for a real world lesson in confrontational tactics.

Shoot-N-Scoot
Long before I was a cop I was a card carrying, gun toting American. I used to shoot IPSC matches, which were more geared toward concealed carry and CQB threat engagement. One of the skills that you’re taught is shooting from cover and shooting on the move, aka “Shoot-N-Scoot”. One of the simplest things you can do to end an armed encounter (here’s where that “other than a handgun” problem gets addressed) is to take cover behind the engine block of a vehicle and skip rounds off the pavement at the subject, when he goes down…finish the job. I practiced this as a civilian and imagine my surprise when it was taught to me in Police Academy. There’s no need to wade into the fight like Robocop, be smart, use cover to your advantage. Remember the cemetery is full of brave men.

Years ago I saw footage of a bank robbery where the robbers stormed the bank and before they could finish their “Hit the deck” speech an armed civilian cleared leather and dropped all three bad guys in a hale of flying brass. It was clear that our “hero” had been well trained in pistol craft. The fact is that as a legally armed citizen you are my greatest ally as an officer. 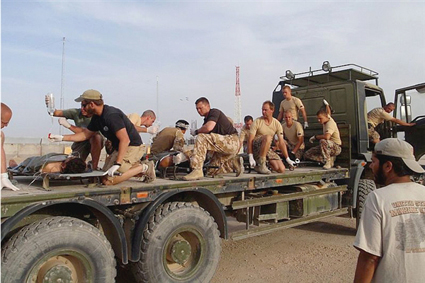 “Crash!” The sound of an overturned shopping cart reverberates through the store. I look…