Over the years I have had the opportunity to evaluate many different Kimber pistols. Most of the guns impressed me enough that I bought them and the very few that were returned to the factory was because I didn’t have the money to purchase them. Each of them impressed me in their own way, whether it was the way it handled or the level of accuracy it possessed or specific features that made them perfect for my perceived needs. If you asked me to pick a favorite I would be very hard pressed to pick just one. That is until I received the Kimber Gold Combat Stainless II pistol: a gun built completely in Kimber’s Custom Shop that possesses a load of custom features. Not only does it have the accuracy and reliability that I demand from a custom pistol, it also possesses the refined aesthetics of a hand-built masterpiece.

It turns out that I am not alone in my praise of the Gold Combat. Kimber’s Custom Shop Manager, Dennis Madonia, told me, “Of all the guns that Kimber makes, if price were no object, this is the pistol that I would buy for myself.”

Speaking to another Kimber official, he told me that, “It is absolutely the best production 1911 made today…probably ever! I really believe that. Of all my guns, and I have tons, that is my absolute favorite.”

Kimber has had a Gold Combat in their line-up for quite awhile, but two years ago they decided to upgrade the pistol. According to Kimber’s spokesperson, “The model itself was held in such high regard that we didn’t want to lose the name…we had a strong following and didn’t want to re-name it. It is the only time that we have taken an existing model and modified it to this degree. It is in my opinion the very best Kimber pistol.” While Kimber’s employees may be just a tad prejudiced, I am not. After having a chance to carry and shoot the Gold Combat Stainless II for a few weeks now I have to agree with both of them. This is without a doubt the finest Kimber I have had the chance to evaluate.

Gun Details
Kimber’s Winslow Potter, who oversees new product development, and the Custom Shop manager, Dennis Madonia came up with the modifications on the new Gold Combat Stainless II. As I mentioned, the pistol is built completely in Kimber’s Custom Shop where it can receive all of the individual attention that befits a gun in this class. During a recent phone interview, Madonia went over some of the Gold Combat’s features. Madonia’s background is similar to mine in that he spent a lot of years shooting USPSA competition and competitive shooters favor many of the features included on this pistol. “That gun can do double duty—you can go shoot a USPSA match using it in the Limited 10 division and then use it as a carry gun on the way home,” said Madonia. 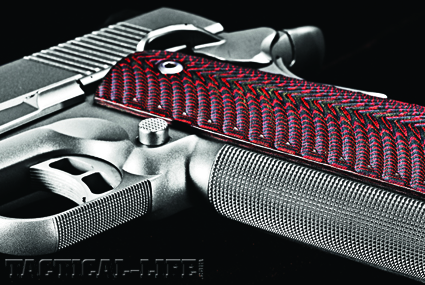 He continued, “A lot of those things on that gun are things that I personally like. I don’t like 30-lpi (lines per inch) checkering because it feels like there’s nothing on the frontstrap and 20-lpi is too coarse for someone that shoots a lot of rounds, so we settled on 25-lpi.” To me, the checkering feels just right. It is coarse enough to give the shooter traction but not so rough that it will tear up the shooter’s hand. Kimber pistolsmiths also checker the bottom of the triggerguard.

The triggerguard is undercut where it meets the frame for an extreme high hold grip. According to Madonia, “It’s such a subtle thing that most people don’t see it when they look at the gun. You have to put it in your hand to appreciate it. The gun sits lower in your hand and there’s less muzzle rise because of it.” This is a feature that I always include on any 1911 custom gun that I commission because this seemingly small detail makes a huge difference in the way the gun feels in my hand. Kimber also bevels the bottom of the slide flat. It is a cosmetically pleasing touch that will also keep the slide from carving expensive holsters or flesh.

Some other performance enhancing features of the Gold Combat Stainless II are the Micarta grips that offer shooters a secure firing grip, ambidextrous thumb safeties that competition shooters will need and a detachable stainless magazine well funnel to aid shooters in speed reloads.

Madonia said, “We also went with different style of cocking serrations; they’re deeper and thinner and I think they look a little classier. We flat topped and serrated the slide—it is one of our most popular modifications. The bull barrel is a popular choice for many. We stepped the barrels so that it would lock up tight when in battery but also unlock smoothly as the gun cycles. The one drawback is that it can’t be used in IDPA competition.” (Though I noted the slide is cut for a barrel bushing lock tab so that it could be retro fit with a standard barrel and bushing if shooting IDPA competition is important to you.) “The reverse plug system is Kimber’s design and manufacture. The gun always had fixed sights but we changed them to the tactical type that you can cock against the table or doorframe. That seems to be the latest rage.” 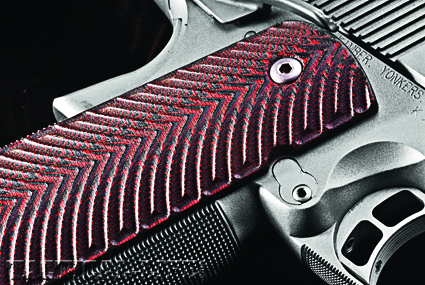 For defense work the sights are fitted with tritium lamps in the familiar 3-dot pattern. They glow green in dim light and are dovetailed into to the slide. The rear sight is drift adjustable for windage. The sights are big enough that I had no problem getting a crisp, clear sight picture when shooting groups at 25-yards.

BlackHawk CQC Holster
To carry the Gold Combat I ordered a BlackHawk CQC standard polymer holster. This is my first experience with a BlackHawk holster and found it to be very innovative, versatile and effective. There’s an adjustment screw just under the triggerguard that provides adjustable retention. The front of the holster is low cut so that the pistol’s muzzle won’t drag on the holster as it is being presented. The really innovative part of the holster is its back plate that allows the holster to be adjusted for angle of rake. While I prefer to wear my pistol pretty much at 90 degrees, it can be adjusted for the familiar FBI cant, or even worn on the weak hand side while driving. Even its belt loops are adjustable for different belt widths.

If you prefer the easy-on and -off convenience of a paddle holster than you are in luck because BlackHawk includes a paddle back plate that offers the same adjustable rake feature. It features a wide paddle that is very comfortable, locks the pistol securely in position and distributes the weight of the pistol over a larger area. Even full-size, steel-frame 1911s are comfortable to wear for extended periods with the BlackHawk CQC holster. In use, CQC standard provides a stable platform for presentations. It is comfortable to wear and provides plenty of security when properly adjusted and it is immensely affordable.

Shooting Impression
Aiding me in shooting those small groups was the excellent Kimber trigger. My test sample’s trigger pull broke at a crisp 4.25 pounds. The lightweight trigger has been properly adjusted for overtravel. The loads I selected for evaluation varied greatly in bullet nose profile, overall length and bullet weight. I was curious to see if the Gold Combat II would show a preference for any particular type of bullet. All bullet weights and types fired equally well without any problems. Even the hot defense loads cycled fine and recoil was quite controllable in the steel-framed, full-size pistol. Hornady’s 230-grain full metal jacket rounds turned in the best group of all rounds tested. The Kimber Gold Combat was not the first 1911 that I’ve tested that found this round to be exceptionally accurate. 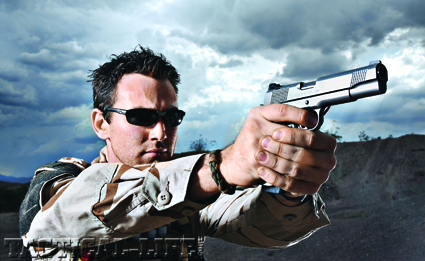 I took some steel targets out to the desert and practiced with the Kimber. It handles as well as it looks and I had no problems double tapping with the Gold Combat II. The undercut frame helped me get back on target faster and the magazine well funnel was especially appreciated when I did speed reload exercises. I fired a couple hundred rounds during that outing and the 25-lpi checkering didn’t even raise a welt let alone blister. To date I have about 1500 rounds through the Gold Match, about half were hot defense loads and the other half my own lead round nose reloads that I use when I shoot a USPSA match. I have yet to have any sort of failure.

Final Notes
When I pick up the Gold Combat II I am reminded of the old adage; Beware of the man who owns just one gun, he probably knows how to shoot it. If I had to pick just one Kimber to spend the rest of my life with it would have to be the Gold Combat II. It is a good-looking pistol that does everything I need it to. I can shoot a match with it or use it as a carry gun. There isn’t anything I need to change or switch out for either use. It possesses the accuracy and reliability needed for any of my needs but also possesses a number of refinements to classify it as a truly custom gun.

Kimber also offers the Gold Combat made from carbon steel with the KimPro finish for those that prefer a black gun. Additionally, the weapon is also produced with a tactical rail dust cover. For more information on the Gold Combat and the rest of Kimber’s line, check out their website.