Combining a laser with a pistol has some distinct advantages. It becomes valuable in low light where sights would be difficult if not impossible to see. Focus is on the threat. The laser also allows aiming from odd positions, such as lying on one’s side or from around cover. If you can see the dot, you do not have to align your eyes and expose your head behind the gun. 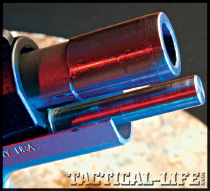 Kimber has teamed up with Crimson Trace on a number of guns—one of the latest is their line of Crimson Carry pistols. While the idea of equipping a handgun with a laser is not a new concept, the beauty of the Crimson Trace system is that the 5-milliwatt laser is incorporated into the grips. This means there are no extra appendages, the weapon is not bigger or heavier, and can even be carried in any standard 1911 holster. This keeps your pistol sleek and trim, just as it should be.

Gun Details
The Pro Crimson Carry II shipped in a polymer hard-shell, lockable and padded carrying case with a 7-round magazine. Also included were a gunlock, two Allen head wrenches for adjustment of the laser, two cleaning pads for laser lens maintenance and a takedown tool for capturing the recoil spring assembly.