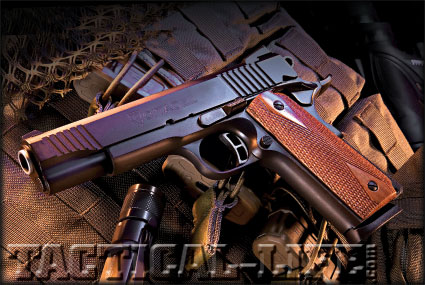 Overall value should always be a consideration when purchasing a firearm. While the market today offers many high-end pistols with value-added features, the smart shopper has to assess just how much value he gets from those features, and how much he is willing to pay for them.

Joining an already crowded field of M1911 semi-automatic pistols is the Citadel, manufactured in the Philippines by Armscor Precision International and imported by Legacy Sports. The Citadel is a no-nonsense, multi-purpose .45ACP handgun incorporating proven and accepted M1911 refinements while eschewing some unessential niceties found on costlier pistols.

The Citadel, like most of today’s M1911s (except a few retro mil-spec models), would have been considered “factory custom” just a few years ago. The pistol has a high-sweep beavertail grip safety with raised pad, a speed hammer and speed trigger, extended ambidextrous thumb safeties, a lowered and flared ejection port, lightly beveled magazine well flat mainspring housing, double-diamond wood grips, and snag-free sights. It is also reasonably well dehorned, with nary a sharp edge to catch clothing or gouge your hands. That is a lot of features for not a lot of money.

The Citadel also includes some not-so-common niceties like checkering on the flat mainspring housing as well as on the magazine release button and slide release lever, and front cocking serrations.

In assessing the utility of features on the Citadel, personal preference plays a huge role. Among the included features it must be said that many non-southpaws dislike ambidextrous safeties as they fear they may bump against something and deactivate the safety without realizing it. Also, while front cocking serrations look good, they may promote poor handling technique. You really shouldn’t place your hand near the muzzle, even to check the gun. The other included features of the pistol all do seem to enhance the gun’s handling and user-friendliness. We particularly liked the trigger and hammer, both of which were smoothly contoured, lightweight and handsome.

What the Citadel lacks are a few refinements currently coming into vogue, like a serrated topstrap and rear of slide to break up possible glare (though its matte parkerized finish really doesn’t reflect much, truth be told), a checkered frontstrap and tritium night sights.

Among absent features, we can really live without the serrations to the topstrap and rear of the slide. However, as most self-defense shootings occur at low light, tritium night sights are a good idea. Then again, the sights are a part that is easily swapped out and purchasing aftermarket sights allows the Citadel buyer to get exactly what he wants.

Checkering of the frontstrap is really a toss-up. While checkering the frontstrap is generally assumed to be significantly beneficial, the matte parkerized finish of the gun and the checkering on the mainspring housing prevented the Citadel from feeling slippery in the hand. It really didn’t torque out of our grip, and our fingers didn’t resemble pin cushions after a day at the range.

The only significant quibble we had about the Citadel’s appearance was the finish, though. The parkerizing doesn’t appear to wear well, as demonstrated after just a few presentations from the holster.

How It Handles
Forgetting about the details and just handling the gun tells you much of what you really need to know. The Citadel feels good in the hand. It sits low, balances well and the recoil impulse is broadly dispersed. It’s comfortable to shoot and the controls are easy to manipulate and function as intended.

There was a little take-up on the trigger, but not much. The trigger pull exhibited some mushiness relative to a top-end gun but quibbling over trigger pull on a defensive gun is like arguing over how many angels can tread on the head of a pin…pointless. A defensive pistol need only have a manageable trigger pull. No one in a gun fight ever remembers the quality of the trigger break. The Citadel’s trigger pull is better than expected and more than satisfactory for self-defense or even casual target shooting.

The sight picture was clean and precise with a post front and square-notch rear. The sight picture was not fast to acquire and there are better tactical set-ups out there, but the Citadel arrangement does lend itself to precision at the range. For that reason, we’d consider the Citadel for those looking for a casual target gun as well as a defensive pistol. The rear sight is adjustable in its dovetail for windage.

Disassembly of the Citadel was fast and simple. It uses a typical solid bushing and regular-length guide rod. All parts mate together nicely, meaning tolerances are tight enough for good accuracy yet allow for reliability and ease of disassembly/assembly.

Shooting Impressions
The accuracy assumptions were confirmed on the range where the sight picture helped the Citadel post very respectable figures for a tactical or general-purpose pistol.

In early testing there were three failures to go into battery, each with the last round in the magazine. The problem abated as the pistol broke in. The Citadel comes with two Italian-made 8-round magazines, cable lock, a test-fired cartridge case, manual and carrying case. 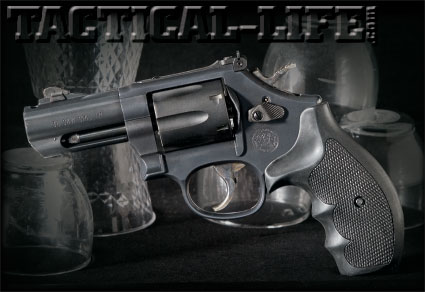