Lessons From the Stakeout Squad

2
SHARES
672
VIEWS
Share on FacebookShare on Twitter
Should you or shouldn’t you use the sights on your handgun for self-defense? The answer to this decades-old question has well-qualified adherents who subscribe to “yes,” while others who emphatically state the opposite. This said, there is a middle ground where the answer is “sometimes.” Lacking any scientific method or device with which to validate any of these answers, we are left to rely on those who have used their handguns for self-defense and what they recall of their methods. Obviously, we speak to the winners rather than losers. The problem is, they may well repeat what they were taught and what they think they did in their once-in-a-lifetime use of force.

An exception to this is to hear from some folks who have had multiple successful exposures, all in similar circumstances. I believe their recall just might be much more accurate and their conclusions well-worth considering. One such person is the late Jim Cirillo, who was a member of the New York City Police Department’s Stakeout Squad (SOU), where he was forced to kill at least 11 men in the course of more than 20 gunfights during the 40-man unit’s some 250-plus stakeouts.

Fortunately for us, the details of some of his gunfights, along with his observations on guns, cartridges and shooting methods are now recounted in Jim Cirillo’s Tales of the Stakeout Squad by Paul Kirchner, available for $25 from Paladin Press (800-392-2400; paladin-press.com).

SOU Background
NYPD’s SOU was formed in response to an out-of-control crime wave in the late 1960’s. Victims were mom-and-pop candy and grocery stores, motels, hotels and Western Union offices doing cash transfers. The SOU methodology was simple. Review those businesses that had been robbed multiple times, survey the location to see if there was a good position in the business in which to hide (or build one), check possible angles of fire so as not to endanger any innocents, assign two or three SOU officers armed with handguns, shotguns and rifles, and wait for a robbery to occur. Most times, they did not have to wait long and often had to shoot, because many robbers chose not to surrender. A few officers were wounded, but none were killed. The resisting armed robbers were not so lucky.

During the numerous conversations Jim and I had over the years, he told me he took part in about 20 encounters. The exact number of offenders killed or wounded is not known. Bill Allard, one of Jim’s regular partners, pointed out that, “We weren’t keeping a lot of records in those days of everything that was going on. Today you’d have to do that.” Another of his partners, Al Syage, followed up, saying “We didn’t keep score; we didn’t keep records; we didn’t even keep a number of the felons who were put on a slab in the morgue.” Jim is officially credited with having killed 11 robbers in such stakeouts, but he suggested to me that the number was higher.

Jim was armed with his issue Smith & Wesson M10 4-inch barrel .38 Special revolver, but he also used a matching gun as one of his back-ups, which included his personally owned Colt Cobra .38 Special 2-inch barrel and Walther PPK in .32 ACP. He was also armed with either of two types of 12-gauge shotguns – a short, double-barrel Savage or a short-barrel Ithaca Model 37—and the option to use an S&W Model 76 9mm submachine gun. It appears he didn’t care for this and did not use it, stating it only worked reliably when using round-nose full metal jacket 9mm ammunition.

Jim liked and used a PD-owned U.S. GI M1-Carbine… after the SOU unit gunsmith modified it to run with Winchester 110-grain jacketed hollow point ammunition. Bill Allard used his personally owned National Match Model 1911 in .45 ACP. All the guns mentioned were used in at least one shooting, except for the Walther PPK. 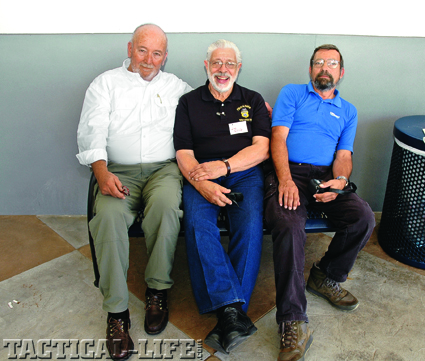 Lessons
Now, back to the original question: to use the sights or not for self-defense. Jim said he did use his sights whenever he could. In his first and most written-about shootout (the second of the SOU and his first gunfight), he and “George Ballinger” (a fictitious name at the officer’s request) set up at the Old McDonald’s Farm Store on 101st Avenue in the Jamaica section of Queens, New York. Jim fired six shots in 3 to 4 seconds against threats with exposed areas no more than 8 inches in diameter at distances of 20 to 25 yards.

Jim and his partner were hiding behind and slightly above the cashier counter when the three robbers entered. One confronted the cashier. As Jim rose to challenge him, the codpiece on Jim’s vest fell loudly to the floor, causing the robber to duck down behind the counter and run along its length. Jim shot him three times in the head and killed him. He then fired at the other two as they ran out. His partner also fired, using a shotgun. The two robbers were later arrested, suffering from handgun and 00-buckshot wounds. Jim said he was looking so hard at the front sight of his revolver he could see the serrations in it.

What was and is still ignored are instances where he or other officers were not able to do such sighting. In these later instances, they were confined in small spaces or had to fire through small shooting ports such that they could not sight their handguns. They still came out on top with the felons either dead or seriously wounded.

As far as obtaining a classic sight picture, Jim said: “In law enforcement, your problem isn’t at your front sight, it’s in the background.” He explained, “As a police officer, you’re obligated to make sure that the person you’re shooting is the one you should be shooting. You can’t let God sort them out.” Also, “…if you’re looking at your front sight you can’t see that some poor guy is pulling a black wallet out of his back pocket—you think he’s pulling out a gun.”

In other words, locate and identify threats and non-threats. In my conversations with him, Cirillo further clarified what he meant, saying he knew where the sights were while he looked at the “background,” He also said his shootings were done at the subconscious level and reflected how he trained.

So, has the question been answered? Yes. If you have the time, favorable lighting and the need for a precise shot at some distance, take the best sight picture you can get. Conversely, if you are up close and under attack, use only as much (if any) sighting needed to make the same well-placed shot, keeping in mind Jim also found that only accurate shots, regardless of caliber, can stop a life or death fight.