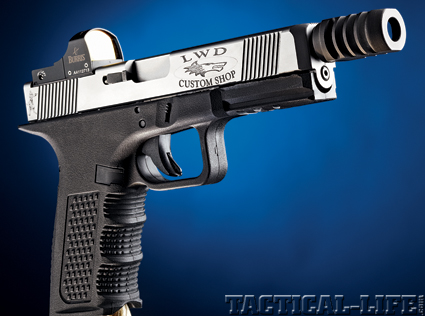 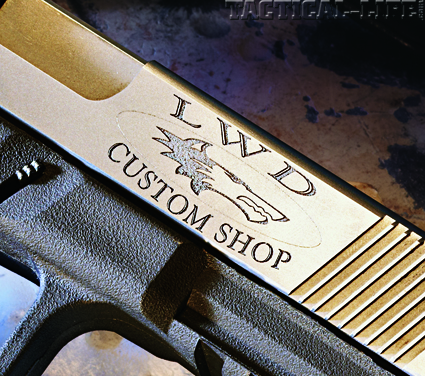 I blame a fictional character named Napoleon Solo for my interest in firearms. A television show debuted where a heroic secret agent is shot at by a villain, only to discover he is standing behind bulletproof glass. The agent then runs around the glass and shoots the villain with a Luger 9mm. As the series “The Man From U.N.C.L.E.” progressed, the Luger was replaced with a custom Walther P-38 with a short barrel and a flash hider attached. Additionally, the pistol could be converted to a rifle with a slide on tubular stock, longer barrel with “silencer” and optical sight. I actually saw Solo shoot down helicopters with it.

Due to the compensator and barrel porting, the Werewolf .40 easily stayed on target to allow for rapid, well-placed follow-up shots. The Burris FastFire II Red Dot Reflex Sight simplifies the act of aiming by eliminating the need to focus on the front sight, rear sight and target.

I was 9 years old and quite impressionable, but the gun was very appealing to the eye, which I am sure this is what the producers were after. Why am I telling you this? Because this is the gun I thought of when the Lone Wolf Werewolf arrived—I opened the box, looked at the pistol and thought, “wow, that looks like the ‘Man From U.N.C.L.E.’ gun.” 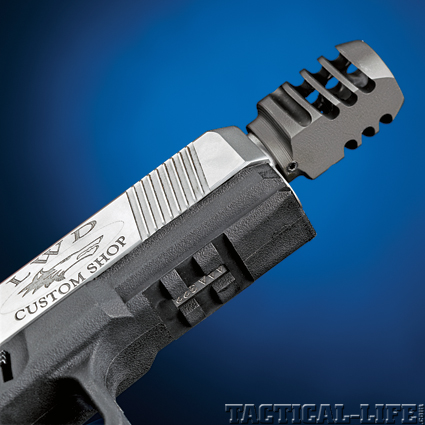 The Werewolf’s frame features a modified rail system and a custom compensator that minimizes perceived recoil by up to 75%.

Gun Details
But seriously, the new Lone Wolf Werewolf is a hybrid made from proprietary Lone Wolf components and factory Glock parts. A product of the Lone Wolf Custom Shop, the .40 S&W chambered pistol is intended for competition but could potentially be right at home in urban combat. The Werewolf is comprised of the new Timberwolf replacement frame, a stainless steel barrel, a stainless slide with custom laser engraving, slide/barrel porting and a custom compensator—all from Lone Wolf. The slide is custom-cut to accept a Burris Fast Fire II mini-red dot sight. Due mostly to the work of Crucible founder Kelly McCann, this sight arrangement is currently moving away from the competition arena over to combat pistols. McCann has spearheaded a movement within the special operations and law enforcement communities to use mini-red dot sights on pistols, as they offer continuity with the red dot sight normally found on M4 carbines. The remainder of the pistol is comprised of Glock factory parts. 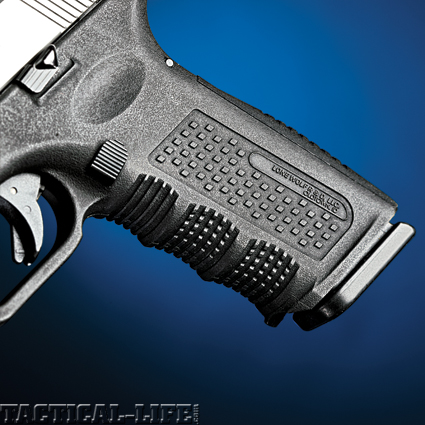 Lone Wolf barrels are made from the finest grade stainless steel and are cut in a number of lengths and configurations. The barrel on the Werewolf is ported to reduce muzzle rise and enhance shot-to-shot speed. It should be noted that internally ported barrels will blow carbon onto the front sight, but since the Werewolf relies on a red dot optic, it is not a factor with this pistol. As a side note, the Werewolf is convertible to a non-ported barrel and even to 9mm or .357 SIG calibers, that’s where the Werewolf comes into play (transforms from mild to wild and back).

There will be a 5% to 8% reduction in bullet velocity when compared to stock barrels, if power factor is a consideration. Muzzle rise, however, can be reduced by 75% or more, depending on ammunition. The Lone Wolf .40 compensator offers a unique advantage via its redirection of gas to a 30-degree rearward angle, which actually pulls the barrel forward to reduce felt recoil. In addition, the redirection of gas vertically provides a genuine reduction in muzzle rise. Between the compensator and the barrel porting, the recoil of the .40 cartridge is all but eliminated.

The Burris FastFire II on the pistol is one of the most advanced mini-red dot sights on the market. The sight is very small, mounts low (especially when “melted” into the slide) and weighs just 1.6 ounces. Its housing is made of metal for strength and durability, while the lens is precision-ground and polished to exacting geometries in order to virtually eliminate parallax and provide a crisp sight picture. It is fully windage/elevation adjustable and features both an on/off switch and a light sensor that automatically adjusts the dot’s brightness. It is powered by a lithium CR2032 battery which is commonly available and long-lasting—a single battery can last as long as five years. 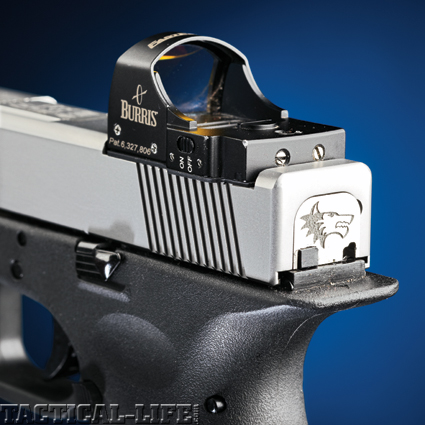 The Burris FastFire II Red Dot Reflex Sight simplifies the act of aiming by eliminating the need to focus on the front sight, rear sight and target. 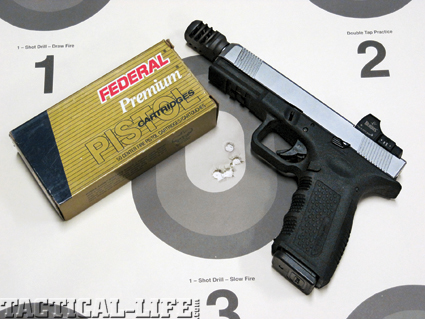 Range Time
As sexy as the Werewolf may be in appearance, looks will only get one so far. The proof of any gun is in how it shoots, so I gathered a cross-sample of both duty- and competition-grade loads and headed to the range. I began my testing by bench resting the Werewolf at 25 yards. Five rounds of each load were grouped and measured at their widest point. Velocity was charted by shooting five additional rounds across the sky screens of my Shooting Chrony chronograph placed ten feet from the gun’s muzzle…err…compensator and the average is reported.

A noticeable reduction in velocity was noted, but was nothing that would cause me concern in regards to bullet performance. The gun proved to be exceptionally accurate, which is a result of the tight fit and close tolerances found in the mating of the Lone Wolf slide and frame in conjunction with the 3.5-pound smooth-faced trigger. While the trigger on this gun did not look to be anything special beyond the 3.5-pound Lone Wolf connector, it came together to offer exceptional let-off and a short reset—something Glock triggers have come to be known for, especially when the exceptional Lone Wolf connector is used. I would be remiss if I did not include the exceptional fit of the grip on the Timberwolf frame and its interchangeable backstraps. With the flat back, the grip feels like a 1911 with a flat mainspring housing, while the curved back reminded me of a Sig Sauer pistol. Of course, the Burris FastFire II offers an exceptionally easy to see sight picture, which always helps when trying to shoot accurately.

The remainder of the test involved shooting the Werewolf fast. This gun was built for maximum speed and to shoot it slow and deliberate would be silly. I used a series of well-known and proven shooting drills to see just how much a “tricked out” gun would enhance my normal shooting performance. I’m interested in anything that can reasonably improve performance without offering a crutch. To me, the biggest difference between competition and combat is rules…if there are rules it’s a sport—if not, it is a fight, and in a fight if you are not cheating, you are not trying hard enough to win.

The first drill was a simple plate rack run. At 10 yards from a ready position, my goal is to clear the plates in 3 seconds or less. I add 0.5 second if I draw from the holster. When using the Werewolf, I was able to break 3 seconds with boring regularity with a “best” run of 2.55 seconds. The “Bill Drill” is six rounds from the holster at 7 yards in the A Zone of an ISPC target. Grand Masters can do this in less than 2 seconds from a competition rig. From my regular carry holster, I can normally do this drill between 2.3 and 2.6 seconds. When using the Werewolf from a Hillsman Boltaron concealment holster, I was able to shoot this drill with all hits in 2.07 seconds. Nice!

The final drill was a classic El-Presidente at 10 yards. My average is 8 seconds with all hits on eight-inch steel plates with an all time best of 5.5 seconds. When using the Werewolf, I set a new all time best of 5.20 seconds. In a nutshell, the Lone Wolf Distributors Werewolf can shoot and will help you shoot better. Though it does help to have a solid understanding of the fundamentals. 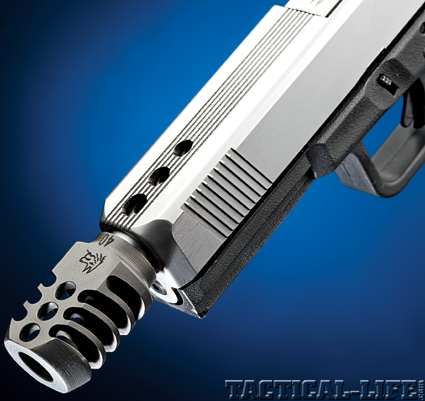 Lone Wolf’s barrels come in a variety of configurations. The Werewolf featured a 5.85˝ barrel topped off with a threaded muzzle.

Final Notes
Would I carry the Werewolf in the street? No, not in this format, but I would use it without the ported barrel and slide as CQB becomes much more “exciting” when gasses are released under your face! The compensator? Probably not, but I could see it on a SWAT or entry pistol where supreme accuracy and speed is essential. The rest of the gun is certainly street-worthy and the package would be right at home in USPSA. In the end, the Werewolf makes as much sense as a street gun as the “Man From U.N.C.L.E.” custom P38, but then that doesn’t make either less cool looking. As a matter of fact, it would not surprise me in the least if Hollywood remakes the classic TV series and the Lone Wolf Werewolf was in the hero’s shoulder holster.

In the end, the Lone Wolf Distributors Werewolf .40 proved to be a very reliable, accurate and fast shooting pistol that would be a great choice for competition. With a bit of modification, a variation of this platform would also be a great choice for urban combative applications. Oh yeah…most importantly…I had a great time wringing out this slick handful of pistol. 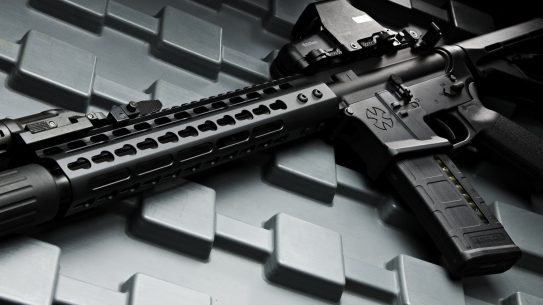 I blame a fictional character named Napoleon Solo for my interest in firearms. A…