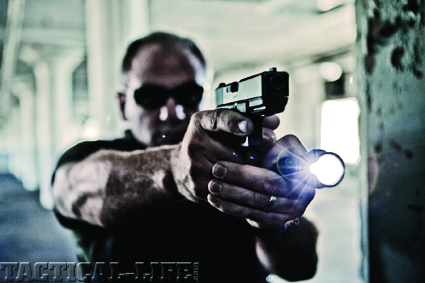 The Rogers/SureFire technique is closer to a standard two-hand hold than other techniques.

If you are unlucky and get into a fight with a felonious miscreant, whether at home or on the street, it is more than likely to be at night or where lighting is poor. That’s just the facts, so it might be a good idea to prepare to fight in the dark.

Just like you can’t learn how to defend yourself with a gun by watching television or reading, you can’t learn low light self-defense techniques by reading a magazine article. Training is necessary and if you decide to get it, you should find a school that has experience teaching low light tactics, techniques and procedures (TTP).
Gunsite Academy is one such school and two of its instructors are Bill Murphy and Giles Stock. Both have extensive experience teaching civilians, law enforcement and military personnel; and Murphy is also the Director of the SureFire Institute, an outfit that specializes in teaching low light TTP. I recently had the opportunity to attend a brief orientation course taught by Murphy and Stock at the Gunsite Academy in Arizona. 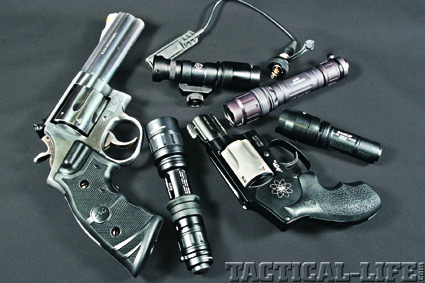 Low light robs you of your vision. For example, going from a lighted room into starlight renders you legally blind even though you can still see a little. Poor vision is a serious problem because to engage a threat, you need to be able to see it well enough to know that it is a threat and not your neighbor who happened to walk into your house by accident, which can happen. A good illumination tool, commonly called a tactical flashlight, is essential to help avoid a tragedy and to prevail if you are unfortunate enough to have to defend yourself.
There is no formal definition of a tactical light, but for the purpose of this discussion it must have a high output, high quality beam with no dark spots that could result in the user missing an important detail like a weapon in someone’s hand. A factory-focused reflector is needed to produce such a uniform beam and adjustable focus lights usually fail this requirement.

A good light will also have a switch that allows it to be turned on momentarily when pressure is applied and turned off when pressure is removed. Additionally, the switch should have a constant-on feature that turns the light on until it is deliberately turned off. The constant-on function of some lights is activated by pushing the switch beyond the momentary-on point and if your light works this way, it is better take a firm effort to engage because you don’t want that light staying on at the wrong time and identifying you as a target. These are important features because in a high stress situation, fine motor skills deteriorate and you will probably fumble with the switch—which also makes putting that switch in the right location very important. SureFire says that location is the tailcap, because when picking up the light in the preferred ice pick style grip, the thumb naturally falls on the tail. 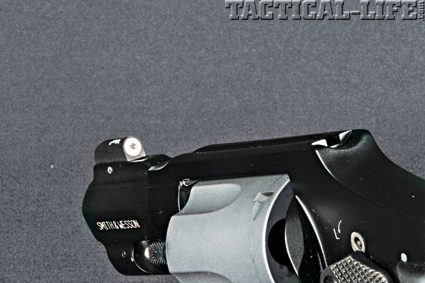 Once the XS Big Dot Sight is installed, it sits out there like a golf ball on the front of the revoler’s barrel drawing the eye to it.

Sights & Lasers
Not only must you see the bad guy to defend yourself, it also helps to see your sights. Certain flashlight techniques like the neck index and modified FBI can help illuminate the sights, but another aid is the tritium filled Big Dot from XS Sights. For testing, I obtained a .357 Mag Smith & Wesson 340PD revolver equipped with a green fiber optic front sight. Eyes see green well, but as light diminishes, all colors fade to grey with white being the last one to completely disappear. Knowing this, XS Sights developed a big white front sight that sits on the barrel like a golf ball. In the center, they stuck a tritium vial so that when it gets too dark to see the bead, the tritium takes over.

What if you don’t have night sights or you’ve been knocked to the ground and can’t align the sights with your eye? Crimson Trace provides an easily installed solution and provided a model LG-308 Lasergrip for a Smith & Wesson 686 revolver chambered in .357 Mag. Once the gun and laser were zeroed, the gun sent bullets to the place the laser dot was pointed, provided of course the target was in range. Lasers are not a gimmick as some people think, but are an aid especially in low light.

Although low light defense is heavily dependent on gear, once you’ve got it, don’t think you’re ready to go. Shooting to defend your life, especially when using a tactical light—is not something that’s natural, and being able to hit a target on the square range in practice is not all that is required. Don’t rely on this article or anything else you read to teach you how to handle a low light confrontation. Instead, find a good instructor. Besides, getting that training will be a lifesaving experience and can be great fun. 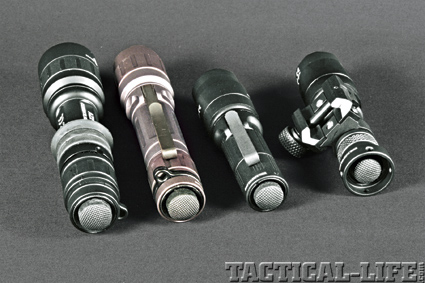 The switches at the tail of these lights are designed to be used under stressful conditions. All feature momentary- and constant-on functions.

Lastly, a good light must have a reliable power source. That makes lithium batteries the best choice because they have a long shelf life, deliver enough power to activate a high intensity beam, are small enough to easily carry as spares and allow the light to dim over an extended period when losing power. At this time rechargeable lights are in use by some police departments, but when they become low on power and begin to dim, they often die rapidly before they can be recharged.

Mounted Lights
There are different types of lights for different applications. A light that attaches to the gun can be dangerous because if the light is used for searching—everything it points at is covered by the muzzle. It does make shooting the gun easier though, because a normal firing grip can be used. A small, hand-held light is sometimes the best choice but it requires special training to use effectively and shoot a gun at the same time because a normal firing grip is impossible. Neither type of light is perfect.

Weapon mounted lights can be mounted on shotguns, rifles, and handguns while handheld lights can be small or large and can be used with all three types of weapons. SureFire has a large selection of all types from small hand-held models to monsters that turn night to day for use on crew served weapons.

One light that is particularly nice for mounting on a long gun with a Picatinny rail is a single cell M300A Mini Scout which I mounted on a Smith & Wesson M&P15. This lightweight unit emits 110 lumens with a run time of 1.3 hours and is equipped with both a tape switch that can be mounted wherever convenient and a tactical end cap that allows momentary- and constant-on options. When mounted on a forty-five degree rail adapter, the tailcap switch can be activated with the thumb of the support hand thus reducing the chance of inadvertent activation which is common with tape switches and can identify the operator’s position.

Also received for testing was a one cell, E1B Backup that is small enough to be carried in a pocket, but that puts out 80 lumens for 1.3 hours and five lumens for 37 hours. The high output can overwhelm an adversary’s night vision and the low power is great for navigating. SureFire also supplied a two cell LX2 LumaMax LED that emits 200 lumens for two hours or 15 lumens for 47 hours. This is a serious fighting light that can easily defeat a person’s night vision and do so at extended ranges. The tailcap switch is pushed partway in for the low intensity beam and all the way in for the high intensity beam. Releasing the switch turns the beam off, but rotating the tail cap clockwise locks either the low or high beam into constant mode.

Lastly, SureFire supplied an AZ2 CombatLight that features a high output spot beam of 150 lumens for two hours and a low output 35 lumen flood beam for ten hours. The tail cap switch works the same way as that of the LX2. This high quality combat light is equipped with a CombatGrip body that is an aid when using the Rogers/SureFire hold, where the light is held between the index and middle fingers like a cigar and the tail cap is depressed with the palm. These lights are expensive, but they are life-saving tools that must be reliable. That costs money. 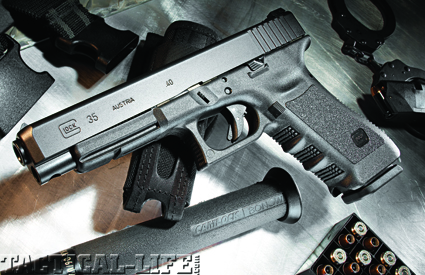 The Rogers/SureFire technique is closer to a standard two-hand hold than other techniques. If…