Just before the close of the 19th century, semi-automatic pistols were gaining in popularity over traditional Colt, Smith & Wesson, and Remington revolvers. Most semi-automatic pistols, however, were small caliber European guns like the famous FN-Browning Model 1900, chambered in 7.65mm (.32ACP). The FN was designed by America’s most prolific gunmaker, John Moses Browning. And while most people think of the .380ACP as a European cartridge, (9mm Short, 9mm Kurz, 9mm Corto, 9x17mm, or 9mm Browning) the .380ACP was developed right here in the US by Browning and W. M. Thomas of the Union Metallic Cartridge Company. That’s right, the .380ACP is an American cartridge. 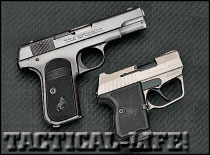 Because of the narrow frame, slide width and trim profile, the Colt .380ACP was a natural for concealed carry and became popular with detectives, lawmen, and lawbreakers. Mobsters loved them in the 1920s. So did the US Government, which issued Colt .380s as a military officers (General Officers Pistol) in WWI and WWII. But it wasn’t until the PPK model was developed in 1931 that the cartridge took on international proportions. Flash forward 78 years and the Walther PPK (and PPK/S) are still being manufactured. With the initial success of the Ruger LCP .380ACP in 2008, “compact” or “deep concealment” .380 semi-autos have become the carry gun of choice for a multitude of people who want a lightweight, sub-compact concealed carry gun in a reasonably substantial caliber. The .380ACP has been that cartridge for over a century. It’s the guns that have changed.

Sharing all the family traits of the world-famous Desert Eagle, Magnum Research’s Micro Desert Eagle .380ACP may be the ultimate sub-compact personal protection semi-automatic. It is small enough to fit into a pocket holster in trousers or jeans, ride in a Galco Yaqui Slide belt holster, or even nest comfortably in a Yaqui Paddle holster, though the rig is nearly as big as the gun.

14-Ounce Lightweight
Unlike other Desert Eagle models, which are made by IWI, the Micro Desert Eagle is made in the US. The company’s first attempt at a sub-compact semi-auto, the Micro weighs less than 14 ounces (empty).

The gun, which looks like it has been machined out of a solid billet of steel, uses a simple but reliable gas-assisted blowback system. The gun gains its edge in controlling recoil and assuring quick cycling by utilizing two recoil springs and guide rods, which ride in channels on either side of the frame and register into dimples at the front of the slide. In every other respect the gun is made as simply and as durably as possible. The double-action-only (DAO) trigger mechanism demands a solid 7.8-pound pull with 0.81 of an inch of travel to drop the hammer.

The frame is one piece with a deep, extended triggerguard that allows quick access to a long, slightly curved trigger. The back of the frame is deeply recessed to provide a solid grip and a deep overlap into the web of the hand. The only drawback is that all of the felt recoil is taken there as well. This was not much of an issue with FMJ .380 ammo, but when we went to the heavy-hitting Federal Premium 90-grain Hydra-Shok JHPs the level of punishment was commensurate with the cartridge. With steel versus hand, steel always wins in the end. Suffice it to say, extended target practice with the costly Hydra-Shok JHPs is only recommended in small doses.

The slide has nine deeply serrated grooves to assist in chambering the first round and there is a visual loaded chamber indicator (red line) on the extractor, which projects from the right side of the slide when a round is chambered.

The Micro Desert Eagle has nicely checkered plastic grips secured to the frame by two Allen head screws. The magazine release is located on the right (sorry lefties, no ambidextrous release) and requires only modest pressure. The magazine itself is made shorter and longer than the grip frame, so it protrudes below the frame, providing a grip area for the third finger and a bottom rest for the little finger. Simple and well thought out by Magnum Research designers.

The lightly brushed steel finish reduces glare off the top of the slide, which has a deeply notched rear sight and a rising, serrated front ramp sight that stands tall between the rear sight channels. Like the Ruger LCP, the Micro Desert Eagle’s hammer is clearly visible at the back of the slide and can be seen as it cycles.

The overall design is well thought out. The deep rear frame recess ensures that the top of your hand and thumb, no matter where you place it, will be clear of the slide as it travels back. There is a slight upturn at the back of the triggerguard that also allows a rest for the second finger of the trigger hand. The one caveat is that if using a two-handed hold, never, ever, place the index finger of the off-hand at the front of the triggerguard.

Carry Options
Being a brand new gun there are very few holsters that will fit the unique shape of the Micro Desert Eagle. Magnum Research is working with both Galco and BlackHawk to make pocket and belt holsters to accommodate the new sub-compact. BlackHawk has already designed a pocket holster that works quite well. Because of the gun’s contours a pocket holster, or belt holster for that matter, needs to leave the small grip frame exposed. The BlackHawk pocket holster is deeply cut down for that purpose, leaving almost the entire grip within easy reach and virtually no visible outline of the gun. BlackHawk is also modifying a typical Blackberry belt pouch to fit the Micro Desert Eagle. It seems they have roughly the same overall dimensions with the exception of the lower grip frame.

Our personal preference for sub-compacts like the Kel-Tec, Ruger LCP, and now the Micro Desert Eagle, is a small belt holster. The Galco Yaqui Slide belt holster (YAQ212) is a near perfect fit for the Micro, placing the grips within easy grasp yet securing the frame and triggerguard in the body of the holster. The adjustable tension screws allow you to tailor the retention to firmly hold the gun in place and the slight outward re-curve of the Yaqui Slide also makes re-holstering easier. We found this to be an ideal belt rig for the Micro Desert Eagle.

Galco’s Yaqui Paddle (YP212B) also provided good retention and placed the grips within easy reach but it is almost too much holster for the gun. Until Galco produces a Yaqui model or other holster specifically for the Micro Desert Eagle the YAQ212 is your best for concealed carry.

Range Time
Using Federal Premium 90-grain Hydra-Shok JHP, average speed through the ProChrono Chronograph was 800 fps (feet per second). We ran some Magtech 95-grain FMJ for comparison and the Magtech clocked 715 fps with noticeably lower recoil and quicker target reacquisition. However, for stopping power in a small semi-auto we would have to favor the Hydra-Shok JHP. While imparting a noticeably more dramatic kick from the short, 4.52-inch-length pistol, almost half of which (2.22 inches) is taken up by the barrel, the gun’s inherent accuracy makes the first and second shots really count and you should have the most stopping power possible. The Hydra-Shok amply fills the bill.

Firing from 25 feet using a two-handed hold and Weaver Stance, the Micro Desert Eagle placed the first two rounds 1 inch apart at 9 o’clock in the 10 ring. Timed fire (1-second intervals) of 6 rounds, resulted in a best grouping of 2.25 inches center-to-center, all within the 10 and X of a B-27 silhouette target with 4 of 6 measuring under 1 inch in the 10 ring.

Of course, any test of a self-defense compact handgun under ideal conditions from a distance of 25 feet, with no real threat, no adrenalin rush or the possibility of the B-27 target shooting back, is going to look good on paper. Given the accuracy, solid construction, and ease of operation, in a real-life situation one could do much worse than the Micro Desert Eagle. To make things less than ideal we stepped off 10 paces (about 30 feet) from the target, turned, drew and fired six rounds as fast as possible. All six came in low, low being the 9 ring (with one cutting into the 8) spreading from 4 o’clock to 8 o’clock and measuring 5 inches from the widest group to a pair under an inch in the 9 ring at 6 o’clock. Most old timers would call them gut shots, but any would have slowed, if not incapacitated, an adversary.

Final Thoughts
The idea of a sub-compact .380 is a last ditch effort to survive a life and death situation. As a back-up gun, the Micro Desert Eagle is built like a brick, easy to sight, and loaded with jacketed hollow points, a formidable piece at close range.