596
SHARES
36
VIEWS
Share on FacebookShare on Twitter
The new NAA Ranger is a top-break design that is reminiscent of the S&W No. 3 Schofield. The frame latch is lifted, allowing the barrel and cylinder to be rotated forward.

For those few who are not familiar with North American Arms (NAA), the company was started in the early ’70s and established a reputation for producing the “world’s smallest” revolver. Its first mini-revolver was chambered in .22 Short and was only 3.6 inches long, 2.38 inches high and weighed in at a mere 4 ounces. NAA later expanded its line, and the size of its revolvers, by adding models in .22 LR and .22 Mag. These little revolvers became a cult hit with both the civilian and law enforcement market. While some shooters didn’t, and still don’t take them seriously, the little revolvers earned a legitimate place in the self-defense market. After all, “It was the gun you could carry when you couldn’t carry a gun.” NAA’s Ken Friel tells the story of a narcotics agent who did a drug buy on a Florida beach wearing only a speedo—he hid a NAA mini-revolver in a drink cup. That is creative police work. 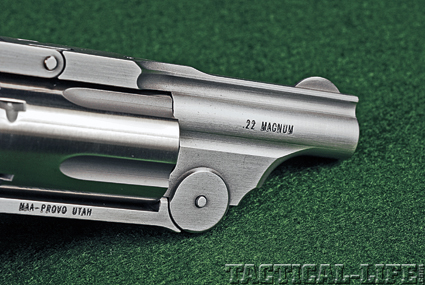 The contours of the Ranger’s frame and barrel are inspired by the Schofield revolver, with crisp markings and no machine marks.

The minute size of the revolver and its reliability is a testament to the engineering, design, and quality of NAA’s manufacturing process. The one common complaint with the original Mini-Revolvers is the process of loading, unloading, and reloading. The only way to access the cylinder is to remove the cylinder pin and then remove the cylinder from the pistol. This must be accomplished anytime there is a need to load, unload, or reload. The process is not difficult, but it is tedious and time-consuming. NAA set out to address that and, in the process, created a work of art.

Revolver Details
I recently received one of the first production units of NAA’s new .22 Mag top-break design, which has been given the name “Ranger.” I must admit to using a word I despise when it comes to firearms—“cute.” The Ranger appears to be a miniature No. 3 Schofield with the topstrap featuring a hinged latch that, when lifted, allows the barrel and cylinder to be rotated forward. The pivot point is a round extension on the front of the frame that, again, looks like a No. 3. When the barrel and cylinder are rotated forward, a cam raises the cylinder star to extract the empty cartridges. As the barrel reaches the stop, the star retracts to allow fresh cartridges to be loaded. 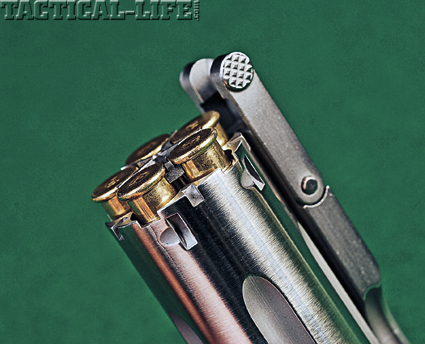 When the cylinder is pivoted forward, the extractor star is lifted to loosen the spent cases.