As a kid, I was endlessly fascinated with all things that burned gunpowder. I was lucky because I was around many great guns. My father was the custodian of a National Guard Armory. My parents viewed my growing preoccupation with firearms with only mild alarm and I was allowed to shoot some pretty exotic stuff when the opportunity came along. One of my earliest memories was my late father talking to a group of young soldiers about the sidearm he carried through World War I. “It was a big Smith & Wesson revolver that shot the same cartridges that we used in the Colt Automatic,” he said. Then he went on to describe an exotic-sounding device called a half-moon clip. 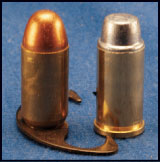 “You clipped three rounds into this clip, then three more in another one and that did the trick for a sixgun,” he concluded. Just a few years later, my brother-in-law got a DCM 1917 revolver (a Colt, as I recall) and I saw my first half-moon clip. Too many decades have ticked off the calendar since those happy days of innocent youth, but I continue with my fascination with .45ACP handguns of any type and the varied ammo that can be fired in them. That includes the venerable .45 Auto Rim cartridge.