Dick Heinie opened his shop in 1973 and went on to become known for premium, quality 1911 pistols. To say his guns were custom does not really do justice to his work. Custom work can be as easy as bolting on new parts. The best description to use for the guns that come off Dick’s bench is “blueprinted.” That is to say fit, finish, and design were as close to perfection as humanly possible. 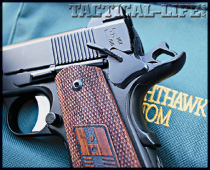 Not being satisfied with existing sight systems for the 1911, Dick introduced a very successful line of sights in 1979. The Heinie Slant Pro and Straight Eight sights provide a distinctive profile and proved to be extremely popular. As Dick’s reputation grew, so did his business. His backlog for custom pistols increased from months to years. It finally got to the point where he stopped taking new orders for custom pistols. Dick, being pragmatic, will admit that he may not even finish all the orders before he goes on to meet his maker.

This does not mean that Dick has stopped working or retired. He continues to develop new sights, fill orders for custom pistols and work on new projects. It was a surprise to know he was spending time conversing with the folks at Nighthawk in early 2009. At a recent show, Dick introduced me to Nighthawk Custom’s president, Mark Stone, and the rest of the crew. It turns out that several years ago Dick had an opportunity to test some of the first Nighthawk Custom pistols. He was impressed with the pistols and the company’s potential, and soon he became a regular visitor to the shop. Dick was more than willing to share his years of experience and trials and errors, with the Nighthawk crew to help make a good product even better.