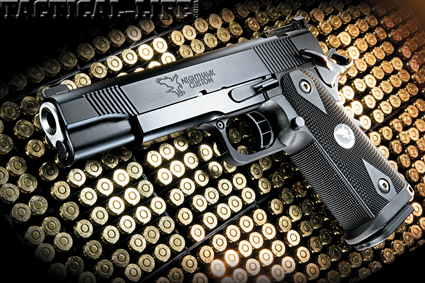 Some people are in love with the 1911 pistol and shun all others. However, for a long time some 1911 lovers have wanted—some secretly—more magazine capacity or different calibers than the 7 rounds of .45 ACP that the original M1911 featured.

Until recently Nighthawk Custom offered only single-stack 1911s, although it would build a gun chambered in a cartridge other than .45 ACP. Continued requests for a high-capacity 1911 caused Nighthawk to consider a wide-body, but a major problem was how to make such a gun in all the different models of the 1911 that the company manufactured. Finally, Nighthawk solved the problem with its high capacity FLX—pronounced “flex”—option that is available for several of their 1911 models in either 9mm or .45 ACP chamberings.

Gun Details
The Talon FLX chambered in 9mm that was received for testing is suitable for self-defense, law enforcement, recreational shooting or for competition, and despite its wide body this recoil-operated Browning single-action, semi-automatic 1911 is like any other in function. The difference is in the frame and grip assembly. 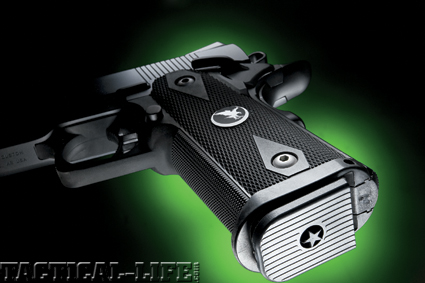 The polymer grip is attached to the steel frame by screws at the front of the triggerguard and the two upper grip screws and features a beveled mag.

The frame portion of the assembly lacks the frontstrap and support structure for the mainspring housing that are found on a standard 1911, and instead these components are part of the grip. The frame is manufactured of steel, is finished with black Perma Kote and has a square dust cover with beveled corners instead of the round style found on a traditional 1911. The black polymer grip portion, which also includes the triggerguard, is mated to the frame and held in place by the two upper grip screws and two screws at the front of the triggerguard. The two lower grip screws are there because the gun just wouldn’t look right if they weren’t. Fit and finish of the two parts were excellent. The mainspring housing is also black polymer and both it and the frontstrap bear 20 lines-per-inch (lpi) checkering that provides a good gripping surface but does not seem to be overly aggressive. The grip side panels feature diamond checkering along with the Nighthawk logo, and the four Allen head grip screws and the triggerguard screws have been left in the white.
The idea behind the FLX grip and frame is to provide room to stuff more cartridges. You would think then that in order to store 17 rounds of 9mm the grip would have to be a lot wider than the grip on a standard 1911, but it measures the same 1.27 inches wide as a Nighthawk Predator—which I happened to have on hand—with traditional grips. From the front to the back of the grip, the FLX measures 2.11 inches compared to 2.04 for the Predator. Overall except for the fore-to-aft length of the grip portion of the frame noted above, the rest of the gun’s dimensions are the same as those on a standard 1911. The main difference turned out to be the boxier circumference of the FLX grip with its square corners, compared to the oval design of a standard 1911 grip. Despite the difference, my medium size hands found that a good grasp was not at all difficult to obtain. 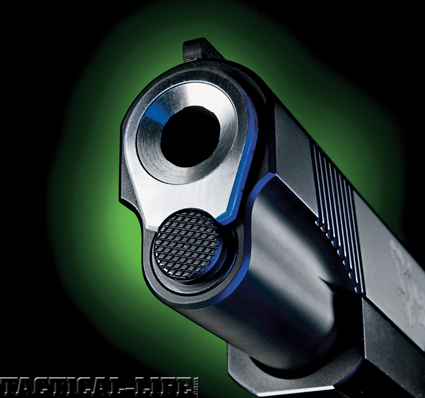 The 5-inch 416D stainless steel match-grade barrel with its 1-in-16-inch left-hand twist rifling has a beveled crown that ends flush with the match-grade barrel bushing. The feed ramp is integral to the barrel and has been polished to enhance feeding, something that is especially important with hollow point ammunition. The recoil spring plug is standard 1911 fare as is the short guide rod. 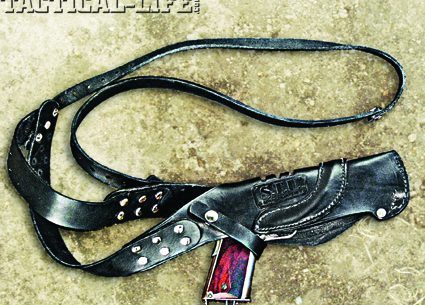 The Nighthawk Talon FLX is a wide body, high-capacity 1911 that can be had…