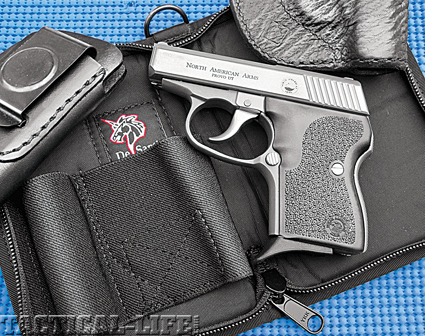 The Guardian .32 NAA fires a round, designed in conjunction with CorBon, that produces more velocity, energy and incapacitation potential than any conventional jacketed hollow point load in .32, .380 or .380 +P—with less felt recoil.
Comment(s)

Pocket pistols are one of the hottest items in the firearms industry. With most states currently having CCW laws on the books, more and more legally armed citizens are exercising their right to personal security by going armed. While many experts advise carrying a full-size 1911, Glock or other full-size handgun, the reality is that most people want a gun that they can carry easily with little drama or fuss. This means some type of small revolver or pocket semi-auto is in their future. The problem with these compact “pocket rockets” is that they lack the power needed for rapid incapacitation. While this claim could justifiably be made for any handgun of any caliber, it is especially true of these short-barreled guns that fire a small bullet with minimal barrel length. Bolstering the power factor of a small caliber is usually accomplished by increasing the projectile’s velocity, which is about the only thing that can be done. After all, you can’t make the bullet bigger… right?

North American Arms (NAA) has been in the business of supplying citizens with compact, easy to carry but high quality handguns for a long time. Their line of mini-revolvers, compact pistols and accessories is both unique and diverse. In the past, getting anything from NAA was problematic as everything they built was sold quickly which resulted in several models being dropped from the line so that they could keep up. Recently, NAA announced that they had upgraded their production capability, which has allowed them to reintroduce two unique cartridges that were built especially for them in cooperation with CorBon Ammunition. Both are bottlenecked loads that increase the velocity of traditional calibers. Recently, I had the opportunity to look at the one I prefer—the 32 NAA Guardian.

Gun Details
In a recent press release, NAA President Sandy Chisholm discussed the reintroduction of the .25 and .32 NAA Guardian pistols by stating, “Our new manufacturing capability has enabled us to assure our customers of regular production and a timely supply of this popular platform. As personal protection specialists, we felt it was our role to pioneer this important development to create a new benchmark in extreme high-performance handgun ballistics.

We were supported in this task by Ed Sanow, recognized ballistics expert, as well as the team at CorBon, a company whose brand is synonymous with high performance ammunition.” The .32 NAA is an updated cartridge/firearm “system” designed and developed by the partnership of NAA and CorBon Ammunition. The cartridge is based on a .380 case, which is necked-down to hold a smaller .32 bullet. The benefit is a remarkable gain in ballistic performance and the .32 NAA Guardian pistol is designed around this cartridge. The pistol is identical to the .380 ACP Guardian, differing only in the chamber and the size of the bore. 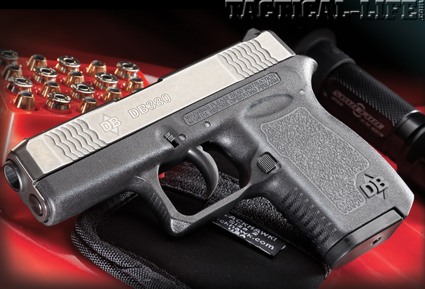 Pocket pistols are one of the hottest items in the firearms industry. With most…