In 1972, Wayne Novak graduated from college. Like many young men, he knew that he would end up in one form of business or another, so he majored in Business and Personnel Administration. After working in a related field for a couple of years, he wasn’t completely happy with the way things were going and looked around for something that offered greater challenges and rewards. 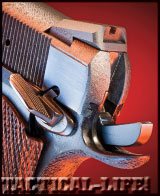 Having a general interest in firearms, particularly shotguns, nudged him toward gunsmithing. He enrolled in the gunsmithing program at the famed Colorado School of Trades and quickly discovered that he not only had the aptitude for the work, but genuinely enjoyed working with guns and around gun people.

For those of us who are absorbed with handgun matters, this was a fortuitous turn of events. Over the intervening years, Novak has become a household name in the handgun industry. Novak’s shop is the source of thousands of fine custom handguns. His fertile imagination is the source of a pistol sight design used on well over a million handguns.

The Beginning
After gunsmithing school, Novak moved to a small shop in West Virginia that did general gunsmithing and some specialized shotgun work. After that, he spent some time running a trap and skeet club in Illinois. Then it was back to California to assist Jack Mitchell, a trade school friend with a book on pistolsmithing. He ended up apprenticing in the California shop of Armand Swenson, one of the pioneers in the pistolsmithing trade.

A couple of years experience working almost exclusively with Colt .45s polished his pistol knowledge to a high degree. Eventually, he moved back to West Virginia and established his own .45 shop. He also became acquainted with several handgunners who helped focus his attention on certain special needs in the custom handgun market. A number of shops were beginning to specialize in the IPSC race guns or super accurate bull’s-eye guns, but not many were working on concealed carry guns.

None of these guns were fitted with shootable sights that addressed the special problems that come with carrying them concealed or in other circumstances where they’re handled and manipulated under stress. When his most famous product was offered to the handgun market, Novak resolved all of those difficulties.

Novak spent long hours working to develop the sight, but he also broadened his base of experience with other popular pistols. He is vocal in crediting the value of his relationships with shooters like Ken Hackathorn and Tommy Campbell.

By the early 1980s, Novak had attended Smith & Wesson’s Armorers school and was actively working with S&W’s Tom Campbell on pistol improvements that led to S&W’s 3rd generation pistols. Of the 22-plus improvements used on that series of guns, Novak is credited with 16 of them. I know that is true, because I was in the room when a senior executive of the company, speaking to the nation’s assembled gun writers, said so.

Shortly thereafter, S&W announced that the Novak sight system would be exclusively used on all fixed sight pistols in the 3rd Generation series.

Custom Hi-Powers
It was also in the early 1980s that Novak began to consult with various police and military agencies on the East Coast. He did custom work for the FBI’s elite HRT (hostage rescue team) troops for a number of years, particularly in regards to the Browning Hi-Power pistols they were using. The basis for his experience broadened with visits to other armorers schools and competitive shooting venues around the country.

By the late 1980s and early 90s, Novak had several well-qualified pistolsmiths in his employ and they were cranking out one superb custom pistol after another. As much as he respects the much-favored Colt Government Model .45, he has long been associated with the Browning Hi-Power pistol. In fact, this was the pistol that Novak most commonly used in shooting competition. There is something of a cult status flourishing around the Hi-Power as built by his shop. Naturally, they are equipped with a special version of the LoMount sight.

They also have a special extended safety that gives you a little more leverage on the typically hard-to-work Browning thumb safety. Hi-Powers often bite the hand that fires them and Novak has solved that difficulty with a so-called “No-Bite” hammer modification.

Custom 1911s
Other than sights, the most popular product of the Novak shop is a finely customized 1911 .45 pistol. If you consult his catalog or web site, you can view a long list of options that are available. There’s also a short discussion of what you really need on your personal carry gun. Sights and a reliability tune are the most popular options. A gun with these modifications can turn an ordinary .45 into a shootable companion that’s good for a lifetime of service. Many shooters like to take it a little farther, with a duty trigger job.

Novak’s triggers aren’t particularly light, but they invariably break clean and don’t follow. If you plan on carrying your Novak custom a good deal, spend the extra money for a carry bevel package. This is a subtle reduction of any edge or corner that might make the gun even the slightest bit uncomfortable to manage. You can spend more money in checkering by Pete Single or grips by Craig Spegel. If you need an upgrade in the accuracy department, Novak will fit a premium barrel by Bar-Sto or Kart.

What you get back is a gun that works reliably, handles well and looks first class. Lots of pistolsmiths get big bucks for exotic finishes and various bells and whistles that don’t make a lot of sense. You won’t be able to get Novak to do this kind of thing. The motto of the shop is “real guns for real people” and they mean it.

Novak Sight
Novak fired many IPSC matches in his early days. This experience, along with endless conversations with experienced pistol men about sight design, led to the development of the famous Novak sight. At this writing, the number of Novak sights sold exceeds one million and isn’t very far from the three-quarters point in the second million.

The sight is made in many variations and styles, but the basic shape is the same on all of them. And, although the sight is patented, it has been closely imitated and outright copied by dozens of other makers. What features could a simple block of steel have that drives sales and imitation like this?

It’s the shape that does it. A Novak rear sight rides on the upper rear of a pistol’s slide, dovetailed in place and firmly secured with a vertical set screw. In profile, the sight forms two lines that create a wedge shape with the longer line rising from top surface of the slide back and up to the uppermost edge of the sight. The second line drops from this point down to the slide top, close to its rearmost corner. It is a very clean, businesslike shape, softened slightly by bevels on the front edges and slight radii on the rear ones.

Viewed from the rear, the shooter’s eye perspective, there are vertical sides and a horizontal top, with a 45-degree bevel at the top corners. On the flat rear face of the sight, we have a recess with the actual sighting notch centered therein. Every one of these contours and angles is there for a reason. The need for that front angle becomes apparent, there are no sharp edges like on other sights.

This means that malfunction clearance drills are far easier to perform. Every edge and corner is defined and crisp, but not sufficiently sharp as to create a handling problem. Also, understand that Novak makes two kinds of rear sights, the dovetail mount and the low mount. By the nature of their design, many contemporary pistols do not adapt to the low mount design, which is certainly more appealing, but needs some precise machining for installation. The dovetail mount variety goes right into factory dovetails.

From front to rear, there is a considerable amount of steel in a Novak sight. It is there for a reason. At the time the sight was designed, some shooters were using tritium dot night sights. The thicker Novak design is one of the easiest to install these little tubes of glow-in-the-dark material. When it all started, Novak had a handful of design problems to resolve. He whipped every one of them and produced a visually appealing product in the bargain.

Final Notes
Novak’s place in the handgun world was well established by the end of the 20th century and shows no sign of lessening in the 21st. The shop is running very well with several top-notch people and Novak himself, all doing their thing. More prestigious clients and agencies specify the sight every year, including the Marine Corps for their SpecOps guns and the FBI for their HRT team sidearms.