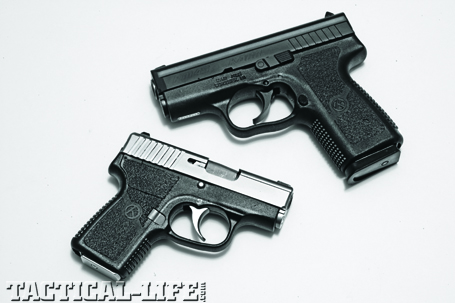 Kahr Arms has managed to do something few other firearms manufacturers have: they started with a winning design. In just over a decade, their formula—single-stack, double-action-only semi-autos intended for concealed carry—has varied only in terms of size, materials, and caliber. Since the initial introduction of the 9mm K9, Kahr’s line has expanded to include pistols in stainless steel and polymer, in .40 S&W, and, most recently, in .380 and .45 ACP. Both the P380 and the big-bore PM45 come with a polymer frame. The P380 I was sent for testing is a two-tone with a satin stainless slide, while the PM45 is all black.

P380 Details
Their first pistol in .380 ACP, the P380 has all of the features of the bigger Kahrs, only downsized for the smaller cartridge. In maintaining big-gun features such as usable sights, a slidestop, etc., the P380 avoids the common pitfall of many small-caliber pistols, which are rendered less useful by leaving these things off.

When I say the P380 has been “downsized,” make no mistake, this is a little gun, about the size we used to expect for .25’s. Compared to the ubiquitous Walther PPK, the P380 is barely shorter in the butt, about an inch shorter in overall length and, at 11.5 ounces, weighs just over half of the steel-framed PPK’s 21 ounces. All of which puts it well within the same class as the Ruger LCP and Kel-Tec .380 ACP.

P380 Range Time
Due to the dramatic shortage of ammunition in .380 ACP, I was only able to fire about 100 rounds through the P380, virtually all of which was Hornady’s 90-grain XTP JHP. It fed well and hit beautifully. I shot it on steel plates at 7 yards, with great results, and was able to print handheld groups in the sub-2-inch range at the same distance. This may have to do with the Lothar Walther barrel that’s used in the P380. The German barrelmaker, founded by the son of Carl Walther, produces barrels capable of superb accuracy—I’ve seen 0.25 of an inch, 100-yard groups, out of a 16-inch AR with one of their barrels.

Nonetheless, intrinsic accuracy is of little use if the pistol isn’t designed so that it can be used. Although I’m well acclimated to single-action autos, I had no trouble shooting the P380, and found that the sights, while low profile, were still easy to use. While the general perception is that small pistols are not accurate that’s simply not the case with this one.

Will the Kahr replace the PPK that’s lived on my ankle for over a decade now? That’s a good question, and one I’d struggle with…to be candid, only an appreciation for history argues in favor of the Walther. If I were carrying a PPK as a pocket gun, however, the smaller P380 with its greatly reduced weight would no doubt be the better choice. 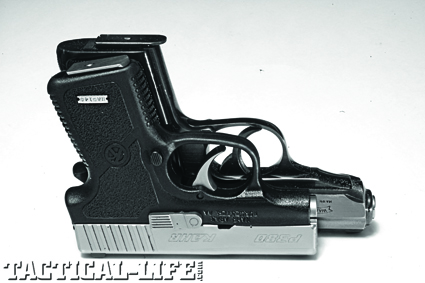 PM45 Details
The PM45 is a more complicated question. In terms of physical dimensions, it compares very favorably with the compact M1911’s that we usually think of when we talk about compact .45’s. Its slide/barrel assembly is a half-inch shorter than the diminutive Detonics CombatMaster, and the grip is a little over a quarter of an inch thinner. Similarly, the PM45’s butt, which holds a 5-shot magazine, is a half-inch shorter than that of Kimber’s tiny Ultra Carry .45 ACP. While the Kahr’s slide is the same length as the Ultra, by the time you add in beavertails, hammers and so on to the M1911, the Kahr comes out the clear winner in overall length, by almost an inch. In weight, the PM is also obviously ahead at 18 ounces unloaded; it’s a half-pound lighter than the alloy Kimber and nearly a full pound lighter than the all-steel CombatMaster.

However, the small size and light weight come with some costs. In this case added recoil and the narrow range of ammunition that’s suitable for the little .45 ACP. In testing the PM45, longtime shooting buddy Phillip Price and I put 250 rounds through it in one range session, all of it full-power .45.

PM45 Range Time
Recoil was significant, to say the least, but accuracy was excellent. Just for giggles, I tried to hit the steel plate rack at 50 yards with it. After hitting it with the first two rounds, it had my attention. When I realized that the truncated .45 would bang the big gong at 100 yards with virtually every shot, I was getting more and more impressed. While shooting a compact handgun at rifle ranges may seem absurd, it’s great practice. Your mistakes are greatly magnified at that range, so you have to pay close attention to every aspect of your shooting. Nonetheless, at closer ranges, such as 25 yards and in, the PM45 performed equally well. 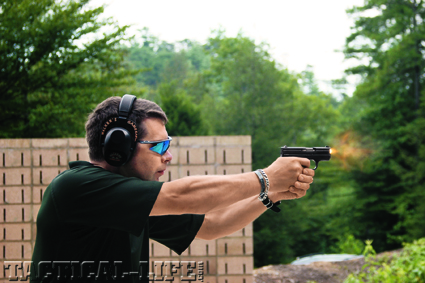 Halfway through the range session the pistol began having feeding problems: the slide would stop partway into battery. A firm slap on the magazine base would cause the slide to drop into place, ready to go. Eventually, I realized that it was hand fatigue. After I had fired about 150 rounds, I wasn’t gripping the pistol as tightly, and as it recoiled upwards, my little finger was pulling downwards on the extended floorplate of the magazine, causing it to misfeed. While the PM45 would probably benefit from the flat magazine floorplate that comes on the P380, there are very few shooters (and no defensive shootings) that will fire enough rounds at one sitting to develop that kind of fatigue. This is a handgun meant to be carried much and shot only a little. Grip it firmly, and all should be well. If you lack hand strength, you may want to consider a Kahr in another caliber.

With that only exception, reliability was good. Most of what I shot out of the PM45 was 230-grain ball from CCI and Federal, but it also digested a 50-round box of Remington 230-grain JHP’s, as well as specialty rounds from SBR and Extreme Shock. This is not to say that you should simply pick a box of your favorite rounds and stuff them in the magazine without trying it to make sure they work.

My reloads with Hornady’s 200-grain XTP JHP wouldn’t chamber in the PM45, and 200-grain +P CorBon fared little better. Shooting the +P CorBon was, frankly, punishing. Not only did the pistol recoil violently, it didn’t feed well, and the higher-pressure round magnified the pistol’s occasional tendency to kick empty brass back into your forehead—in this case, hard enough to actually draw blood.

Final Notes
Remember that each semi-autopistol represents a balancing act between several different factors, such as slide mass, the power of the magazine and recoil springs. The smaller a given pistol is, the more critical this balancing act is, and the less forgiving it is of variations in the power of your ammunition. All this to say that I would avoid +P ammo in the PM45, both for reliability reasons, as well as the added recoil. 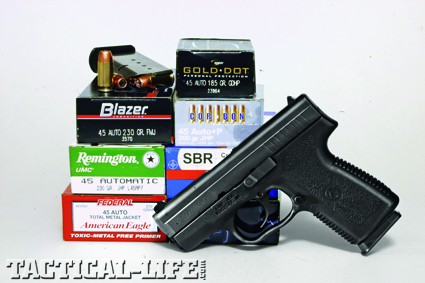 While the recoil is not uncontrollable, the harder the gun kicks, the more difficult it is to deliver the rapid follow-up shots that may be required in a defensive situation. Although I usually prefer full-power ammo, for the PM45, a reduced-recoil round such as those offered by Federal may be an excellent compromise between stopping power and controllability.

The PM45 has everything we expect from a modern concealed-carry pistol: it hits where you point it, it’s small and therefore more likely to be carried, and it’s chambered for a serious fight-stopping cartridge. While it’s usually wise to carry the largest pistol you can reasonably conceal, for those circumstances that demand a physically small handgun, the PM45 has a significant size advantage over other .45 ACPs. Find out more about the entire Kahr Arms line at 508-795-3919 or visit their website at kahr.com.

Kahr Arms has managed to do something few other firearms manufacturers have: they started…