0
SHARES
802
VIEWS
Share on FacebookShare on Twitter
Para’s Warthog packs 10 + 1 rounds of .45 ACP into a short, night-sighted package that proves to be a natural for concealed carry.

The history of Para USA has been one of offering more from the M1911 platform. First, it was the high-capacity, double-stack .45 that they’re best known for, then it was the LDA double-action variant, then the longslide Super Hawg, and then other small variations, such as the coil-spring-powered Power Extractor, that have set them apart from other M1911 makers. Among their latest offerings is the short Warthog, a night-sighted variant, nicknamed the “Nite Hawg.” Like their other pistols, the stubby 3-inch barrel and 10-round capacity of the Warthog offer more in the way of performance and capacity than many would expect from a compact M1911. 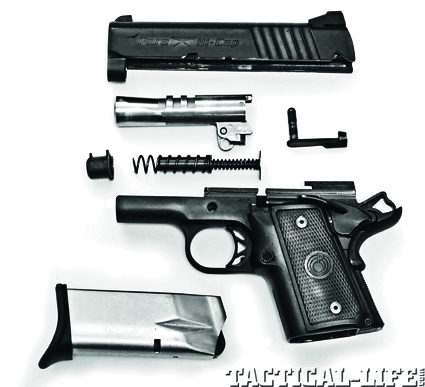 Since the telescoping recoil spring isn’t a captive unit, nor is it the obstinate one-piece version, the Warthog fieldstrips easily without any tools.

Cloaked in a non-reflective black finish, the Warthog comes in the customary green Para USA hardcase along with an instruction manual, DVD, and logo cable lock. Two of the fat double-stack magazines come standard: one flush-fit, and another with a Pearce grip adapter that adds extra grasping surface to the front of the pistol’s floorplate. Both hold 10 rounds of .45 ACP. As for the pistol itself, we’ll start at the top of the slide and work our way down.

Sights are Para’s own with three-dot Trijicon tritium inserts. Both the front and rear are dovetail-mounted with the fixed rear sight being held in place by a healthy-sized hex-head set screw. The rear sight also has a slight forward-facing shelf near the top of the sight.

The integrally ramped bull barrel, which dispenses with the traditional M1911 busing arrangement, is one of Para’s stainless-steel match-grade barrels. While “match” means different things to different people, Para’s barrels are capable of excellent accuracy—the last Para pistol I tested averaged 1.5 inches at 25 yards from the Ransom Rest, which is unbelievable accuracy for a production handgun. The Warthog’s barrel also comes with a notch machined into the rear of the barrel hood to serve as a loaded-chamber indicator. While there’s nothing wrong with incorporating this feature into a pistol, bear in mind that a little dirt and grime in that notch will make it impossible to see that faint yellow wink of brass from a chambered cartridge. There’s no sound in the world as loud as a “bang” when you expected a “click,” (except perhaps a “click” when you expected a “bang”), so if you have any question about whether a pistol is loaded, crack the slide and do a visual or tactile check.

Until the trigger is pulled, the firing pin is locked in place with a Colt-style Series ’80 firing pin safety, and the Warthog also incorporates Para’s Power Extractor. While the extractor (along with magazines) is probably the single most important part when it comes to reliability in an M1911, the traditional straight M1911 extractor relies on its temper and bend in order to keep proper tension on the extractor hook.

However, the Power Extractor features a massive, pivoting hook that is held in tension with a petite-yet-stout coil spring contained within the shaft of the extractor.

The ejection port is slightly flared at the rear and the slide cocking serrations are Para’s distinctive shallow, concave grooves. Both the hammer and trigger are skeletonized, and the trigger has an overtravel screw that can be adjusted through a hole in its serrated face. The trigger pull, which I would estimate on the high end of the 4-pound range, broke cleanly. The take-up had a slight stack to it, but once you got to the business part of the pull, there was no creep, and no perceptible overtravel.

The thin grip panels are black plastic with a smooth border surrounding the shallow, molded-in checkering, and feature a Para logo in the center. The small hex-headed screws that hold them in place have a small rubber o-ring that slips over the threaded part of the screw and, when tightened, is sandwiched between the grip panel and the head of the screw. It’s a great, simple solution to the problem of grip screws backing out, and one that should be used more often.

The broad frontstrap has nine vertical serrations machined into it to give added purchase, and the shortened mainspring housing comes checkered. External safeties consist of a strong-side-only thumb safety with a long, extended pad, and a shortened beavertail grip safety with the beginnings of a “speed bump” on its lowermost contact area. Since many really short M1911’s omit the grip safety entirely, it’s impressive that they managed to keep a functional one in place on the Warthog. The broad magazine well is beveled only in the front, but remember, with a double-stack magazine, your most significant bevel is on the magazine, not the gun. 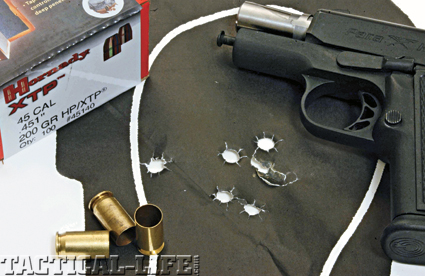 Head shots at 25 yards with a subcompact .45? You’d better believe it—that’s five rounds, fired by hand (one hole is a tear, and not a bullethole).

Shooting Impressions
Test ammo, due to shortages of factory ammunition, consisted of 500 rounds of my handloads. Loaded with 6.1 grains of Winchester 231 under a 200-grain Hornady XTP jacketed hollowpoint and assembled on a Dillon 550, this is one of the most consistently accurate rounds I shoot. Unfortunately, testing revealed that my loads were a little on the long side. While the first 150 rounds fed and fired flawlessly without a hiccup of any kind, after that, the pistol began to balk, not fully seating the chambered round. When I took a look at the rounds that weren’t seating, I could see the scrub marks on the bullet where it was engaging the rifling when chambered.

Since my usual custom is to never clean or oil a gun during the course of testing, I continued firing it, pushing the slide forward into battery when necessary. When I finally broke down and oiled the pistol, somewhere around the 400-round mark, the pistol once again ran like a sewing machine, and, even though the test rounds remained too long, the Warthog still chambered them and fired them without difficulty.

Accuracy was exceptional, especially considering the short barrel and sight radius of the Warthog. While most people complain that short guns lack accuracy, that’s really not true. They’re just very hard to shoot well, largely because the short sight radius makes it more difficult to be sure that you’ve got the sights properly aligned. Sight misalignment is more obvious on a longer gun, where every minor variation is plainly visible. 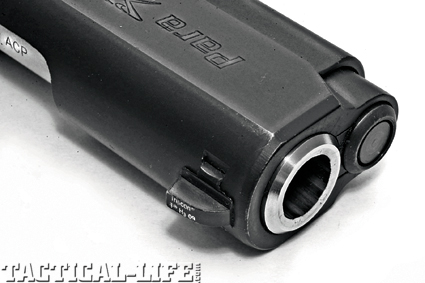 Like many short .45’s, it omits the 1911’s barrel bushing, instead using a conical area to mate directly with the inside of the slide.

At 25 yards, shooting from a modified Weaver position, my groups hovered around 4 inches with some going down into the 2-inch range. I consider that excellent accuracy from a large-caliber pistol with a footprint just a little larger than your average wallet. Twenty-five yard headshots with a subcompact .45? You better believe it.

Recoil, while significant, was manageable—the only time it manifested itself was in very long range sessions, when the bottom corner of the mainspring housing had a tendency to raise a pretty ugly blister on the lower part of my palm. However, that was from firing hundreds of rounds at one time, so I can’t consider that typical for your average range trip with the Warthog.

One of the challenges of short .45’s is that the greatly-increased slide velocity of the shorter guns requires the magazine springs to be exceptionally strong in order to feed the next cartridge up in the narrow window of time before the slide slams shut again. The good news is that the Warthog’s magazines never failed to feed: the other side of the coin is that they can be very hard to load. After about a dozen times, I was having to use both hands to get the last two rounds in, and as I neared the end of testing, there were times I couldn’t get the top round in at all. Assuming that you’re going to be enthusiastically indulging in spirited 300+ round range sessions like I did, get an UpLULA. Available from Brownells, this little gem slides over the top round in the magazine and lets you use the strength of your whole hand to feed the cartridge in, instead of just your thumb and forefinger. I won’t be doing any more high-round count testing of a pistol like the Warthog without one.

Final Notes
In the final analysis, the Warthog performed excellently. Any failures were the result of ammunition that was out-of-specification, and with proper lubrication, it even fed that. The only complaint I have about the Warthog is that when the slide stopped out of battery, the hammer still dropped when the trigger was pulled. With that addressed, I would have no hesitancy whatsoever in carrying this tiny 1911 for personal protection.

The M1911 has come a long way in its near century of existence, and some of its most visible strides have been made by Para. In producing a short .45 that packs more firepower than a full-size Government Model, they’ve taken another big step to make the M1911 a formidable concealment pistol. PARA-usa.com.