In the spring of 2007, my wife and I drove from home near Fort Worth, Texas to visit family in New Orleans. I carried a CAR-15 in the trunk of our car, secured my Heckler & Koch P-7 in the glove compartment and armed myself with a vintage Browning P-35, my weapon of choice since serving on the Hostage Rescue Team (HRT).

Our journey to Louisiana was uneventful and our return on a warm Sunday afternoon started as a leisurely drive until the Dallas/Fort Worth area on I-20. My wife wanted some bottled water. I pulled into a service station on the north side of I-20. We had fuel, so I bypassed the pumps to park and run into the mini mart.

As I pulled past the pumps and store entrance, I noticed a bandit barrier protecting the cashier. My antenna went up: There was enough concern over robberies to protect their employees. Better be alert. 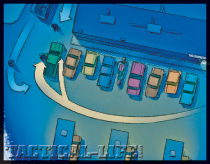 I nodded toward the dumpster and under my breath said to my wife, “I don’t like that one.” We entered, purchased water and exited the front door to return to our car. I took my wife’s arm and steered her toward the center of the lot, toward the pumps, not along the sidewalk. I wanted space for time to react if necessary.

Our route to the truck was a gentle arc, letting me visually cover most of the parking area. Using the sidewalk between parked cars and the mini mart would have been seriously impeded my ability to see a threat before it was upon us. Training and experience have taught me to rapidly close with an opponent in a CQB (close quarter battle) situation and give him little time to react.

In the HRT, our CQB philosophy was “speed, surprise and violence of action.” We always wanted to launch rescue operations as close to the subjects as possible to maximize our tactical advantage and firepower. Were I to be attacked I needed to reverse that, to gain space and time, and rely upon my firearms skill to prevail.

I walked behind the car and thought for a second about retrieving the CAR-15, but did not because I had not been threatened and did not want to alarm customers. But suspicions would change to threats in seconds.

The Trap
As I turned the rear corner of the car, the man in the sweatshirt (“Subject One”) started walking briskly to my left in the direction of the pumps, never taking his eyes from me. There was no doubt in my mind he was trying to circle behind and very likely put me in an “L” situation with a confederate. In a CQB situation putting your opponent in the “L” or crossfire is the ultimate tactical advantage. It takes more time to write about this experience than the fractions of seconds of the actual events.

Most people would react by immediately getting to the safety of the car and locking the doors. That never entered my mind if an assault unfolded, as it clearly was, I did not want to be in my car trying to put it in motion when an aggressor approached my car, gun in hand—that would put me at the mercy of my attacker(s). With attackers in such close proximity, my weapon would not have served me well especially if two attackers approached from opposite sides of the car.

Fighting Back
My thought was to engage head-on, outside my vehicle. Chances of survival would be better if I neutralized the threat from a distance. I immediately opened the driver’s door and drew my weapon from the DeSantis holster that holds the P-35 cocked and locked. I positioned myself behind the open door and removed the safety. Gun now held low behind the door in both hands, I started turning my head back and forth between Subject Number One and in the direction of the dumpster. If there was to be a fight I wanted it on my terms and I wanted as much cover as possible.

Immediately Subject Number Two appeared from behind the dumpster, pulling a ski mask over his face as he moved directly toward me. I looked back and forth from Subject One to this new threat. I presented the Hi-Power with the dot of the front sight aligned on the chest of Subject Two. I thought I would engage Subject Two with a double tap and then engage Subject One with two shots and then re-evaluate.

I could not see the hands of Subject Two as they were hidden in what appeared to be a large pocket in the front of his sweatshirt. Things accelerated and our lives were unquestionably in danger: Subject Two threw on a ski mask as he quickly moved toward sme, there was no doubt that our lives were in danger.

This was to be a brazen assault for purposes unknown, we feared for our lives. The Browning has a two-stage trigger: I took up the slack and was about to engage. Subject Two was within 10 yards of my protected position when subject Number One screamed “No, No, No.” With that, both subjects whirled and sprinted back toward the dumpster and disappeared.

I locked and closed the door and told my wife, “If they come back at you, shoot them through the window.” I then made a wide arc to the left of the dumpster and observed three men, ski masks and Subject One running into the darkness.

The threat was over. We were lucky to have survived it. In discussing the event with Fort Worth P.D. and later with their training academy, they commented that I had in effect laid an ambush for the four who intended to ambush us.

Note: This article originally appeared in the May09 issue, but was an abridged version due to space constraint.