For as long as the firearms cartridge has existed there have been “favorites.” For varied reasons, shooters have soft spots for this load or that. There really is no right or wrong to this, it is simply a matter of personal choice. Some people drive Fords, some Chevys and still others a Toyota or BMW. 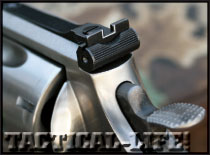 When it comes to the manufacture of firearms and subsequently the ammunition that is chambered in them, it all comes down to a matter of economics. Ammunition makers will continue to produce your favorite load until it is no longer economically feasible to do so. If shooters were clamoring for guns chambered in the .22 Rem Jet someone out there would still be making them.

Since the mid-1980s the avid shooter has had a strong interest in the 10mm cartridge. Unfortunately, many of the pistols made during the 1980s that chambered the round quickly fell out of favor for one reason or another. Fortunately for those that favor the 10mm, a few manufacturers have kept the cartridge alive by offering factory pistols in that flavor.

Smith & Wesson was one of the companies that really got the 10mm ball rolling back in the late eighties with the Model 1006 autoloading pistol. The large framed pistol has long since been discontinued. However, handguns chambering the 10mm cartridge can still purchased from S&W as the M610, a double-action revolver.

Particulars
The life of S&W’s M610 has been a unique one. The model has come and gone from the catalog. It seems every time S&W has discontinued it their customer base has demanded they bring it back. Remember folks, it’s all about economics. As long as shooters are willing to buy a gun, the manufacturers will make it.

At this writing, S&W’s is available in two configurations, one with a 4-inch barrel and one with 6.5-inch barrel. The standard finish is stainless steel and the grips are rubber with fingers grooves, ala Hogue.

The M610 is a DA/SA revolver. That is, it can be cocked manually for a single-action shot or fired from the trigger-cocking double-action mode. It is a large or N-frame revolver akin to the .44 Mag or .45ACP chambered wheelguns in the S&W line. Sights are the familiar front blade and fully adjustable rear. The handgun featured here has a 6.5-inch full-lug barrel. The front sight blade is black but interchangeable and the rear sight is fully adjustable for windage and elevation.

The large cylinder holds six rounds of 10mm ammunition. As the 10mm cartridge is a straight walled case each chamber of the cylinder has a lip to keep the round from sliding all the way through. S&W does include full-moon clips to secure all the cartridges together for easy loading and removal.

Moon clips are for convenience and are not required to fire the gun effectively. Those who use the M610 for a hunting tool are apt to go without clips so they can replace one or two spent cartridges without removing them all. Yes, you can safely fire .40 cartridges from the M610 and must use the moon clips to hold the shorter cartridges in place.

Range Chores
For my range testing chores I took along a number of loads for this handgun. As the 10mm cartridge can legitimately be classified as “magnum” I expected some decent velocities from the gun. The data I recorded with my Shooting Chrony was quite impressive. Every round save one far exceeded the 1000 feet per second (fps) mark, with most clocking speeds of better than 1300 fps. When you consider the M610 as a hunting gun, velocity does indeed play a role.

For instance, consider the 135-grain CorBon JHP load moving out at 1485 fps. Zeroed at 50 yards, the bullet drops a mere 1.8 inches at 75 yards and about 5 inches at 100 yards. For a 100-yard shot you simply hold at the shoulder and press your shot. As far as accuracy is concerned, I decided to bench the gun and zero it in at 25 yards. Almost every firearm will tend to group certain loads better than others. The M610 was no exception to this rule. In addition to 10mm loads from CorBon and Federal I tried out a .40 CorBon DPX load.

For my bench chores I simply used a field pack for a rest. Felt recoil was heavy but not severe. By that I mean there was definitely some flip to the big gun but the rubber grips provided plenty of purchase and padding to control it. The grips fill in the gap between the triggerguard and the frame preventing the middle finger knuckle-busting that used to plague magnum revolvers.

During my review of the M610 I was able to fire 50-plus rounds per session without any ill effect or wrist soreness. Those of you who have experience with large wheelguns know what I’m talking about.

As far as accuracy goes, I used the old gunwriter method of firing five shots and recording the best four of five. No, it’s not really scientific, but you get an idea of what to expect from the gun. Groups average around 2 inches at 25 yards with the CorBon 180-grain BCSP taking the nod with a 1.75-inch group.

Closing Thoughts
Fans of the 10mm cartridge should be pleased that there are still several ammunition companies producing quality factory ammo for the guns. Traditionalists who favor the big wheelgun have something to appreciate in the S&W M610. The sample that I had to try out was robust, well made, accurate and pleasing to the eyes.