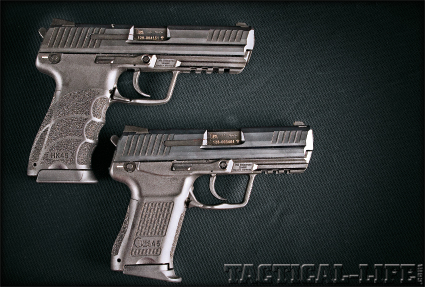 I’ve liked various aspects of Heckler & Koch pistols over the last decade or so. I have done quite a bit of shooting with the Mark 23 SOCOM and USP designs due to training of some units that use one or both. The most recent HK design that has really hooked me is their P2000. As soon as I shot this pistol I became a lifelong fan and remain so. In fact, my primary pocket gun is a P2000SK tucked away in a Don Hume pocket holster.

What is especially appealing about the HK45 and the HK45C is that their design incorporates the best features from all of the other recent HK designs. From the big Mark 23 “Offensive Pistol,” it retains the O-ring that allows consistent muzzle lockup without degrading reliability. As a result, consistent accuracy is achieved.

I got especially interested in the HK45 design a couple of years ago when I decided that I wanted to try all of the pistols competing for the now defunct JCP (Joint Combat Pistol) trials. Let me note here that the HK45 design was already in progress before HK felt the need for a pistol to submit to the trails, but the HK45 did become the HK design that would be submitted for JCP evaluation.

That entailed some tweaking of the design already in process to meet the various JCP bid specs. Some makers of pistols that were intended as JCP entries are offering the Dark Earth finished versions produced to meet the bid specs. HK did make some in dark earth, but information available indicates that the HK45 is only being offered in black.

Gun Details
Frame size was adjusted to be closer to that of the USP Compact size .45 ACP pistols. That adjustment combined with the use of interchangeable backstraps as with the P2000 allows the HK45 to be fired comfortably by many shooters who have found previous HK45s too fat in the hand. To be honest, I’m one of them. On my P2000 and P2000SK I use the most compact backstrap and have the compact backstraps on my HK45 and HK45C. Making the standard magazine capacity 10 rounds instead of 12 as on the larger HK .45 ACP pistols helps as well. Capacity of the HK45C is eight rounds and an extended 10-round magazine is available.

One quality feature that is retained on the HK45 is the safety/decock lever. I like having the option of carrying the pistol cocked and locked or hammer down for a DA (double-action) first round pull. When working in Europe, Africa and the Middle East, I carried a CZ75 and became used to having that option.

As a result, I am very predisposed to liking the HK45 safety system. Now, at the risk of contradicting myself, I also like the LEM (Law Enforcement Modification) trigger system, which is on the P2000 and P2000SKs I carry. HK45s may be obtained with the LEM system if one prefers.

The P2000 has very flat and ergonomic controls, which are good designs for ambidextrous operations. It might take an operator some time to adapt to the lever magazine release, but I can work it well with either the thumb or the trigger finger of the shooting hand. The ambidextrous slide release is a nice feature. One exception is during support hand drills. I always use the one designed for strong hand thumb operation. The hammer drop/safety is not ambidextrous. These controls are incorporated into the HK45 design.

Another useful feature from the P2000 is the incorporation of a Picatinny rail instead of HK’s proprietary rail used on the Mark 23 and USP. If one used both HK pistols and other models in the past, it was necessary to keep two light/laser types. The HK45 uses a Picatinny rail, which eases light/laser logistics substantially.

Other well considered ergonomic features are incorporated into the HK45. The triggerguard is large enough for operators who wear tactical gloves or some winter gloves. The slide is contoured and radiused, so that there are fewer surfaces to snag when drawing or to bite the hand when shooting. In addition to grooves at the rear of the slide, which allows a good grip for chambering a round, there are also front grooves. Sights are low profile 3-dot that show up quite well.

Basic disassembly is quite easy as all one has to do is pull the slide back an inch or so and push out the retaining pin/slide release. The recoil spring and barrel can then be easily removed. Another feature that is noticeable when basic disassembly is complete, is the recoil spring is fitted with a recoil buffer that aids in reducing felt recoil.

The groups are very good, they’re just a few inches low. Factory sights are regulated low with standard 230-grain loads for both models. It’s an easy fix by installing a lower front sight, but sometimes it takes time and effort to order a replacement front sight. For now, I just hold a little high, but I do need to get a replacement for the front sight. Both pistols performed well for drills requiring multiple shots.

“Man-With-A-Gun” targets were used on the range for various drills. One drill performed was three to the upper chest and two to the eye/nose triangle. Since I had to hold high to adjust for my sights, I went about an inch higher than intended and my shots ran up the “spinal column” pretty well. Over 75 percent of first round shots were with the hammer cocked and locked. The rest were with the first round DA. Both models have a pretty heavy DA pull, but the SA pull isn’t bad at all.

A friend of mine sent his two HK45s back to HK and had them converted to LEM, HK’s smooth DAO system. We went to the range and were pleased with their smooth consistent pull. I would be entirely satisfied using an HK45 LEM. Note that one of the bid specs on the JCP was that the pistol could be easily converted from DA/SA to cocked-and-locked to smooth DAO system. Many observers believe this spec was included specifically because many operators like this aspect of HK pistols.

Due to the combination of the comfortable grip and the HK45’s good positioning in the hand, recoil is surprisingly light, even with CorBon 200- and 230-grain and other full power loads. Reliability is excellent. Over half a dozen different types of .45 ACP ammunition have gone through both the HK45 and HK45C and everything functioned flawlessly.

Both guns are comfortable in the hand as the grips have been customized to my taste by switching out the backstrap. When shooting from the draw, my hand seems to position more naturally with the HK45C. That might be because I’ve been shooting with it longer and am used to it.

When I first got my HK45C and even a couple of months later the HK45 arrived, it was difficult to find holster makers working on HK45 holsters. One of my favorite holster maker did have models available for the HK45 and HK45C. A Summer Comfort by Galco Gunleather was perfect for the HK45C and their Concealable fit the HK45 like a glove. All carry and conceal my HK45s securely and comfortably.

Final Notes
Of the various Heckler & Koch .45 ACP pistols I’ve owned, the HK45C is the first one that I actually carry very often. I normally like night sights on carry guns, and on my needed-to-acquire list are night sights for the HK45C and HK45. The HK45 and HK45C are in .45 ACP. They are ergonomic, can be tailored to fit the hand, are accurate, and conceal well.

If one doesn’t like cocked and locked carry, they can be carried in DA mode; if one prefers cocked and locked they can be carried that way. There are a substantial number of HK fans that buy any pistol HK produces. In fact, most of my friends and acquaintances who own an HK pistol don’t own just one. It was interesting that when it came to the P2000 pistols that a lot of buyers were purchasing it as their first HK.

I have also seen some that are buying an HK45 as their first Heckler & Koch pistol. The pistol fits a lot of hands and a lot of missions. HK has a real pair of winners in the HK45 and HK45C. 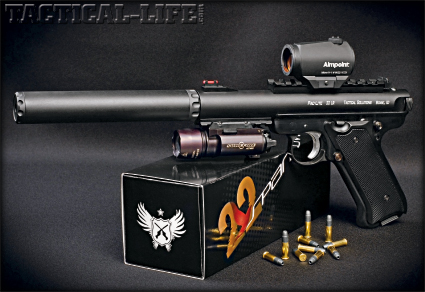