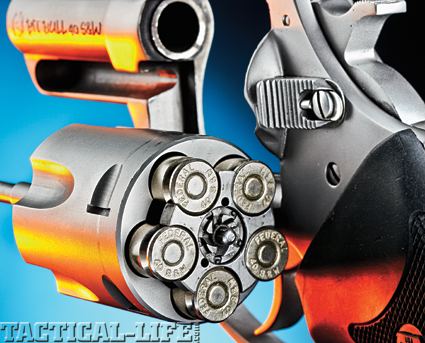 The Charter Arms Pit Bull is designed to fire the popular .40 S&W autopistol cartridge. Of note is the fact that its specially designed ejector system negates the need for “moon clips.” Photos by Steve Woods

Police departments primarily deploy pistols as sidearms, and usually in one of the three aforementioned pistol calibers. In addition to their duty pistols, police officers often carry backup weapons—usually a subcompact pistol or snub-nosed revolver. Often the duty pistol caliber is different from the caliber of the backup gun. Sometimes the differences can be significant enough to affect performance. Imagine shooting a .45 ACP duty pistol and then quickly changing to a .38 Special snub-nosed revolver while under duress. 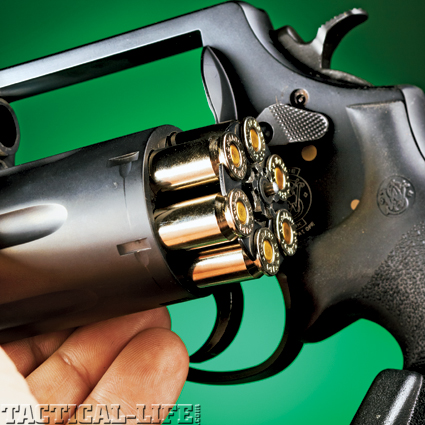 The Smith & Wesson Governor is an ideal self-defense revolver due to its uniquely adaptable nature—it’s designed to fire not only .45 ACP through the use of “moon clips”, but also to fire .410 shotshells and .45 Colt cartridges. Photos by Steve Woods

Yes, in a desperate situation a police officer or legally armed civilian will of course be thankful for any backup gun. Moreover, the analysis of life-or-death situations involving firearms rarely offers clear-cut universal conclusions. In the pistol/revolver caliber debate, however, consider the potential advantages of carrying a revolver chambered in a pistol caliber. While not an entirely new concept, several firearms manufacturers are currently producing pistol caliber revolvers to serve as backup guns or self-defense/concealed carry guns.