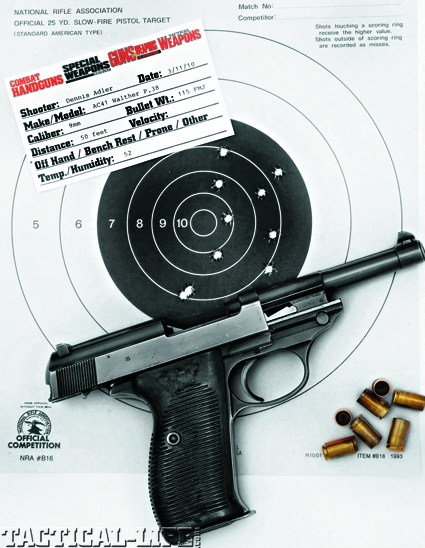 Adopted as the standard service pistol of the German Army in 1938, the prewar Walther P.38 was produced in massive numbers; over 1,000,000 during WWII.

The Walther P.38 is one of the most easily identifiable handguns in the world, and while it was introduced a little over 72-years ago, it remains amongst the most popular, collectible, and practical 9mm semi-autos ever designed.

Most people regard semi-autos as an invention of the early 20th century, but the first autoloaders were actually developed in the 1890s. To put that in context, when self-loading pistols first appeared in this country, around 1893, Buffalo Bill Cody’s Wild West Show was still touring America. By 1895 autopistols were being used by lawmen from town sheriffs to Texas Rangers, Pinkerton detectives, and yes, outlaws and cowboys riding the range on horseback. There are pictures to prove it.

Self-Loading Pistol
One of the very first production self-loading pistols, with a cache of cartridges stored within a self-contained magazine, was pioneered by an Austrian designer named Joseph Laumann, whose patent, it is believed, was signed over to the Österreichische Waffenfabrik Gesellschaft at Steyr in Austria, where the Schönberger-Laumann pistol was manufactured beginning in 1892. The Schönberger was succeeded in 1894 by the Mannlicher pistol, created by renowned rifle maker Ferdinand Ritter von Mannlicher. The Borchardt autoloader, designed by Hugo Borchardt and Georg Luger in 1893, introduced the toggle mechanism that would evolve into the renowned Borchardt-Luger pistol in 1898.

In America, firearms inventor John Moses Browning had already designed his first autopistol by 1899, which was built in Belgium by FN, and his designs for Colt would include that maker’s first autopistol, the Model 1900. Walther was just a little late to the party but by 1908 would develop it first autoloader, the Model 1. Principally the work of Carl Walther’s son Fritz, the Model 1 was the beginning of an entire series of small autopistols produced through 1920, which included nine different models.

In 1929 Fritz Walther made a giant leap ahead of his German competitors, Mauser and Luger with his introduction of a double-action autopistol, the Model PP. The Walther PP and compact PPK quickly became two of the most popular pistols, not only in Germany, but around the globe, and remain so to this day. While the PP and PPK were assuring Walther’s good fortunes, the company was developing yet another double-action semi-auto that would eclipse even the PPK in its serviceability for the military, the P.38.

Walther began work on the P.38 in 1935. It was first known as the Armee-Pistole for which German patents were issued in 1936. Eric and Georg Walther were awarded the patent protecting the breech-block, extractor, firing pin, and loaded chamber indicator. Fritz Walther and associate Fritz Barthlemens obtained the patent for the breech locking system [1]. The Armee-Pistole design, however, did not feature an external hammer, and this was the principal change between the first double-action 9mm Walther pistol and the Model MP, renamed the Heeres-Pistolen, or HP. This design was further tested and improved upon and in 1938 it officially became the Pistole 38 or P.38.

Taking a totally different approach than Hugo Borchardt and Georg Luger, the Walther P.38 featured a recoil-operated, locked breech design with a vertically tilting blocking bar that connected the short moving barrel and the slide. It also featured a short, top-open slide and, a first for 9mm military handguns, double-action operation.

The P.38’s design incorporated a manual safety lever, which also functioned as a decocking device. This safety lever, mounted on the left side of the slide, was used to hold the firing pin in place as the hammer was dropped, thus preventing a loaded cartridge from being discharged. It did not physically prevent the hammer from making contact with the firing pin, and as such, it has always been inadvisable to use the safety lever of early military and commercial P.38s as a decocking lever. The rationale, in theory and occasionally in practice, is that a poorly fit or worn firing pin will not allow the safety lever to properly hold it, and an inadvertent discharge could result.

Another advance in design, still used by Walther, was the loaded chamber indicator at the rear of the slide, just above the hammer. When a round was chambered the cartridge indicator pin projected from the back of the slide. Like the PP and PPK, the P.38’s double-action/single-action trigger and external hammer design allowed for the best possible combination of operating features. The P.38 was equipped with a large slide stop mounted on the left side of the frame, which along with the frame, was manufactured from steel and finished in either matte or polished blue. Perhaps the only awkward element of the gun’s design was the magazine release, located at the bottom rear of the backstrap, making the now commonplace one-handed release of an empty magazine impossible.

Production History
P.38 production began in 1939 but the first examples were not issued until April 1940, by which time Europe was engulfed in World War II. Ironically, the delay was not caused by the guns but by the availability of holsters. While the Walther P.38 became the standard German military sidearm during the war, the P 08 (Luger Parabellum) remained in service concurrently and military production continued through 1942 with some small-scale manufacturing continuing until the end of the war. It is interesting to note that the Walther Model P.38 was offered for sale in the US in the 1939 edition of the A.F. Stoeger catalog selling for $75 in caliber 9mm [2].

During WWII the P.38 was also manufactured by Mauser, from late September 1942 through April 1945, at which point the Mauser factory was occupied by the French [3]. Additional P.38 versions were manufactured during the war by Spreewerke GmbH, which had factories in Germany and Czechoslovakia. Parts were produced at captured arms factories including Fabrique Nationale (FN) in Belgium, where P.38 frames and slides were manufactured between August 1943 and September 1944. Total wartime production of the P.38 reached 1,144,000 by 1945 [4], thus they have always been in good supply and many prewar examples, such as this AC 41 and those manufactured throughout the war years, can be found in fine to excellent condition today.

Following Germany’s surrender in 1945 most of the country’s manufacturing fell under the control of occupying American, British, French, and Soviet forces. Nearly all of Germany’s industry had been laid waste to by Allied bombing, including the once magnificent Carl Walther factory in Zella-Mehlis, Thuringia, which was leveled to its foundation, leaving Fritz Walther and his brothers very much where their father had begun in 1886, working out of makeshift facilities and beginning almost anew. By the early 1950s and with the company reestablished in the city of Ulm, (in what was then West Germany), fortune smiled on Walther GmbH once more as production of new postwar versions of the PP, PPK and P.38 began in a variety of calibers, including .22 rimfire [5]. Postwar P.38s once again featured a 5-inch barrel and 8-shot capacity magazine, a new alloy frame for lighter weight, (approximately 28 ounces) and with the exception of special editions, a matte black finish [6]. Walther also introduced an aluminum-frame variant of the P.38, called the P1, that served as a standard issue sidearm of the postwar Bundeswehr (West German Army). A variant with a shorter barrel, designated P4, was also developed for police use.

Range Test
So how does the greatest Walther of the early 20th century stack up after seven decades? The feel of the P.38 in the hand is substantial. The action transfers more recoil than modern 9mm models like the Walther P99, making the latter easier to control, especially for double-taps or sustained fire, but overall function in the field is equivalent to most contemporary 9mm semi-automatics. With the P.38’s loaded chamber indicator, easily operated safety and slide release, and SA/DA trigger (the first shot can be fired either single- or double-action, the latter if the hammer is not cocked) the advantages offered by the P.38, compared to many modern 9mm models, including the Walther P99, are comparable, if not superior in some areas.

Reloading is the one area where technology and design innovations leave the P.38 in the past. The pistol’s magazine catch is on the bottom of the backstrap, in physical contact with the rear lip of the magazine. It takes two hands to drop the magazine on the P.38 and reload. This is interesting because Walther had already developed the PP and PPK, which used a frame-mounted push button slide release, a bit of design technology that unfortunately wasn’t or couldn’t be carried over into the P.38’s design.

Field stripping the P.38 is a simple task. The takedown lever (left side on the frame) is easy to use. The frame separates from the slides in one move and the barrel can be easily extracted from the slide. Cleaning and reassembly is a cinch making the P.38 as capable a sidearm for field use today as it was in the 1930s.

When all is said and done, the P.38’s design integrity remains equal in most respects to the latest 9mm semiautomatics. During our range test, conducted at 10 meters and at 50 feet, the P.38 delivered exemplary performance and satisfactory accuracy using Sellier & Belloit 115-grain FMJ ammo. Fired from a single hand Weaver Stance at a standard 50-foot slow fire target, two groups of 5-rounds each landed 10 rounds all within the black, with one in the 10, a pair in the 9, six in the 8 (with one only creasing the 8-ring) and one in the 7 ring. Held up against a B-27 silhouette all 10 shots would have been within the 10 and X rings. The best group of five rounds measured 2.2 inches center-to-center.

Final Notes
There is something to be said for the elegance of design characterized by the P.38. It has form and function, a design that can be recognized merely by its silhouette. It is as distinctive today as it was in 1938. Overall, it remains one of the most technologically advanced guns of the 1930s; reliable, accurate and comfortable to carry and fire. Interestingly, the same can still be said 72 years later. 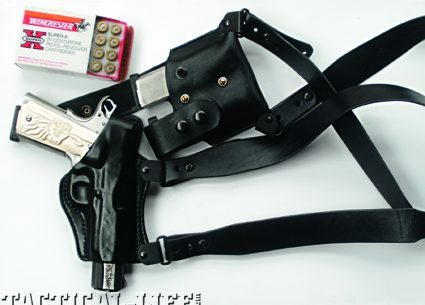 Adopted as the standard service pistol of the German Army in 1938, the prewar…