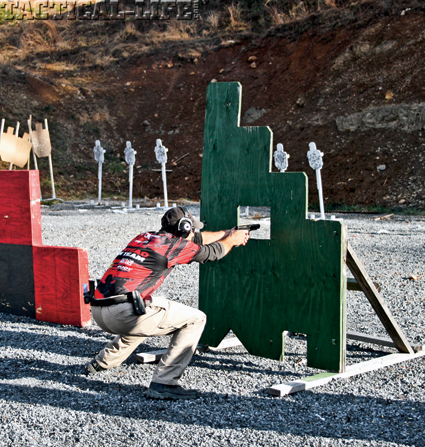 The opportunity to train with a world champion is not an everyday occurrence. Robert showed the blazing speed and impressive accuracy the class could aspire to develop.

Over the years I have been fortunate to attend numerous training courses hosted by some of the top instructors in the country. My focus has always been to improve my personal defense and concealed carry (CCW) skill sets. While I have participated in 3-Gun competitions, albeit on a limited basis, I have considered the crossover potential of match skills as only minimally applicable to CCW experience. I have read treatises on how the tactical world is not as forgiving compared to “gaming”—a dropped shot from an “A” zone is not nearly as fatal as taking a round to the chest. The debate continually rages over derived benefits gained from participating in “gun games” as being relevant to real world situations with many respected figures found on both sides of the argument. As with most topics the truth lies in the middle, especially after the topic gets heated and polarizes into die-hard camps.

Robert Vogel
I finally reached an epiphany about the topic recently after attending a two-day seminar by reigning IDPA SSP (HOA) and IPSC (Production Division) World Champion Robert Vogel hosted by Echo Valley Training Center near Winchester, VA. Robert has exploded onto the competition handgun scene over the last few years with 12 National titles in IPSC, IDPA, and USPSA sanctioned events. What really attracted me to Vogel’s course was the fact that he is an active LE officer and his championships are in competition divisions requiring a competitor to use basically stock, iron-sighted handguns. Vogel uses Glock handguns while competing. In fact, Robert often carries the same Glock 35 on SRT duty as he participates with in matches. In other words, Vogel’s shooting techniques can be considered applicable to CCW personal defense situations—there are no high-tech tricked-out custom handguns involved. Skills that directly relate to CCW practitioners needs are what serves Vogel best compared to specialized highly customized equipment that most of us neither have access to or care to own. Please do not mistake this as a diatribe against Open Class competitors or the great skills they possess—it is just not as related to the majority of CCW needs in my opinion. 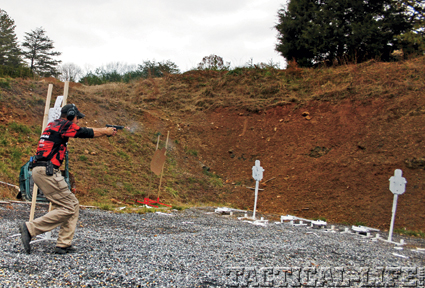 Vogel shot and moved so rapidly that he often had multiple empty cases in the air, while maintaining a level muzzle with the pistol before moving on to engage another target. 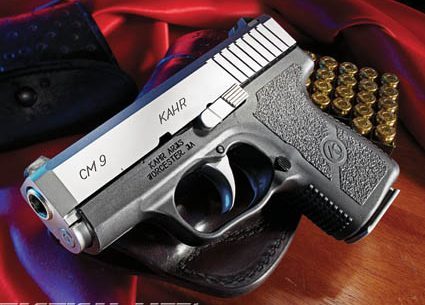 The opportunity to train with a world champion is not an everyday occurrence. Robert…