0
SHARES
35
VIEWS
Share on FacebookShare on Twitter
Reaching the century mark is a testament to the timeless aspects of John Browning’s design. While maintaining the celebrated fundamentals of the M1911, Remington takes it up a notch with the R1E.

John Browning’s Model 1911 has passed the century mark of service to the American military, and the gun industry celebrated that fact with several of their own renditions of this handgunning standard. Retooled to again make a handgun that hasn’t come off its lines in 90 years is Remington’s R1 series of G.I.-style .45 ACP pistols. 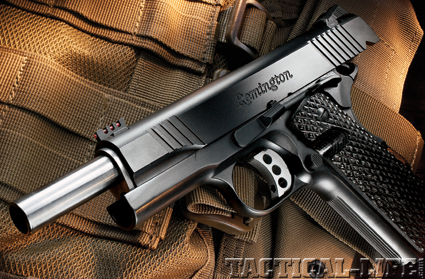 The new R1E features a 5˝ barrel and employs a traditional barrel bushing with no full-length guide rod system.

Throughout Remington’s early history, Eli Remington and his heirs gained their reputation by building military long arms. That tradition continued, with their business waning between wars. A fervent patriot, the elder Remington began ramping up factory size to meet production demands brought on by the Civil War, only to die and leave his sons to carry on their legacy. When the War Between the States ended, so did Remington’s fortunes. Marcellus Hartley recognized the value of selling ammunition outweighed the sporadic commerce afforded by selling long arms to the United States Army Ordnance Department, so he purchased the vestiges of Remington and combined the UMC (United Metallic Cartridge) with the gun-making giant. 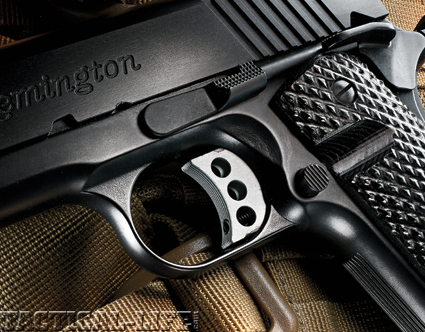 The R1E’s trigger broke cleanly and crisply with very little overtravel, which is the hallmark of an accurate and well-built semi-auto pistol.

Fast-forward about 40 years through the advent of smokeless powder and the creative genius of John Moses Browning to a time of global unrest. When America entered World War I in 1918, 10,000 troops were joining the fight every day. To equip these men, an array of small arms were manufactured in the preceding months. Included in the World War I military contracts (finally completed in 1925) were approximately 650,000 M1911 pistols. Approximately 21,676 U.S. Model of 1911 pistols rolled off the lines in Remington’s Ilion, New York, plant before the Armistice in November 1918. Today, the Remington-UMC-marked pistols are highly sought after collector pieces. Ironically, Remington’s sell-off of its typewriter patents in 1886 created the office machine company that became Remington-Rand, a manufacturer of World War II-era M1911A1 pistols. 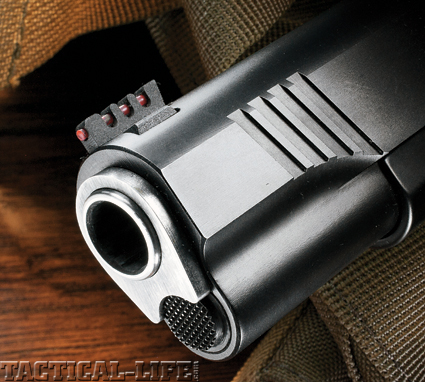