0
SHARES
20
VIEWS
Share on FacebookShare on Twitter
After 91 years, Remington is once again manufacturing a 1911—giving loyal customers the opportunity to round out their firearms battery with a well configured .45 ACP.

Texas is either gunwriter heaven or gunwriter hell. Gunwriters go to Texas so much it can get old. It’s where manufacturers often invite journalists to test new guns and gear. But I don’t mind it too much, especially when Alpine or Marfa, Texas is the destination. I like the open, brushy country, the rim rock and the hunting opportunities.

That’s where I was in March of 2010 with Remington to hunt aoudad, varmints and wild hogs with their R15 rifles in .223 and .450 Bushmaster. Linda Powell, Remington’s Senior Public Relations Manager, showed up with one of Remington’s new 1911 handguns—she knows how fond I am of 1911s. After a morning hunt we spent a little time shooting the pistol and then headed out after some wild hogs. I shoved the R1 in my waistband, almost out of habit.

There were several hunters, and all but the guides and I carried a rifle. It wasn’t long until the pack of Catahoulas—leopard cur hounds—had some hogs at bay. Nearing the action, one guide yelled, “Get that big hog down before it kills every dog we’ve got!” The huge hog was under a big cedar and was wound up like a cheated politician. From about 10 feet, I put a 230-grain hardball in its shoulder. That’s when all hell broke loose.
The hog burst out amongst us. Crimson Trace’s Travis Noteboom smacked the monster with two rounds from a .223. After Travis’ second shot the hog spun and came right for me. It looked like a locomotive coming on at full steam, but at breath smelling distance.

Chaos ensued. Other hogs, dogs and hunters were yelling, shooting and running here and there. So far cool heads and safe gun handling had prevailed, but I was having visions of being trampled and sliced up with tusks crawling with all manner of wicked bacteria. Thumbing the safety down on the R1 I thought of another Texas guide who almost lost a leg after a slashing from a wild hog. Front sight, squeeze and squeeze again—I double-tapped the forsaken swine at about 10 feet.

The charge was thwarted and the wad of muscle, hair, tusks and caked mud slammed back into the low growth cedar as one of the guides popped him with a .22 Mag. The engagement ranged on and several more hogs bit the dust. I shoved a full magazine in the R1, ignored the continuing mayhem and stood my ground in case Hogzilla decided to have another go at me.

But the hog had nothing left. Chalk the first defensive encounter with the new 1911 R1 up to Remington. The pistol might not have saved my life, but it for damn sure saved me from injury… or at least embarrassment. 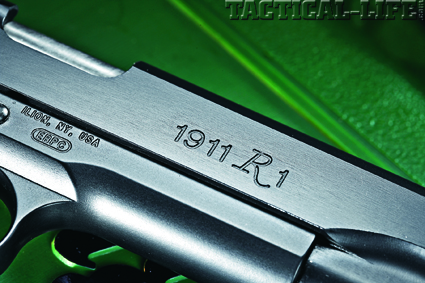 Remington’s marking on the slide might lead us to believe there could be a more radically enhanced R2 version. Regardless, expect to see a stainless 1911 R1 soon.

Some may be asking, “Does the world really need another 1911?” As far as I’m concerned, “Of course!” It’s like asking a cop if he wants another donut or if I’d escort Scarlett Johanssen to the Oscars. You might be tired of seeing one 1911 after another on the cover of a gun magazine but the pistol has earned all the attention it gets.

Conventional wisdom seems to be that a pistol has to be plastic to be effective or appealing to the masses. I carried a plastic pistol for 13 years as a cop. I never developed a relationship with it that you would write home to tell mom about and, when I went off duty, I carried a real fightin’ pistol—a 1911. 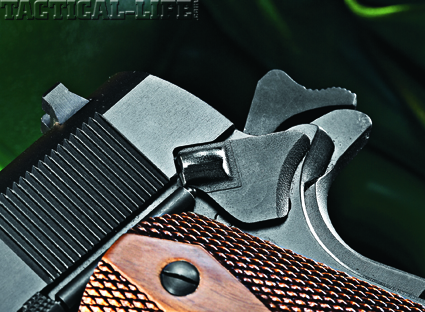 The 1911 R1 has the small thumb safety. Tacticians may not like this, but it is true to the original design and just as easy to operate.

Why would I say such a thing? 1911s have a safety that locks the slide, letting you shove the pistol in your waistband or holster without worry about the action cycling. 1911s are perfectly balanced; the slide weighs almost exactly the same as the frame. 1911s are single-action; the trigger pull is short and stays the same from the first to the last shot. Add in the fact 1911s have been proven in every major military conflict for the last century and you have the fighting pistol by which all others are judged. Everybody might be making a 1911, but that’s because a lot of folks are buying them.

After 91 years, that could be reason enough for Remington to start making the 1911 again. If not, consider that millions of Americans already trust a Remington 870 shotgun or Model 700 rifle. Why not give them a dependable handgun so they can round out their firearms battery while staying brand loyal?