A little over a quarter of a century ago the majority of Americans owning or carrying a handgun had far fewer choices than today, and the majority deferred to the same guns being carried by FBI agents and police detectives; snubnose revolvers like the Colt Detective Special, S&W Model 36 Chiefs Special, and similar small frame .38 Special revolvers. The limitations were accuracy and capacity, but the venerable wheelgun was still king among mainstream America, second only to the equally popular .45 ACP Colt Model 1911A1, then the top gun among U.S. military forces. But, by the mid-1980s things began to change.

Austrian Design
That same time signaled the beginning for an unorthodox European handgun chambered in 9mm. It bore the unusual name of its Austrian designer, Glock. The first model, the Glock 17, was developed for consideration as a replacement 9mm sidearm for the Austrian Armed Forces. Surpassing all competition in the military trials, the Glock was adopted as the standard duty weapon for Austria’s armed forces and law enforcement authorities. What set this gun apart from all others was its lighter weight, 17-round capacity, simple design, ease of use, and the fact that part of the pistol was made from polymer.

U.S. law enforcement agencies began testing and evaluating the innovative new pistol, and Glock’s star began to rise. A quarter of a century after Glock opened its U.S. facility in Georgia in 1986, its semi-autos have become the most commonly carried sidearm of American law enforcement—roughly 65 percent of the nation’s police and federal agencies carry 9mm or .40 S&W caliber Glock models. From the earliest days of the American West, right up to the present—what law enforcement officers like to carry, so too does the general populace. 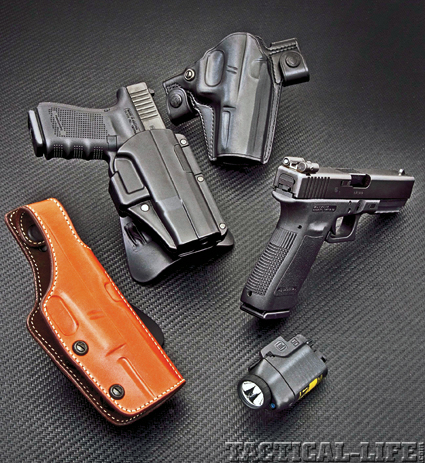 A variety of Glock and aftermarket accessories are available, including holsters, the Glock combination laser sight and tactical flashlight, and LaserLyte’s rear-sight mounted laser.