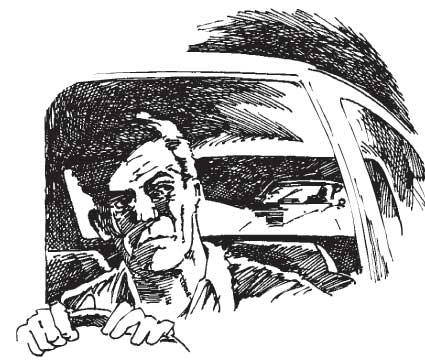 About 15 years ago my wife’s parents were visiting us from South Korea. At that time, we lived in California and we spent a few weeks showing them the sights, from LA to Las Vegas, and most of Northern California. One of the trips we took was to Yosemite to camp for a few days. The drive from the central valley to Yosemite was very beautiful, and the last part of the trip involved a very nice two-lane road cut into the side of the hills overlooking a river. On one side of the road was a drop-off of at least 50 feet to the river, and the other side had almost no shoulder.

As a habit, I packed my 9mm Browning Hi-Power in the van along with all of our camping gear. I always took it when traveling or camping with the family. I had read too many stories of bad things that happened to people while away from home, and I just felt that the added insurance of a pistol would help me defend my family. The Browning was stored in a cabinet in the van, just behind my seat.

Most of the drive was uneventful, if you can call traveling with a wife, three children below the age of 8, and the in-laws uneventful. The weather was near perfect and all seemed right with the world. I had always been observant wherever I went, mostly due to the fact that I had been a Reserve Army Infantry captain for about 7 years at that time. We did considerable training that consisted of moving, reporting and so on, and that gave me the habit of looking around and being aware of my surroundings.

We were on the narrow two-lane road and we had not seen any other cars for a long time. But, it was a weekday so it did not seem too unusual. In my rearview mirror I saw two cars coming up fast. Both were older vehicles, and as they got closer I could see that the first one had four guys in it and the second one had three. They were obviously traveling together and in no time they were on my bumper. There were a few places to pass but neither car tried to pass me. From my rear view mirror, it looked like the occupants were spending too much time checking out who was in our van. They could see in the big back windows of our conversion van, and they could see my in-laws. The first car then decided to pass, but it pulled alongside of us. It slowed and matched our speed. The guys inside spent several seconds looking through our side windows. It seemed to me that they were trying to see who was inside to assess the risk involved in stopping us, for who knows what purpose.

It was like a simple math problem; they were trying to decide if we were going to be an easy score. I knew immediately they intended to do us harm. As the first car passed us, I stared into their vehicle to let them know I was on to them. Surprise is a weapon, and I was not going to let them think this was going to be easy. At the same time, I asked my wife in a very pleasant, non-concerned voice, “Honey, could you reach behind me and hand me my pistol?” I did not want to alarm her or anyone else. Of course, she just looked at me and asked me, “Why?” I smiled again and just told her it did not matter why, just hand me the pistol. She did, but she was obviously curious as to why. As soon as I had the Browning in my lap, I felt much better.

By this time, the first car had sped around a corner, out of sight. The second car stayed glued to my bumper. So, let’s see, the odds are seven to one, but the Browning had 14 shots. I realized that I had to do something fast to signal that I knew exactly what was going on so I slowed to about 20 miles per hour. The second car still did not pass. As we came around the next corner, the first car had stopped in the middle of the road, some 200 feet in front of us. To say I was worried would be a vast understatement. My plan was to have everyone drop to the floor of the van while I engaged the nearest threat. If I could get a few of them before they knew what hit them, the rest might run away. To reduce the odds, I suddenly stopped the car in the lane I was in, as far to the right as possible. The van was a weapon I planned on using before the Browning. The car behind us stopped, and I could see a loud animated discussion going on inside between the three in that car. The front car sat where it was, not moving. After what seemed like hours, but I am sure it was seconds, the car behind us peeled out and passed us. The Browning was in my hand just below the window, and I was ready in case they stopped. But, they kept going and met up with the car in front. After a few seconds of what appeared to be another heated discussion, both cars took off.

My wife, in-laws, and children were oblivious to what had just taken place. They did ask why we stopped and I just said that I let a car pass us that was in a bigger hurry. The rest of the trip was fine, but as we came to each corner, I would slow down to make sure our friends were not waiting for us.

Later that evening, while all tucked away in the campground, I told my wife what had actually happened. She turned very pale. It all made sense to her then, and after that, she always insisted I carry a gun with us when we were out. Having the Browning in my hand made all the difference in the world. I knew that I could defend my family. We would not be defenseless victims.
—KS, Wisc.

About 15 years ago my wife’s parents were visiting us from South Korea. At…