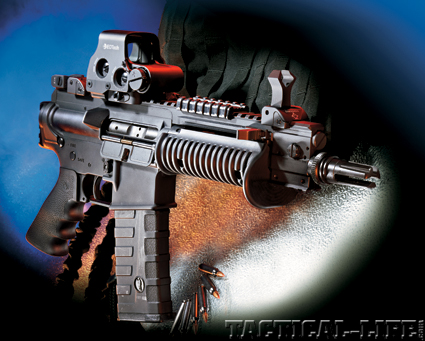 Pistol versions of the AR-15 are not uncommon, but the Piston Driven System (PDS) pistol from Rock River Arms offers a major difference. Due to its piston system, the PDS does not have a recoil spring tube protruding from the back of the receiver, which keeps overall length to just 17.5 inches. Another advantage of the PDS is that an owner who wants to pay the tax and register it as an SBR (Short Barreled Rifle) is ready to go after adding a shoulder stock (note that it is illegal to add a shoulder stock without registering the PDS as an SBR). 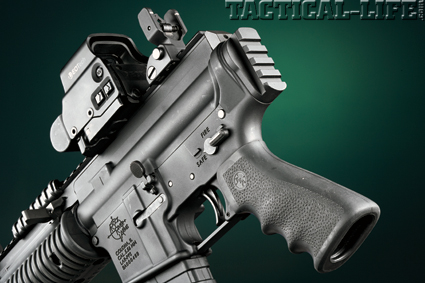 The comfortable Hogue rubber pistol grip is standard and the PDS features a rail in the back, which can be used to attach a single-point sling.

For those who want to keep the PDS a pistol, there are some advantages as well. Although 17.5 inches overall and 5 pounds in weight is still big for a pistol, the PDS is still relatively handy, and it does give its user a rifle-caliber weapon. For example, in Missouri where I live, anyone 21 years of age or older who may legally own a “concealable weapon” may carry it loaded in a vehicle. However, he or she may not carry a loaded rifle or shotgun without having a concealed weapons license. The PDS Pistol would seem to give another option as a legal car gun. Of course laws will vary from state to state, and should be checked before carrying any weapon.

Gun Details
For anyone familiar with the AR-15 or M16, the controls on the PDS are quite similar. The safety is the same lever, easily operable by the right thumb when in shooting position and the magazine release is in the same location. Also the same is the bolt release lever located on the left side and easily hit by the palm of the left hand when shooting right-handed. However, one aspect of operation is completely different. To operate the charging handle, one does not grasp the commonly encountered handle at the rear of the receiver.

An ambi, non-reciprocating charging handle is located at the front of the upper receiver.

Instead, a folding ambidextrous, non-reciprocating handle is located at the front of the upper receiver. For those familiar with the charging handle on an FN FAL Para model, this one is quite similar. I actually like the location as it easier to operate while holding the pistol in one hand and does not require the added space needed to pull back a standard AR charging handle. The Hogue rubber pistol grip is also of standard AR type pistol grips.

An “Operator Safety Flange” is incorporated into the injection-molded handguard. This flange serves to prevent the support hand from slipping forward in front of the muzzle, a useful feature on any short-barreled PDW (Personal Defense Weapon) type firearm.

The 8-inch chrome moly barrel has a 1-in-9-inch twist, which allows a wide variety of 5.56mm rounds to be used. A PDS-MD 1/2-28 thread muzzle device is supplied on the PDS Pistol, and this standard thread allows installation of a variety of flash suppressors. 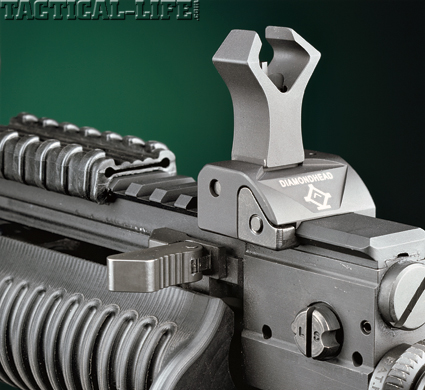 The Mil-Std-1913 rail accepts any number of accessories, like this BUIS from Diamondhead.

Optics
Since the RRA PDS does not come with iron sights, though just about any type of BUIS (Back-Up Iron Sights) designed for a Mil-Std-1913 rail will work, I decided to put an optical sight on the gun for testing. I felt that a 5.56mm pistol would be heavy enough and hard enough to shoot effectively that I did not want a very bulky sight, so I chose the Trijicon RMR (Ruggedized Miniature Reflex). Designed to hold up to hard military usage, the RMR seemed the perfect choice, especially since it is only 45mm (1.8 inches) overall and 1.2 ounces in weight. The model I used is the RM01, which operates on a 3V CR2032 lithium battery for over two years of continuous use. I find the 3.25 MOA Red Dot of the RM01 fast enough for close range shooting and precise enough for longer range shooting.

Trijicon also offers the RM02 with an 8.0 MOA of angle red dot. For those who prefer dual-illuminated models, Trijicon offers the RM03 with a 13.0 MOA amber dot and the RM05 with a 9.0 MOA amber dot. Instead of a battery, the dual-illuminated models use tritium and fiber optics. Each of the RMRs is readily adjustable for windage and elevation. Magnification is only 1X, but since I do not consider the PDS Pistol much more than a 50-yard weapon, I didn’t consider this an issue. 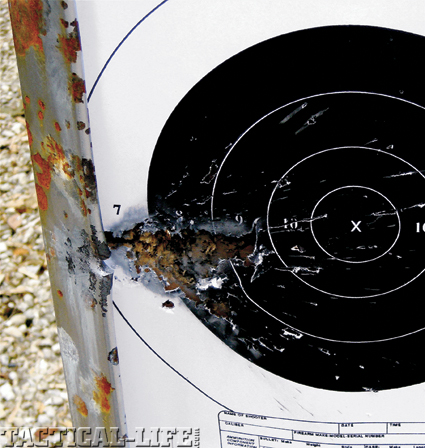 Penetration of the 5.56mm rounds from the PDS is evident here, as rounds used for sighting punched through this thick metal target frame.

Range Time
I took along some Guatemalan 55-grain surplus ammunition as well as a 50-round box of Black Hills 77-grain ammunition, which I have found to be extremely accurate 5.56mm ammunition. I did my preliminary shooting to get the RMR zeroed and to test the pistol’s handling with the 55-grain surplus ammunition. Even though the 55-grain did not have a penetrator as SS109 would have had, I got a good example of the penetrative advantages of a 5.56mm pistol when shooting groups at 25 yards to zero the optic. I was shooting so far low and left at the beginning that at least one round punched through the thick metal target frame. That frame was a lot thicker than most auto bodies these days.

Once the optic was zeroed, I did some shooting at 25 yards and found that I could get five-round groups of 4 inches, plus or minus. When shooting I had been pushing my support hand hard up against the Safety Flange, which was relatively comfortable. There was definitely more muzzle rise than when shooting an AR with a stock but no more than on most pistols. A friend who was shooting with me shot a better group and commented that he had found it worked better to bring the support hand back to the magazine well. I tried this method and found it worked better for me as well. In the past I have found that stockless rifle caliber pistols often work better with a sling affixed as one can push them forward against the sling when shooting to get a more stable shooting platform. I think I would consider a sling for the PDS if I were going to use it for an array of shooting tasks.

Once the RMR was on, I tried shooting in situations where I felt the PDS would be most tactically applicable. For example, its primary advantages as I saw it were penetration and stopping power combined with a high-capacity magazine, but at relatively close ranges. I put up silhouette targets at 15 to 25 yards and tried firing double and triple taps and strings of 5 to 10 rounds. Even shooting fairly quickly, I could keep my shots on the silhouettes. At even 15 yards, however, I would not have been confident to take a head shot.

Potential Roles
As I thought about the PDS, it occurred to me that it would make a very effective car gun for a driver who might face carjackers or other attackers whom he would like to quickly discourage at close range. Admittedly, my views are influenced by the fact that I train and work with security teams and also advise wealthy clients in some dangerous parts of the world.

Admittedly, the use I’ve described will not apply to most likely buyers of the PDS, but I think there will be a substantial number who will consider that it makes a useful car gun. I can see some interest in the PDS for those who ride an off-road motorcycle, bicycle, or ATV in areas where attacks have occurred upon on hikers, campers, etc. It should discourage attacks by two-legged predators and should be useful against dangerous four-legged ones.

Final Notes
Rock River Arms does quality work and the RRA rifles I own have always performed excellently so price is, to some extent, a function of paying for a well-made product. The PDS is, indeed, a well-made product, though as I have pointed out a specialized one. It will perform well within its own parameters, but remember it isn’t a rifle and isn’t a traditional pistol. 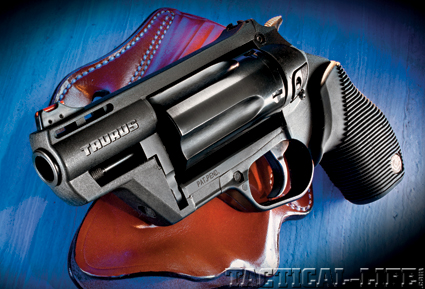