0
SHARES
4
VIEWS
Share on FacebookShare on Twitter
Rodd Redwing was a full-blooded Chickasaw Indian. A gifted athlete, he first appeared in Hollywood in Cecil B. DeMille’s The Squaw Man in 1930. Although Redwing had many small acting parts in Western movies and TV shows, he was a legend in Hollywood for his fast draw and gun handling skills. He became what was then known as a technical adviser.

His job was to see that the Hollywood actors handled their firearms correctly. Redwing also taught the Western stars how to draw their SA Colt fast and safe. His credits include such great Western movies as Vera Cruz, Shane, High Noon, One Eyed Jacks, The Tin Star and Shalako.

Realistic shooting scenes were pioneered by Redwing. He first showed the violent impact of a .45 Colt cartridge. While filming Shane, Redwing attached wires to a chest harness worn by Elisha Cook, jerking him violently backward when he was shot down in the street by Jack Palance.

A professional exhibition shooter, Rodd splattered thousands of candy Neco wafers with .22 LR single-action revolvers and Marlin lever action rifles. His most amazing feat was to hold a throwing knife at shoulder level with his gun hand, throw the knife at a target, and with the same hand motion, continue down and draw a SA revolver and fire a shot. The hurtling knife would just happen to always stick in the edge of the bullet hole! Now I know that this was a magician’s trick, but it required exceptional gun handling skill and hand speed to get that shot off before the knife stuck in the target, as well as being a skilled knife thrower.

He also taught his students to fire two very fast shots with the SA sixgun by thumb cocking and firing the first shot just above the holster, and then raking the hammer spur across two cartridges placed above and in front of the holster to cock the revolver for the second shot. Glen Ford performed this trick in The Fastest Gun Alive.

With the huge popularity of the “adult” TV Western series during the 1950s and 60s, Rodd promoted the new sport of Fast Draw, sponsoring and coaching his Thunderbird Fast Draw Club. Redwing marketed a fast draw rig of his design, which had corset stays to shape the holster rather than the steel lining that was popular at the time. He was a celebrity judge at the 1959 Colt‑Sahara Hotel National Fast Draw Championship and appeared professionally at the same championships in 1960, 1961 and 1962.

Colt Firearms Company was the major sponsor for these Vegas Nationals. Fred A. Roff Jr. was President of Colt at the time, and was present at several, if not all, of the Colt-sponsored National Fast Draw Championships, and he undoubtedly knew Redwing. 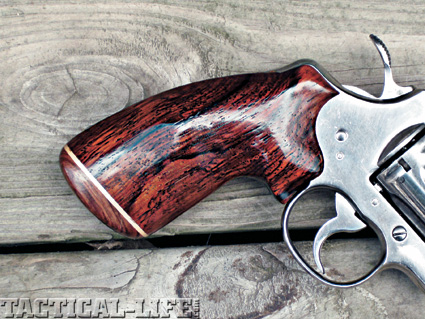 The author replaced the factory target grips with these Hogue Monogrips without finger grooves.

Redwing co‑authored with John Lachuk an article titled “Practical Combat Shooting” in a 1964 annual publication, The Gun Illustrated. The photographs accompanying the article showed Redwing on a police shooting range, point shooting a Colt Python 2.5-inch barrel revolver. He was demonstrating the classic deep combat crouch with the Python a forearm length in front of the hip with the offside arm angled upward across the chest to protect the heart. This was the combat fast draw technique taught at the time to FBI agents. In the text, Redwing described the new Python as, “The new 2.5-inch barreled Colt Python .357 Magnum is a compact fist‑full of pure dynamite—completely controllable with full charge ammo.”

Redwing was associated with Stembridge Gun Rentals, the largest and best known firearms rental company in Hollywood. It was Rodd that designed the large loop rapid fire modification to the 1892 Winchester carbine used by Chuck Connors on TV’s The Rifleman. While visiting with Al Frisch, the owner of Hollywood Guns and Props, he told me of having a Redwing inscribed revolver that came from Stembridge. It turned out to be a 2.5-inch barrel special presentation Colt Python. After some horse trading, I was successful in adding this rare Python to my personal gun collection. 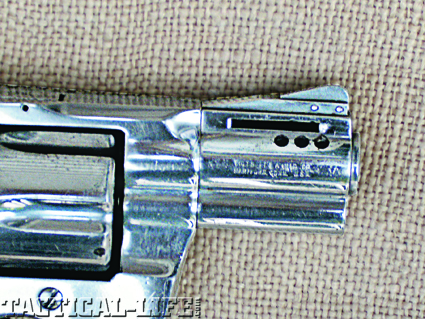 Gun Details
Sending a check to Colt Firearms brought a factory letter authenticating that this Python left Hartford with a 2.5-inch barrel, blue finish in a one gun shipment direct to Rodd Redwing at his home address on June 4, 1964. Setting this Python apart from all others is the factory inscription on the top strap, which reads “To RODD REDWING From FRED A. ROFF JR. President COLT’S”.

Although this special Python left Colt in a blue finish, Rodd had modified it by drilling three circular ports on each side of the muzzle to reduce recoil, and then had it chrome plated. Being shipped in mid-1964, this is most likely the Python that Rodd is shown shooting in the article in The Gun Illustrated magazine. Showing signs of a lot of use when I received it, Redwing’s Python was badly out of time. A quick trip to Cylinder & Slide and their pistol smiths had it timed perfectly.

In the article, the Python had custom combat grips of an unknown maker. However, the presentation that the Python arrived with was its original checkered walnut target style factory grip with Redwing’s name written in ink on the inside. I decided to replace the bulky factory grips with current state-of-the-art combat grips. I selected striking cocobolo Hogue Monogrips without finger grooves for the Redwing sixgun. I prefer finger grooves for slow fire target shooting, but for a maximum speed draw, it’s best not to have them. I am confidant that Redwing would have preferred no finger grooves for his special double-action combat revolver. 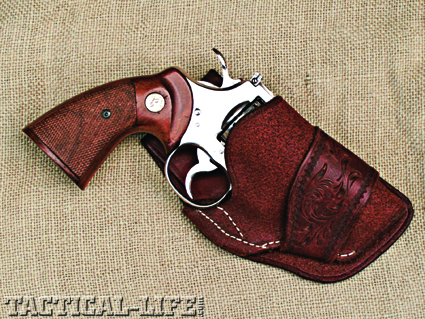 Shooting Impressions
Not waiting for a trip to the range to test fire the Python, I rushed to my basement Fast Draw range and fired it with wax bullets powered by Remington 209-grain shotgun primers. While short barrels with iron sights do not work well with my 60-year-old eyesight, I managed to put 3 out of 5 shots in one ragged hole, off-hand at 10 feet. Getting out to the gun club, I test fired the Python with Federal 158-grain .357 hollow points, off-hand at 15 paces with 5 shots in 4.25 inches, which is good enough for consistent hits on my favorite soda can plinking targets.

The Python has a reputation for a smooth and light action out of the box, and this Redwing Python, after thousands of shots is buttery smooth.

I wonder what holster Rodd used? It would have been open top for a fast draw. The photos in the previously mentioned magazine show him using a high ride strong side Threepersons style holster. I made a Redwing style Fast Draw holster for it. However, I have a photo of Rodd in Andy Anderson’s “Gunfighter” holster shop. He is wearing a Anderson high-ride steel-lined Fast Draw rig with a Colt .45 autopistol. It may be that a similar rig for the Python will make the perfect rig to complement this very special Colt Python.