Today’s .380 ACP pistols may be lighter and more compact, but they lack the deadly stopping power .357 Mag—or even .38 Special—revolvers can deliver. Right now, .380 pistols are enjoying a resurgence in popularity, but people serious about self defense unanimously prefer guns with a lot more punch, typically guns that shoot rounds like the .357 Mag.

Gun Details
The Rossi has a stippled rubber grip that’s wider and fills the hand a little better. In addition to feeling good in your hand, the broader grip helps minimize recoil. That’s a plus when you fire full-house .357 Mag or .38 Special +P loads. 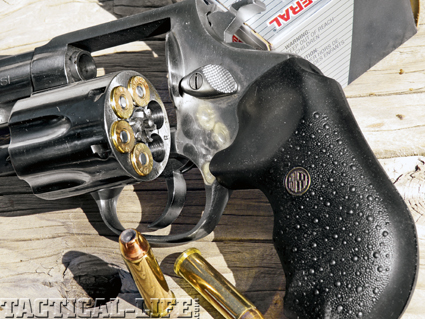 Despite its compactness, the Rossi Model 46202 can fire full-house .357 Mag rounds (in addition to .38 Special). It also holds six rather than the customary five rounds often seen in snubbies.

The stainless steel Rossi I’ve been testing is a compact, well-mannered handgun. There’s a little rotational play in the cylinder when the gun isn’t in battery, but this all but disappears when the hammer is cocked. Lockup is comfortingly tight. 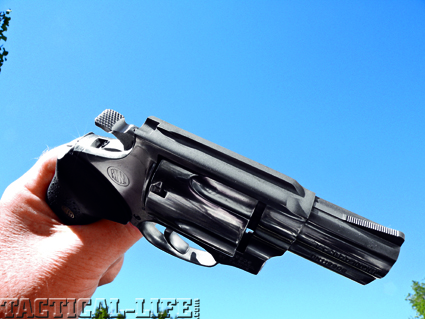 The topstrap of the revolver features a non-reflective matte finish to aid shooting.

The hammer itself features a generous, sharply checkered spur for positive handcocking when the gun is to be fired single-action. The firing pin is attached to the face of the hammer. An internal hammer block prevents the firing pin from contacting a cartridge primer. The hammer block remains in place when the hammer is down, preventing accidental firing, even if a loaded gun is dropped. The block is withdrawn when the hammer is manually cocked. If the revolver is dropped in this condition, it’s possible the hammer could be jarred loose and fire the gun. The revolver can’t be cocked until the cylinder is fully closed and latched in place.