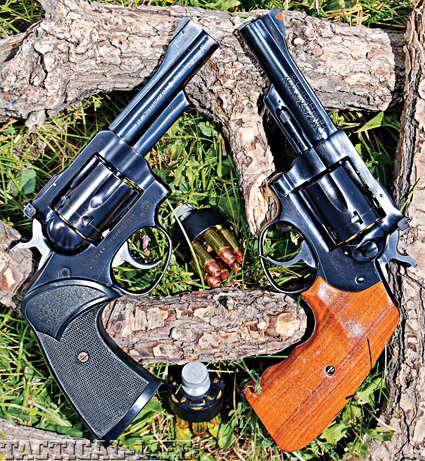 Considered a bit of a “backwood’s relative” by traditional-minded revolverists, the humble .357 Mag Security-Six that founded Ruger’s DA revolver line-up was an excellent buy in 1971, and still is today — if you can find it. Author’s 1975 duty gun at left, later 1981 version at right.
Comment(s)

In 1971, when Sturm, Ruger & Company formally introduced the Security-Six, it was a groundbreaker in several areas. It was Ruger’s very first double-action revolver, noteworthy in itself for a company best known for single-actions in the revolver world, and its construction challenged the traditions of DA revolver making long established for well over 70 years.

Gun Details
In the first place (like other Ruger firearms), the gun was built around a cast frame, not a forged one. That was scandalous enough in itself to raise controversy (and spark the “forged versus cast” wars that still rage today), but there were other notable differences that drew immediate attention. Designed with a solid frame, the Security-Six had no sideplate for internal access to its action parts and required no tools to disassemble beyond a screwdriver to remove the grips—very different from older DA revolvers. The trigger group dropped out the bottom of the frame as an assembled unit, infinitely more convenient and much less prone to small parts loss during cleaning than other makes. The hammer was powered by a nearly unbreakable coiled wire spring, instead of an older flat-type spring that could (and often did) either break or lose tension over time, and the only highly specialized instrument needed to remove it was a paperclip.

The frame-mounted firing pin wasn’t entirely new, and neither was the transfer bar ignition “safety,” but they were still considered major innovations by a modern “name-brand” manufacturer. The cylinder thumbpiece was also unique, being neither a forward pusher along the frame like the Smith’s equivalent, nor a backward puller like the Colts’. It simply depressed into the frame. Fully adjustable sights were standard on the Security-Six, fixed sights were used on the subsequent Service-Six and Speed-Six versions that followed.

And, the Security-Six was built from the ground up for longevity in key areas to enhance its lifespan with the .357 Mag loads carried in police holsters across the nation. Without being constrained by decades of tradition and customer expectations, Ruger engineers were free to retain the familiar profiles and functions of a double-action revolver, but take a different path in achieving those functions. No sideplate meant a stronger frame without the danger of warping a plate during removal by inexperienced hands. Locking notches in the cylinder were offset between chambers, instead of being cut into the thinnest section of the outside chamber walls as many others had been for generations, leaving additional steel to resist a blowout on a hot charge. Engagement areas in the cylinder/crane assembly were beefed up, whereas with older makes limited to maintaining familiar dimensions and mechanisms it was more a matter of enhancing heat treatments to try to achieve the same result. The thick Security-Six topstrap won no awards for its aesthetics, but soon gained a reputation for not stretching. The barrel’s forcing cone held up through the battering of hotter .357 Mag loads in development for law enforcement, and the gun rarely went out of time as many Smiths and Colts tended to do with extended shooting. 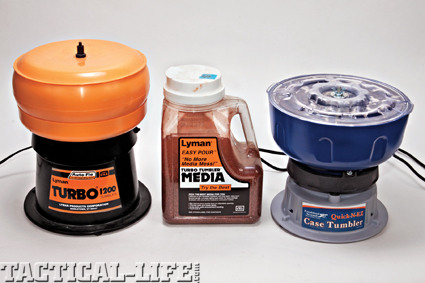 In 1971, when Sturm, Ruger & Company formally introduced the Security-Six, it was a…