0
SHARES
868
VIEWS
Share on FacebookShare on Twitter
The Ruger LCR in .357 builds on the notable strengths of the LCR platform—namely innovative design and cutting-edge materials—to take performance to the next level.

It is difficult to compare the Ruger LCR .357 Mag with any other snubnose magnum revolver, because there isn’t any other revolver like the LCR. The new .357 model is compact (6.5 inches), lightweight (17.5 ounces), and, like the .38 Special +P version introduced in 2010, has literally rewritten the book on revolver construction.

While the LCR is still fundamentally the same “concept” as Samuel Colt’s 1836 patent for the revolving cylinder pistol, the Ruger is as novel in 2011 as Colt’s 5-shot Paterson revolver was to a flintlock 175 years ago. The LCR (Lightweight Compact Revolver) began with a clean sheet of paper, one on which Ruger’s design and engineering team drafted a totally new way to assemble a revolver. The first LCR model (.38 +P) has, within its first year of production, become one of the most popular concealed carry revolvers on the market. The .357 Mag version makes this great little gun a pocket powerhouse that gives up little to its .38 Special counterpart in terms of weight or recoil management.

Gun Details
The LCR .357 at 17.1 ounces is only slightly heavier than the .38 special version, which tips the scales at 13.5 ounces. The additional weight goes into the .357 barrel, cylinder, front latch inner spring, stainless steel (rather than aluminum) frame assembly, cylinder/crane assembly, center locking pin and cylinder sub-assembly, all of which have been strengthened or modified to counter the greater pressures and recoil of .357 Mag cartridges. 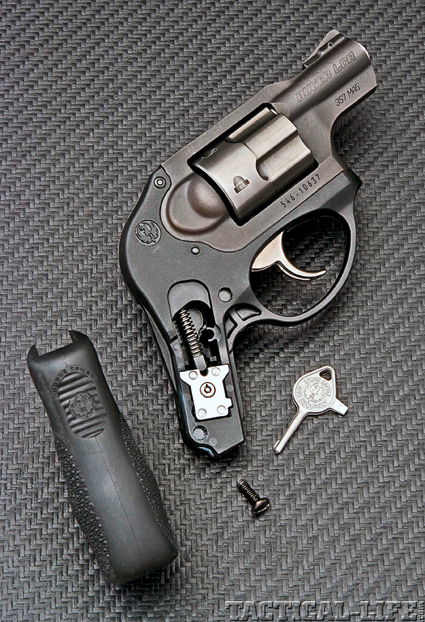 The large Hogue Tamer rubber grips, which are secured to the Fire Control Housing grip peg by a single screw through the base, fill the hand without becoming a burden for concealed carry, even in a pocket holster. The contoured Hogue Tamer and LCR frame design give the strong hand plenty of gripping area, a thumb rest, and enough triggerguard to allow a solid two-handed hold. The fully shrouded hammer also streamlines the Ruger for trouser or jacket pocket carry with no edges to catch on fabric. 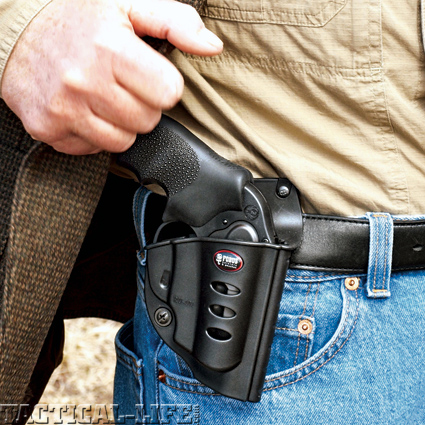 The author tested the LCR .357 with the Fobus RU-101 molded paddle holster. It proved to be a stable and secure way to carry the little snubbie.

Concealed Carry Rigs
With concealed carry as our primary objective for the LCR, I first tried a series of pocket holsters. The best fit was the DeSantis Nemesis and Super Fly, both of which are available for small-frame revolvers, and work particularly well with the LCR, making it easy to carry even in the front pocket of a pair of jeans. Due to the gun’s unique shape and deep, curved triggerguard, most holsters that would accommodate an S&W J-Frame sized gun won’t work with the LCR, however, the Fobus RU-101 molded paddle holster designed for the Ruger SP-101 happens to ideally suit the LCR. I gave this rig a full test for ease of carry, positioning, speed of draw, and re-holstering and the Fobus worked seamlessly, providing a firm (and audible) lock on the gun when holstered, and easy release on the draw. Galco offers a dozen different holsters for the LCR, which, along with the Fobus RU-101, are all available online through shopruger.com. For quick reloading, a standard HKS 36 speedloader works well with the LCR’s cylinder, though you have to be diligent in properly positioning the loader, as space is at a premium against the Hogue rubber grips. The HKS speedloader is still a lot faster than either a speed strip or loading one cartridge at a time. 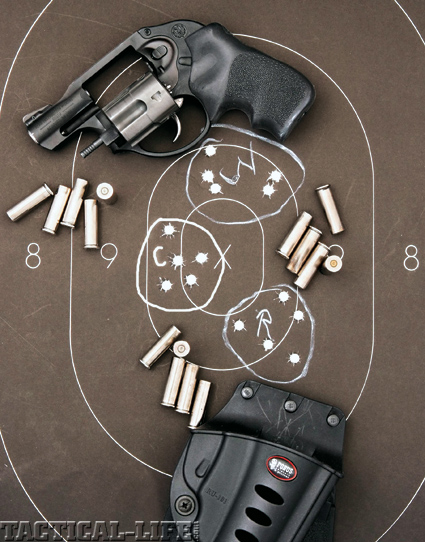 Author test fired three brands of .357 Mag with all three delivering roughly the same accuracy at 7 yards from the 1.88˝ stainless steel barrel. All groups measured under 2˝ center-to-center in the center of a standard B-27 silhouette target.

For a small, lightweight revolver the LCR is well balanced with a long but very smooth trigger pull that averaged 10.8 pounds. The trigger mechanism is designed to generate less friction than traditional DAO revolvers, thereby mitigating some of the resistance (stacking) generally experienced in firing compact double actions. The LCR’s deeply curved, skeletonized trigger has a pull measuring 0.88 inches.

The gun is equipped with a standard notched rear sight channel and a ramped front sight. This proved adequate under most conditions, but black on black sights, especially with a U-notch rear, are hard to acquire when firing against a dark background or in low light situations. Ruger also offers an optional ($59.95) tritium standard dot front sight, which would be a wise addition when carrying the LCR as a defensive handgun. 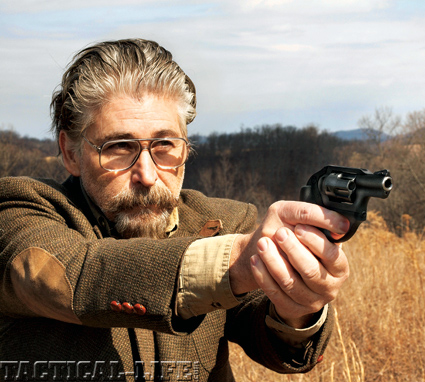 Test ammunition consisted of Winchester 158-grain JSP (jacketed softpoint), Remington Golden Saber 125-grain. JHP (jacketed hollowpoint), and CorBon 100-grain. Pow’RBall. Two of the three brands clocked closely together on our ProChrono chronograph; 1,490 fps for the Remington, and 1,450 fps for the CorBon. The heavyweight 158-grain Winchester JSP came booming out of the Ruger’s barrel at a consistent 1,660 fps, while delivering the most jarring recoil, but consistent accuracy. The CorBon Pow’RBall was the second hardest hitting, with the most manageable being the Remington JHP.

Recoil with the .357 Mag, compared to .38 +P, is definitely more demanding of the shooter. I slipped in a load of CorBon DPX .38 +P after about 50 rounds of Winchester .357 and it was like shooting a .380 ACP in contrast. Given the LCR .357’s additional 4 ounces of weight, loading the .357 with the hottest .38 +P cartridges would make this a more manageable handgun than the lighter-weight .38 caliber LCR model. It’s not much to give up 4 ounces when you are already dealing with such a compact revolver, and the option to use either .38 or .357 Mag is worth the $50 bump in price. 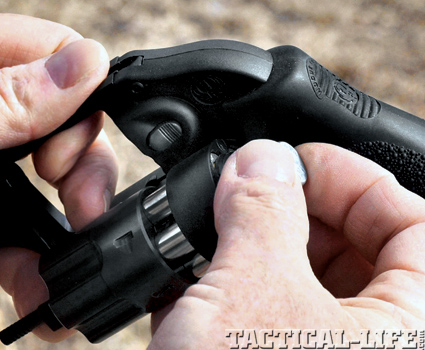 For quick reloading, a standard HKS 36 speedloader worked well with the LCR’s cylinder.

Final Thoughts
The idea of concealed carry is to pack as much gun as is practical. For many who favor a wheelgun over a semi-auto, the choices in compact (2.5-inch or shorter barrel length) .357 Mags have generally been S&W J-Frames like the Model 640 Hammerless, which weighs 23 ounces empty, and is comparable in most dimensions to the Ruger, as is the similarly designed Taurus 650 Hammerless. The only comparable lightweight S&W is the Scandium Alloy Frame Model 340 PD, which is only 11.4 ounces empty (less than the .38 caliber LCR). None, however, come close to the LCR for design innovation and recoil management, a most key element when firing a .357 Mag JHP out of a 17.1-ounce handgun with a barrel that is only 0.25 inches longer than the cartridge!