William B. Ruger, Sr. was a man thoroughly entrenched in the past—not only because he loved it, but because he lived it. Born in 1916, he grew up during what may be considered to be one of the greatest eras in our history. In 1949, along with his friend and business partner Alexander McCormick Sturm, he established Sturm, Ruger and Co., and introduced a .22 caliber semi-auto that would become an American icon. 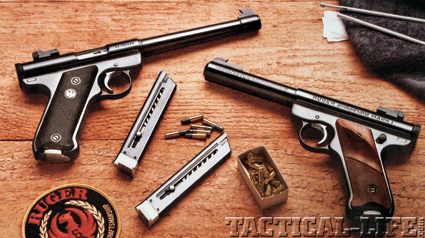 The Mk I was offered in two standard barrel lengths, 4.75 inch (above, right) and 6 inch (above, left), and used a nine-round spring-fed magazine. The guns utilized a welded two-piece stamped-steel frame; a machined steel barrel (six grooves, right-hand twist); and a tubular steel receiver with a cylindrical bolt. Photo courtesy Sturm, Ruger

The original Ruger Standard was a small, stylish .22 caliber target pistol that has become the first gun of more Americans than almost any other in modern times, and remains one of the most popular target pistols in the entire world. “It’s been the first pistol fired by many a lad,” Ruger told the author in 1994, “and like so many family heirlooms, a Ruger .22 is often handed down from father to son.”

Although the company he founded has been a technological innovator for over half a century, the majority of Ruger’s pistols, rifles and shotguns have been inspired by classic firearms of the past. Ruger once told me, “There is no one who can design a firearm without reference, without some connection to an earlier design. Just as engines, fuels, and aerodynamics help define what an automobile will look like, the dynamics of a bullet and how it works, defines a firearm. We’re using ammunition exactly as it was 125 years ago. We may have advanced the state of the art, but we are not creating a whole new technology.” 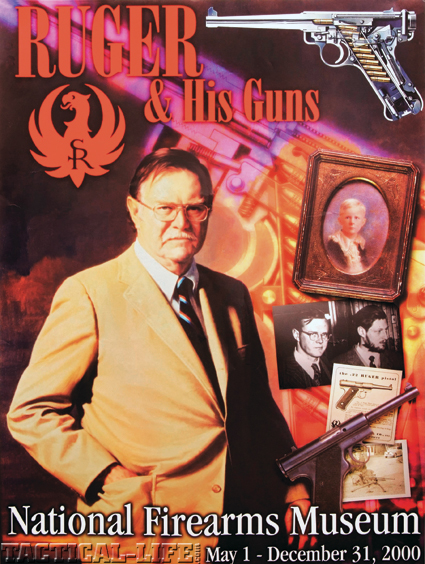 Above is a commemorative poster for the Ruger Exhibit that was held at the National Rifle Association’s National Firearms Museum in 2000.