Back in the mid-1980s when Ruger introduced their first centerfire semi-autopistol, the double-action 9mm P85, it opened the door for a succession of other developments that followed. The P85 had one or two birthing pains that led to the re-vamped P89, which was well received by Ruger fans and others who liked the performance that came with the reasonable price tag. Both pistols were designed with the typical Ruger approach that merged function, durability and efficient manufacturing processes. So much so, that there was some law enforcement interest among those who floated their own hardware because the guns were relatively affordable on a cop’s salary. But they were sizable platforms, big and blocky, and some potential buyers passed for that reason. 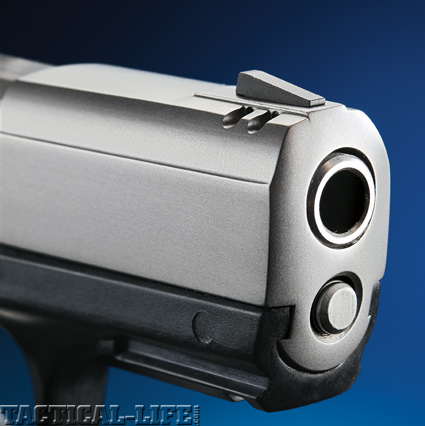 The streamlined “snout” on the P-Series pistols now carries an accessory rail under the barrel for lights or aiming devices.

Other calibers and variations followed, still on the large side, until Ruger brought out the even more refined P93 and P94 models. With rounded contours, shorter barrels, and a trimmer package, the new P-guns were in my opinion more visually appealing, felt great in the hand, and created a little less bulk on a duty belt or in the hand. Function remained a given, pricing was still great, and the guns were built to last. What would come next would be a significant change to the series. Whereas previous models had featured alloy frames to keep down weight, a new offering would employ a modern polymer frame. This pistol, the P95, took the series to the next level.

Gun Details
I covered the P94 when it first came out and liked what I found. It was a great improvement over the earlier Ruger pistols in handling and looks. The P95 now carries on the same overall profile with the rounded Art Deco snout somewhat reminiscent of the great streamlined locomotives of the 1930s, white 3-dot sights with pinned front and dovetailed rear, huge ejection port, beefy external extractor, slide-mounted ambidextrous safety/decocker, rowel-type hammer, ambidextrous magazine release levers, smooth trigger and 15-round magazine (or 10-rounders for those governing bodies that reject anything higher). The frame, which Ruger describes as a glass-fiber reinforced polyurethane material, has been updated from earlier 95s with a pebble-grained grip texture and an accessory rail up front that was added in 2006. Otherwise, it’s essentially a P94 with a non-metallic frame, and if you knew those pistols you know this one. 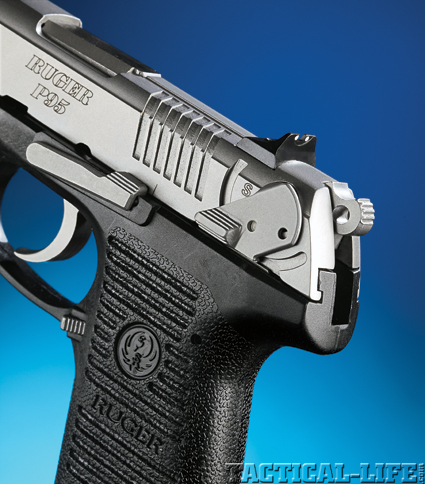 The P95’s no-snag three-dot sights are easily visible, and the slide-mounted safety/decocker is shown engaged in the down “safe” position. Ambidextrous controls are lefty-friendly, with decocker and magazine release levers identical on both sides. 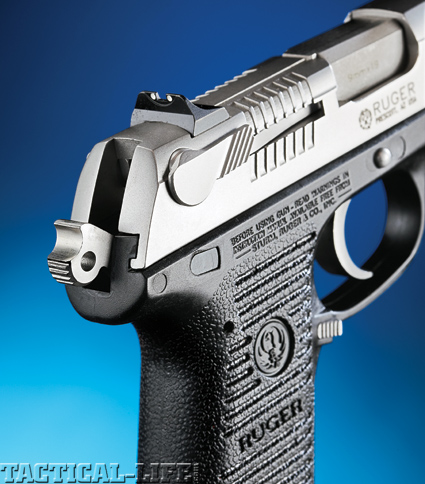 The P95’s ambidextrous controls are lefty-friendly, with decocker and magazine release levers identical on both sides.

Inside, the P95 uses a passive firing pin safety that blocks the pin from going forward unless the trigger’s pulled. That, in conjunction with the thumb safety that physically cams the firing pin forward into the rear of the slide where the hammer can’t touch it when on safe (lever down) and when decocking, tends to cause the pistol to not make loud noises unless you want it to. Most buyers appreciate that.

The P95 is not built of conventional materials in a conventional way. Ruger says the gun, in both blue slide and stainless slide versions, remains in the line-up because it’s a “price point pistol”—meaning it’s directed at a certain market who wants a decent gun that doesn’t require selling blood to finance. The frame is polymer, the slide, barrel, hammer and trigger are cast, and the gun wouldn’t know a drop forge from a wine press if it saw one. Don’t haul out your cross and holy water, though, none of this is anywhere near being a fatal flaw. There’s no company in the firearms industry today with more solid casting experience under its belt than Ruger, and they know how to design a gun around the properties of casting technology. In the frame, for instance, the 95 is one of the very few polymer-framed pistols you’ll see that doesn’t use embedded steel rails. It doesn’t need ’em; Ruger says their formulation is stronger than the nylon many other makers use, the frame rails are large enough and strong enough to stand up on their own, and the Ruger rep I discussed the pistol with told me he’d heard from internal sources that it may even compete favorably with the alloy-railed frames on the P93 & P94 in long-term use. 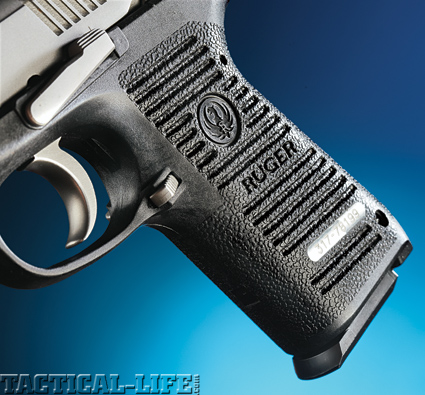 The pebble-grained polymer grip helps keep the gun light and strong—and in your hand, while providing a textured, non-slip grip area.

The slide is equally hefty, and the barrel has held up under both factory testing and actual field use far beyond what most users are likely to put through it, both in round count volume and up to standard and +P commercial pressures. Done right, as Ruger is famous for in their Pine Tree casting facility, there’s absolutely nothing wrong with a cast part. You get the function without the high cost involved in more traditional (and more expensive) pistols.

When I picked up the test sample at my longtime Ruger-certified gunsmith’s shop, we looked it over and I gave him the usual “What do you see breaking on these?” question that is part of my regular act in picking up a model that’s been around for a while. The response didn’t take much thought—“It’s like the Savage rifles… they just keep on going.” And that included police trade-ins through his hands over the years that came in looking less than pretty, but still did everything they were supposed to do. The only repetitive fault he’s found is that the magazine release lever doesn’t tolerate being pushed forward on both sides simultaneously very well—since there’s no need to, don’t. Otherwise, you should realistically expect the P95 to chug along for many years and many miles. 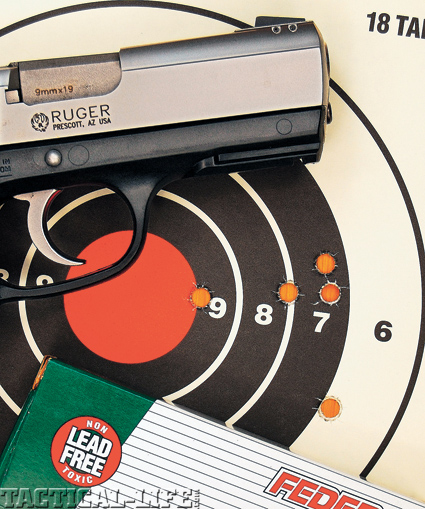 Range Time
On a sunny day after an extremely wet and cool spring, seven loads at 25 yards on black bulls in the gravel pit did extremely well at that distance, which didn’t come as any real surprise. Off a rest, Federal’s 100-grain BallistiClean JSP pulled off the best 5-shot group at 2.12 inches, and Black Hills’ 124-grain JHP was the most consistently tight from group to group. In fact, all but the Winchester USA white box 147-grain JHPs were capable of staying under 4 inches. This “bargain-priced” Ruger at $393 in blue and $424 in stainless can hold it’s head up among far pricier pistols with far “loftier” pedigrees just fine in the accuracy department.

That session in the pit was actually done along with two other test pistols from other makers, for other projects. The first was a rimfire pistol that had nothing but jam after malfunction after failure, the second was a sub-compact 9mm pistol with a two-finger grip and a stiff double-action-only trigger. The Ruger was last, and after the frustration of the first pistol and having to concentrate so strongly on maintaining sight picture through the long DAO pull on the second while hanging onto the little critter under recoil, the P95 was nothing but relaxing and a great way to end the day. Bullet weights from 100 on up to 147 grains and FMJs, JHPs, and JSPs all blew through it like butter, the grip is comfortable, the sights are visible, the DA trigger was smooth with some barely noticeable stacking before the break, the single-action pull let go at 5 pounds with minor creep, and recoil was very easy to deal with. With zero malfunctions, the 95 proved to be very shootable gun.

Final Notes
There are some things to consider when buying one of these. Trimmer than its P85 ancestor, the 95 is still a fairly thick pistol between the frame dimensions, the safety levers, and the protruding slide lock lever. If you’re looking for a concealed pistol, just be aware this one won’t ride as flat as some others. On the other hand, with the stainless version tested, the corrosion resistance that comes in the grey plastic Ruger box may balance that out for coastal dwellers and Everglades residents. The slide-mounted safety/decocker is not the most efficient for run and gun games or week-long pistol classes, but as a nightstand or home-defense gun where bumps in the night rarely result in sustained firefights, 16 rounds of premium 9mm fodder is unlikely to be an immense handicap without multiple speed reloads. In fact, several years ago the P95 was the one I recommended to my non-gunnie brother as his “one and only” household handgun for just that purpose. Didn’t tie up a lot of money, worked fine for him then, still does, and the DA trigger is safe and simple for him.

The only complaint I had during the 95’s time in the sun was that I couldn’t fill up the stainless double-stack factory magazine. Being the kinda guy who doesn’t ask for directions on the road and snorts at artificial aids at the range, I’d left the magazine loader back home in the office. On due reflection, I’d advise not forgetting the tool when loading new magazines for this Ruger. Spring tension usually lightens up with use, but starting out it’s a bugger. As a house gun, range gun, beginner’s gun, or camp gun, the P95 remains a bargain. Find out more by visiting ruger.com.