0
SHARES
41
VIEWS
Share on FacebookShare on Twitter
Building on the strengths of the 9mm SR9, the new Ruger SR40 takes the popular design into big-bore territory.

There is a reason that Sturm, Ruger & Company has been named “Handgun of the Year” for the last three years by a variety of groups—the company is constantly giving the public what it wants. Unlike other companies that try to modify their current product(s) and hope they hit on something that will prove popular, Ruger is not afraid to go back to the drawing board and start fresh. Additionally, they are not afraid to say they made a mistake and fix it without trying to call the problem an “upgrade” or “ammo related.” For many years, Ruger enjoyed their spot as “America’s gun maker,” manufacturing sporting and general-purpose firearms that were over-built and reasonably priced. Many thought of them as the “Mom and Pop hardware store gun,” a gun that would work on the ranch, in the field and even in the nightstand if required. For the most part, Ruger did not pursue the government market (military and law enforcement sales), leaving that to other companies that were already well entrenched in that arena. Not anymore. 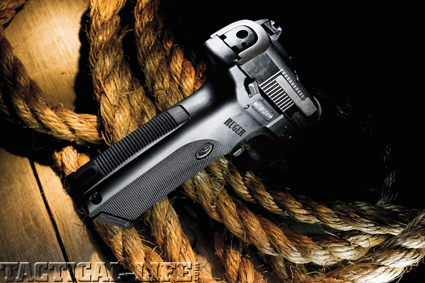 The SR40 features an extremely thin grip profile despite the fact it is a double-column .40-calilber pistol. Note the interchangeable backstrap.

In recent years, Ruger has begun to introduce a line of what I call “combat capable” (combat defined as “to fight back”) arms that are specifically intended for personal security or law enforcement applications (of course, a gun that will work for cops has military potential as well—as the SR556 has proven. The militaries of several friendly nations are currently looking at the gun for possible adoption). Guns like the super-popular LCP .380, LCR .38/.357, the service-grade SR9 pistol, its little brother the SR9 Compact, the SR556 (5.56 and 6.8) and the newer “tactical-grade” versions of the Mini-14 and Mini-30 rifles are certainly police-capable. 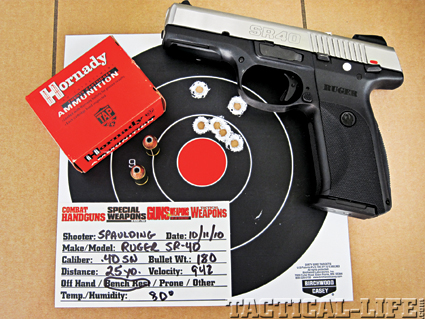 If we take a look at what many legally armed American citizens are currently wanting in a carry pistol, you will find that a reasonably sized .40 caliber semi-autoloader is one of (if not the) most popular choices currently available. Guns like the Glock 22 and Smith & Wesson M&P in .40 S&W are both what the law enforcement and concealed carry communities are looking for. This being the case, is it surprising that Ruger has just introduced a service-grade, trim, light, easy to shoot striker-fired autoloader in .40 caliber?